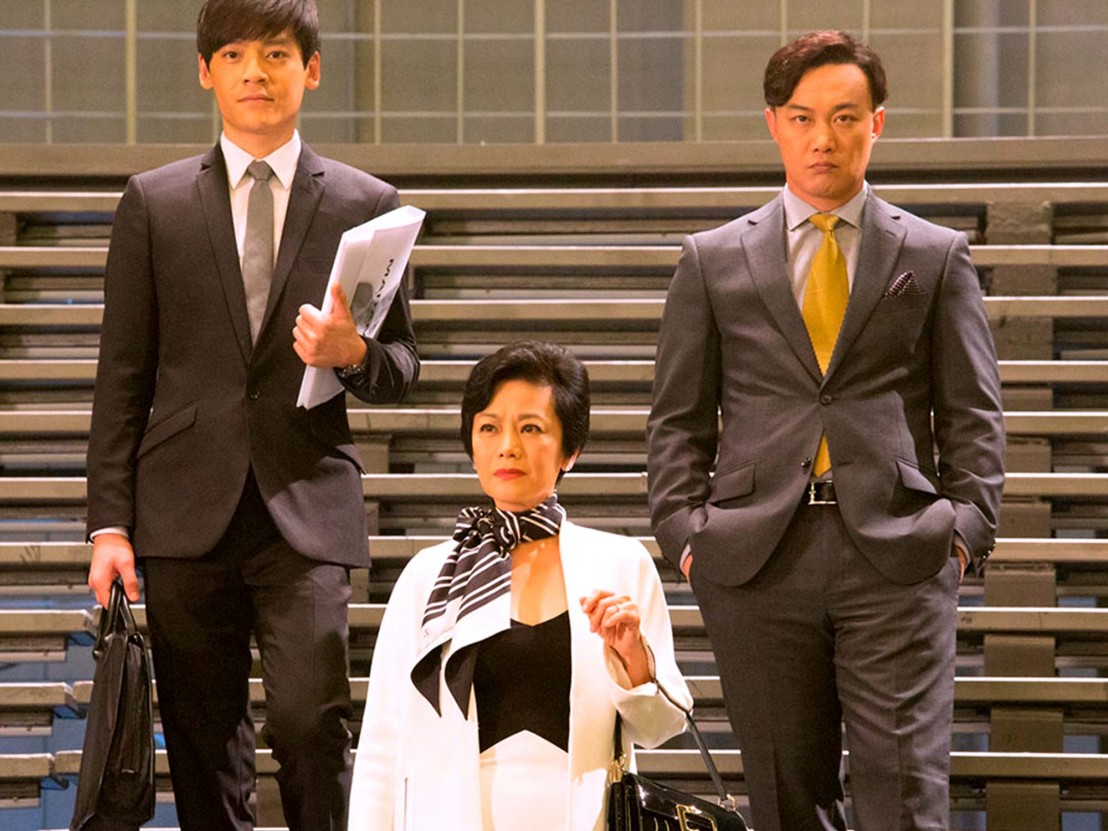 Hong Kong maestro/workhorse Johnnie To has adopted a tranche of visual cues from the De Stijl and cubist art movements of the early 20th century to envisage a cinematic microcosm that is at once wide open and claustrophobically enclosed.

Set entirely on an exposed sound stage where spotlights on the ceiling constantly dip into view, Office chronicles three months during the financial meltdown of 2008 in which the employees of jolly, song-and-dance prone investment firm Jones & Sunn, overseen by Chow Yun-Fat’s moustache-twirling chairman and Sylvia Chang’s no-shit CEO, are forced to roll with the geopolitical punches and weed out those taking advantage of their privileged positions.

It’s a light ensemble comedy in the classical Hollywood mode, trapped somewhere between the ’30s and the ’80s, with a large ensemble of go-getting corporate stooges zinging off one another as To’s camera flutters around the office with a bombastic, God-like command of space. It’s a cautionary tale of collective malpractice and personal greed all converging at a moment which helped set about the global economic downturn, and the production design (by regular Wong Kar-wai collaborator William Chang) opts to remove all walls from the aesthetic equation as a way to emphasise that, even though it’s a culture which thrives on secrets and subterfuge, there really is nowhere to hide your dirty laundry.

The film wears its theatricality openly (it’s based on the stage play Design For Living written by its star, Chang), with symbolic appropriations of items such as desks, chairs, trains, anything that might be considered furniture, standing in for the real things. They resemble colourful wrought-iron sculptures intended as a shorthand for an actual object, a creative decision which emphasises the fact that such items no longer register in the lives of these people whose only interest is in numbers on a spread sheet. The only “things” which are real are those that do matter – the suits, the cars, the jewellery and the rolling banks of computer monitors.

To treats this story with a rarified elegance seldom seen within this spare setting, employing every frame as a unique 3D canvas with which to plunge layer on top of layer on top of layer. Characters segue randomly into song, though the subjects covered are related more closely to the inner/private lives of individuals rather than just direct commentaries on what’s happening in that moment.

Surprisingly, it’s the slow ballads – which crop up with more regularity at the latter part of the film – rather than the sprightly pop songs that are more affecting, convincing and emotional. In order to offset this climate of cork-popping avarice, two young go-getters are brought into the office, blithely unaware of the kind of savage practices they’re expected to adopt. That they don’t is perhaps a sign of To/Chang suggesting that, when the economic shit did eventually hit the fan, there were innocents among hoards of sweaty, manipulative wrongdoers.

There’s often been a musicality to the way To shoots and edits, though in this instance he pushes that musicality to the fore, making sure digital beeps of mobile phones and the tense constant of ticking clocks (including one giant revolving timepiece in the middle of the office), remains high in the sound mix. There a numerous what appear to be direct references to Jacques Tati’s Playtime, not least in a sequence where the young clerk is seen in a boxy fishbowl apartment identical to the one into which M Hulot is invited by an old army buddy.

In addition to that, To overlays natural sounds to the unnatural settings, so you can hear the air con when “inside” and you can hear the wind and the passing cars when outside. It’s one of a number of simple but brilliant touches in this captivating oddity.