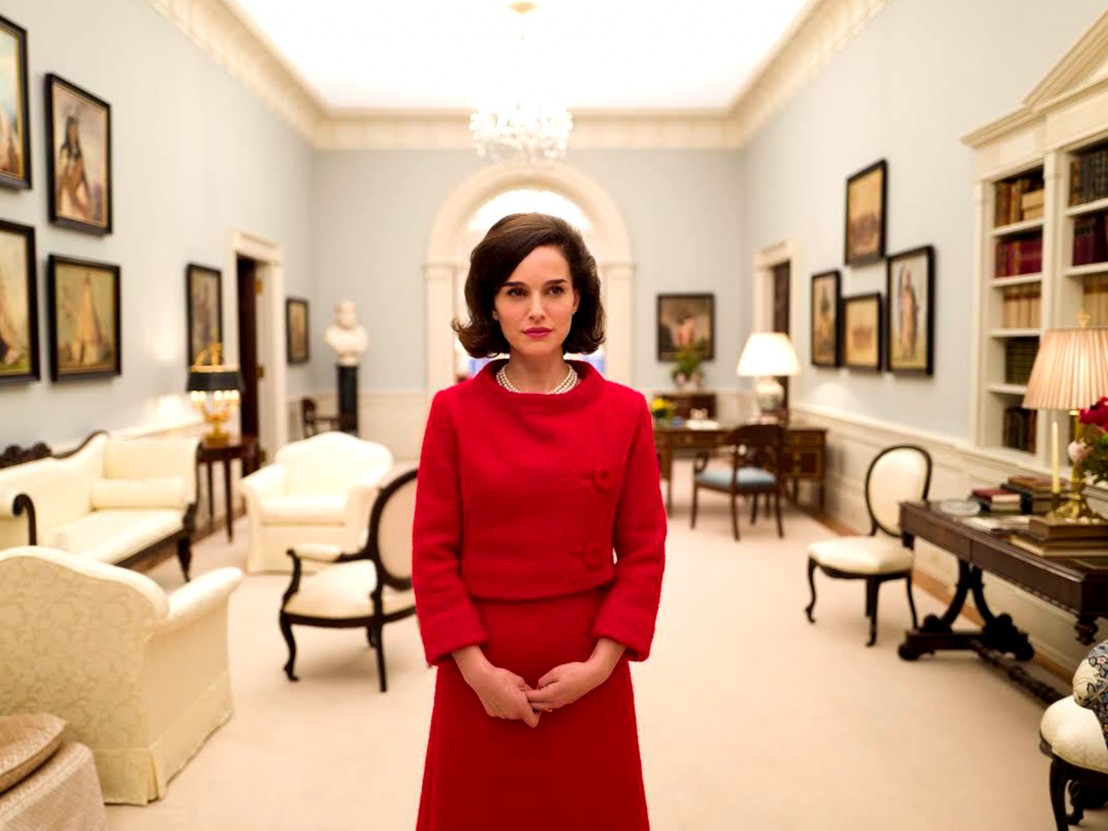 There’s a sequence in Chilean director Pablo Larraín’s astonishing English language debut that imagines Jacqueline Kennedy roaming around the White House gulping Stoli, chain-smoking and mourning the loss of her husband and her life as she knows. The scene evokes the desperate sadness, driving home her grief with a resounding profundity.

The dark period shortly after Jackie became a widow is in safe hands here, as the astute and politically engaged Larraín refuses to bend to period biopic convention. The director previously showed his adeptness at bringing humanity, passion and a strong sense of time and place to complex dramatic narratives with 2012’s No. Here Larraín and screenwriter Noah Oppenheim boldly speculate on Jackie’s state of mind through fragmented memories which are elegantly piece together to form a rich character study.

With any drama that represents real-life figures there’s always the danger that the cast might veer towards hammy mimicry. Larraín does not allow that to happen and with the casting of Natalie Portman in the lead role, not to mention the talented support of Peter Sarsgaard as Bobby Kennedy and Greta Gerwig as confidante and secretary Nancy Tuckerman, he thoroughly succeeds in creating an intimate and gripping portrait of the iconic First Lady.

Portman switches gracefully between putting on a controlled public face and letting her emotional guard down in private. While speaking to a reporter, played brilliantly by Billy Crudup, who nails the cynical glances and leading questions of a journalist in search of a scoop, she only breaks down once but still edits that out of the article. Oppenheim’s script paints their interactions as two worthy opponents engaging in a game of chess, as they sit combatively opposite one another across a dining table and on a terrace. Gerwig’s tender turn is of particular note owing to the nature of her character’s close friendship with Jackie during this difficult time.

Both Jackie’s emotional state and historical legacy are placed under the microscope as the film lays out the reasons for her redecorating the White House, a project that became haphazardly costly. Behind closed doors Jackie’s isolated release of anguish is woozily conveyed via Mica Levi’s (Under the Skin) disorientating string compositions; a shower scene in which the camera holds its gaze on Jackie as she washes blood from her body is particularly haunting.

The attention to detail of the costume design, particularly Jackie’s ball gowns and wool Chanel suits, including the candy pink one she wore the day John was assassinated, is particularly impressive. As is the décor of the White House, which is introduced via a black-and-white reenactment of a televised 1961 tour of the building led by Jackie. It isn’t until much later that Larraín shows us the horrific ordeal she experienced in Dallas  on 22 November, 1963 in full detail.

Standing beside her husband’s casket, Jackie thinks back to the shock and horror of cradling his head in the motorcade and Larraín expertly whisks us back to that infamous moment in history, thrusting distress and panic out of the deathly silence. Earlier in the film, exhilarating images of the car zooming to Parkland Hospital are shown from behind, the black jacket of Secret Service operative Clint Hill blowing in the wind as America’s bright future fades into the distance.