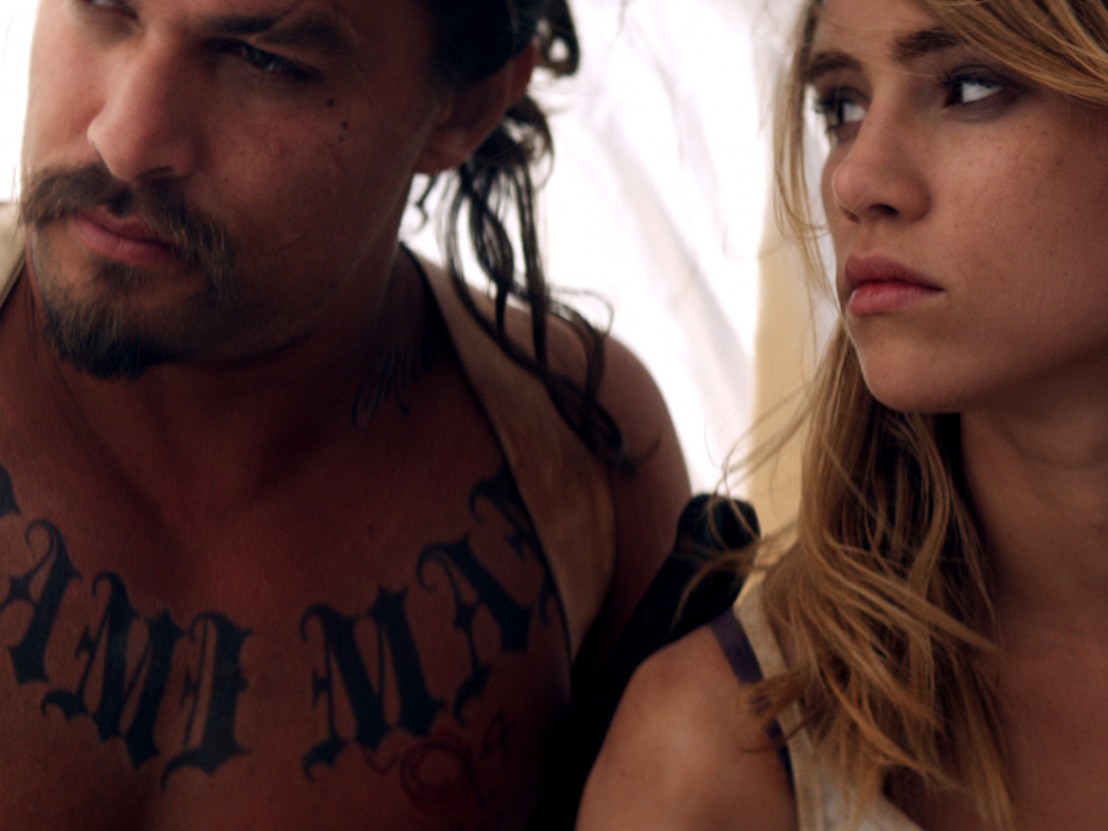 Ana Lily Amirpour’s follow-up to the ravishing A Girl Walks Home Alone at Night envisions an America where those deigned unworthy of residing on home soil are turfed out to a dusty wasteland on the border of Texas. These ex-citizens, referred to simply as “the bad batch”, are branded with a unique serial number and forced to fend for themselves in this harsh terrain.

Arlen (Suki Waterhouse) navigates across the desert in her tie-dye jean shorts and baseball cap searching for a promised land – until she is captured by a couple of vicious cannibals who hack off a couple of her limbs to grill on their BBQ. In order to escape she slathers herself in shit, smacks her captor over the head with a metal bar and skateboards to safety. A drifter then finds her lying in the punishing sun and leads her to a makeshift town called Comfort, which is secured by cargo containers and a large fence. Five months later Arlen has settled in to her new home and been gifted a prosthetic leg, but she soon starts to question Comfort’s moral fibre and wanders off in search of something else.

Outside of the compound is a place known as “the Bridge” where the cannibals reside in hollowed out airplanes and trailers. Mad Max is a clear influence, though Amirpour’s film possess neither its furious pace nor an enthralling heroine of its own. Instead the director delights in summoning the spirit of a range of ’80s B-movies. Jason Momoa takes the role of a Cuban maneater who sports a giant tattoo displaying the words ‘Miami Man’ on his chest. He’s a silent, brooding artist who listens to Culture Club on his Walkman and sketches beautiful drawings.

In the introduction to the Bridge, the camera lingers over a mass of oily bodies working out, posturing as if they are on Muscle Beach. Saxophonist Tim Cappello from The Lost Boys wouldn’t feel out of place here. Comfort has more of a grimy Escape from LA vibe to it late at night but this is very much Amirpour’s own neon-lit vision. A giant stereo on wheels where a DJ (played by Diego Luna) spins heady tunes on vinyl (much of the music is provided by electro band Darkside) is the hub of the town. Flash motorcycles and golf carts provide transport for the disenfranchised.

Keanu Reeves is given the moniker of “the Dream” in the closing credits. He’s a slimy character who is essentially the King of Comfort. He commands an army of pregnant machine gun-toting women who hand out acid as if it were communion. Amirpour presents him as a cult leader of sorts who dresses all in white and distracts his residents with the power of partying. This is a seductive world where the streets are littered with glittering VHS tape, but Amirpour spends too much time gliding her camera over barren landscapes, naked flesh, sparkling skies and hectic parties.