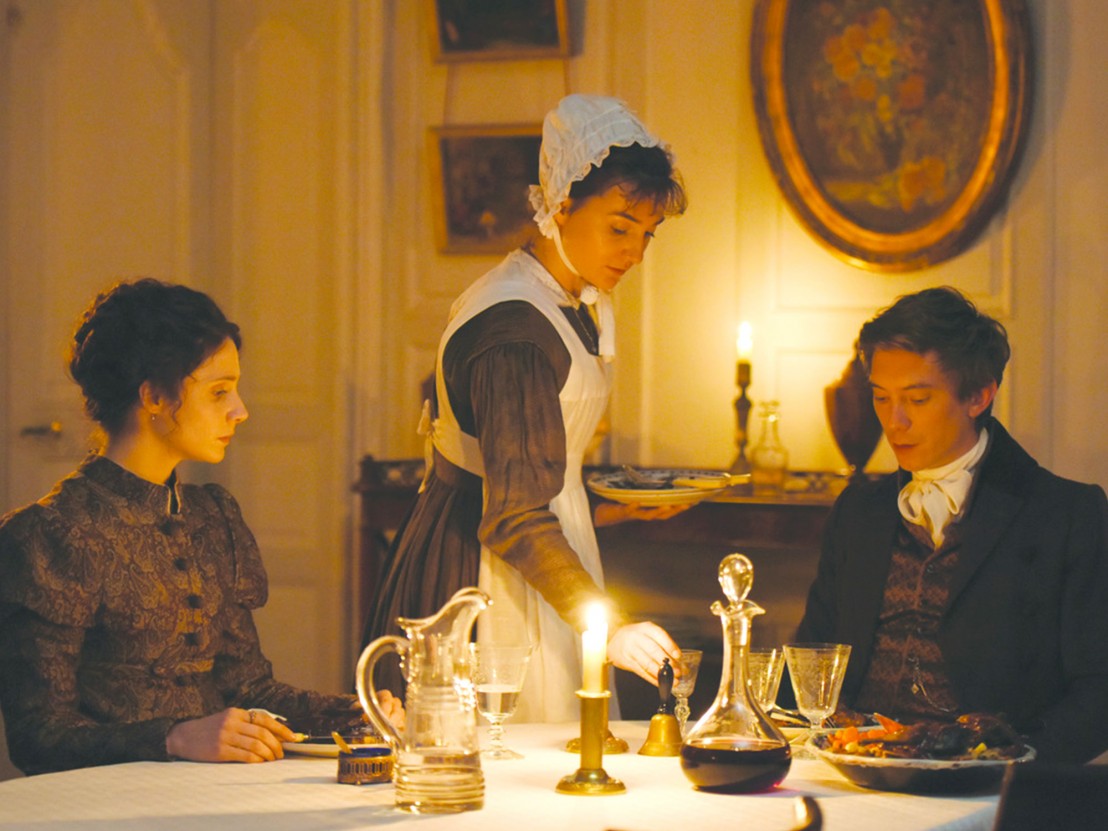 Stéphane Brizé has crafted an immaculate adaptation of Guy de Maupassant’s debut novel that thoroughly succeeds in bringing the French author’s realism to the big screen in suffocating Academy ratio (1.37:1). A study of ideals and isolation beginning in 1819, Normandy and extending over a lifetime leads the viewer deep down into the pits of despair along with its naïve protagonist Jeanne Le Perthuis des Vauds (Judith Chemla).

Brizé employs a non-linear format switching between different time periods in Jeanne’s life, with close-ups of her pensive, smiling and bitter face filling the frame. We first meet her plucking crops in the sunshine with her father on one of their farms as birdsong fills the air. She’s young, carefree and has just returned home from a convent school where she was restricted from seeing her sweet and caring parents (played by Jean-Pierre Darroussin and Yolande Moreau) so valued was her education.

But it’s not long before we see Jeanne wrapped up against the howling wind and rain, trudging through the mud and weeping in anguish. The question of how she got to such a miserable place is answered via tortuously sad encounters and intermittent snippets of glorious happiness that are snatched away before the viewer can get too comfortable. With the focus on how unfair life is to Jeanne and how it wears her down however this makes for a gruelling watch.

Jeanne’s life is dictated by a patriarchal system and after marrying Julien de Lamare (Swann Arlaud) it is up to him to ensure their business and social lives are in order. The thing is he turns out to be a philandering scoundrel who is only interested in keeping up appearances and making money. Jeanne searches for counsel with the local parishioners who all advise her that forgiveness is the best route and even blame her for being complicit in her husband’s deceitful ways. She gives birth to a selfish, whiney, entitled son who throughout his lifetime runs up huge debts and endlessly borrows money from his mother. Jeanne spends her entire life trying to please men who don’t care about her and friends who betray her.

There’s no faulting any of the players in this exquisitely crafted period piece. Lead actress Chemla is mesmerising whether she’s joyfully cradling a new born baby, swaying on a cliff overlooking a sun dappled ocean or seething by a crackling open fire as her husband lauds his power over her. Arlaud ensures Julien is a nefarious presence while Darroussin provides warming comfort as Jeanne’s father.

Brizé makes much of Jeanne’s relationship with nature and her moods as they change with the seasons. His dedication to expressing the way in which Jeanne’s soul is ravaged via savage backdrops is impressive. A startling scene which places the handheld camera over still porcelain white, blood splattered corpses is eerily effective and haunting.

The pain and suffering of Jeanne brings to mind Lars von Trier’s Dancer in the Dark – another portrayal of a woman whose life is governed by cruel circumstance. Unlike Von Trier, however, Brizé allows a ray of hope to pierce through the gloom. A Woman’s Life boasts its own punishing intensity, but the fact that Brizé ends with a one-line platitude that serves no other purpose than to state the obvious is groan-inducing.