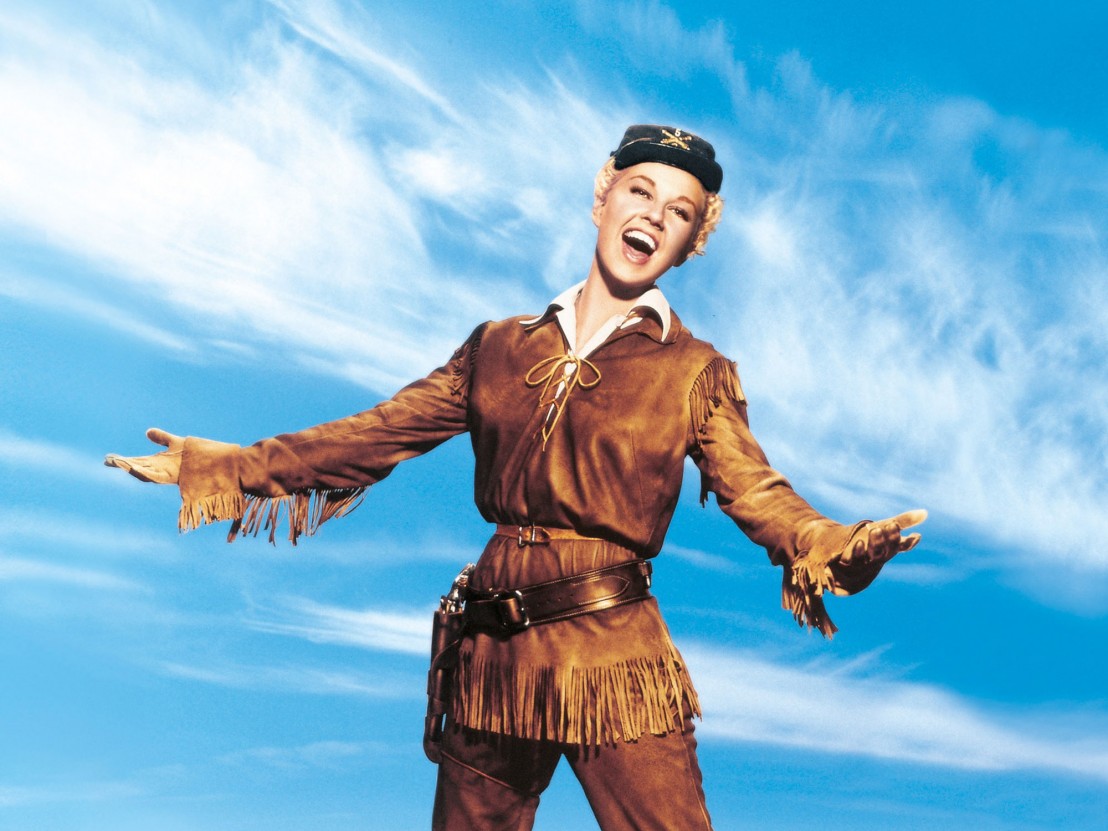 Released in 1953, Calamity Jane was Warner Bros’ answer to Annie Get Your Gun, MGM’s smash success from 1950. It’s hard not to compare the films, especially given that both are set in America’s wild west, feature sharp-shooting and rambunctious female leads and Howard Keel in the leading male role. Yet despite certain superficial similarities each film represents a very different set of ideals.

Annie Get Your Gun follows the MGM musical guidelines to a tee. It’s a bright, comic and theatrical representation of the Old West with gloriously camp Technicolor settings where anyone who can sing, does, in perfect harmony. With Irving Berlin’s beautiful compositions, glitz and glamour it was a sure fire hit that lifted audiences out of their World War Two blues.

Calamity Jane is a complete contrast. Unlike Berlin’s chirpy tunes (which though beautiful are only really meant to entertain) Sammy Fain and Paul Francis Webster’s songs are carefully crafted to raise questions over and celebrate what it is to be American. The film’s Oscar-winning song ‘Secret Love’ was adopted as an anthem for the LGBT community and in 1999 entered the Grammy Hall of Fame for songwriting. However, it is not just this song and it’s challenging of gender roles that makes this musical an enduring classic. Listen to the rest of the soundtrack today and it becomes clear that Calamity Jane is one of the greatest love songs to America ever made.

Right from the get-go Calamity Jane does something different from most musicals of the time, instantly plunging us into old America. The lyrics are not concerned with introducing Jane though, she bursts on to the screen in her own whip-cracking way. Instead, like many of the songs throughout the movie, the lyrics are about travelling home, getting back into the community and celebrating the life you have. Images of porcupines, fizzing sarsaparillas and the light of the silvery moon create a comforting atmosphere. The music itself, with its rolling, constant beat, places the song in American folk territory.

The song’s use of the pentatonic scale adds an element of Indigenous American culture into the mix. This aspect of American history is referred to throughout the film, both positively and negatively. Bill Hickok famously dresses up as a Native American chief when he loses a bet to Jane and there’s an excellent scene of heroism when Jane saves Lieutenant Danny Miller from being captured, but to say that the film paints this culture in a purely negative light is unfair. Unlike Annie Get Your Gun, where Indigenous Americans are continually the butt of the jokes, there is an acknowledgment and respect towards their heritage in Calamity Jane which is made clear through the music and lyrics.

‘The Black Hills of Dakota’

When Calamity Jane was released, America was in a state of flux. In early 1953 the first nuclear tests were conducted in Nevada, the Korean War had come to an end but America was still embroiled in the Cold War. American audiences were crying out for peace, and this song represents a call to return to simpler times. Sung by the entire cast en route to a dance, the lyrics paint a stunning image of the iconic American landscape and convey a message of hope.

It is undeniably sentimental, with themes reminiscent of Bing Crosby’s ‘I’ll Be Home For Christmas’, a song that was banned in the UK by the BBC during World War Two for this very reason. As a standalone song, ‘The Black Hills of Dakota’ casts America in a reminiscent light. It’s no wonder it resonated so much with the American people – like ‘The Deadwood Stage’ it paints America as not just a nation but a state of being.

As a character, Calamity Jane is presented as an equal to her male counterparts. When she is ribbed by her friends in The Golden Garter, it is not because she is a woman but rather because she’s prone to tall tales and mistakes. She is able command their attention, as in ‘Just Blew in from the Windy City’ when all she has to say is “whistle” for around 50 men to start whistling in perfect unison while she soft-shoes around the place. Transitioning from this to gaily singing about home renovations is a bizarre concept for Calamity Jane, and although a gloriously entertaining part of the film, it sticks out as an example of 1950s modernity. It’s also perhaps the most “Doris Day” of all the songs in the film, both musically and lyrically.

Interpreted one way, it could be argued that Fain and Webster are saying that a woman’s place is in the home. However, this is too simplistic given that all the lead female characters are self made and don’t rely on men to survive. Moreover, although Calamity changes her appearance after singing this song, she doesn’t let the materialistic changes in her life affect who she is as a person. For all of its saccharine imagery and jolly melodies, ‘A Woman’s Touch’ is a celebration of the American woman and her impact on the country’s modern history.

A special Calamity Jane Sing-A-Long is in cinemas from 8 April courtesy of Park Circus. 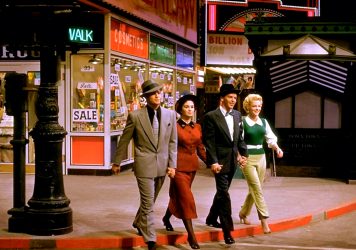