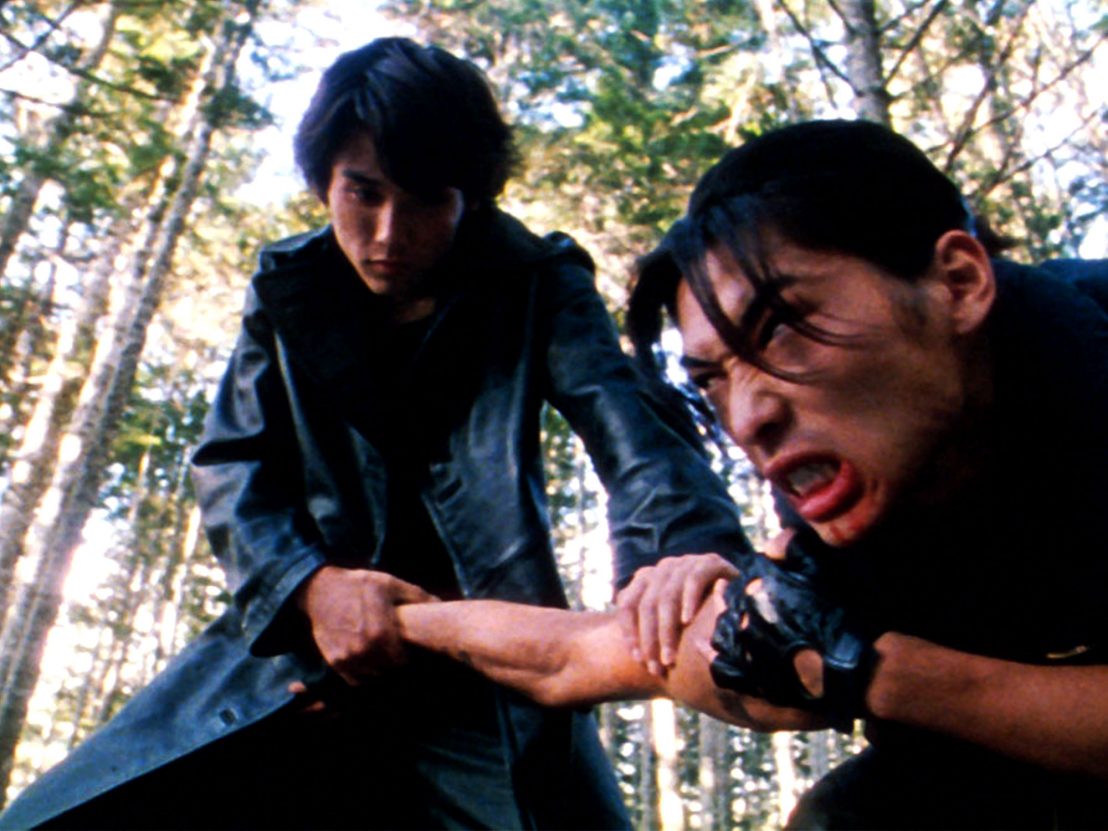 It’s some years since ‘Asia Extreme’ took Blockbuster shelves by storm, where every horror movie wanted to be the new Ring, and anything Japanese and violent was marketed as a Y2K Video Nasty. Most of those lacklustre copycat titles have been forgotten – but Versus certainly hasn’t. Here is a film that didn’t so much fit the trend as tear it a new one.

A zombie-samurai-action movie hybrid made on a $10,000 budget in a forest somewhere in Japan, Versus was the product of an overly-ambitious film student who, until then, had spent more time singing in rock bands than actually going to filmmaking classes. But when Ryûhei Kitamura finally did get around to making his feature debut, he had his eyes set only on the big time.

Refusing to stoop to the low-risk V-Cinema market after producers proved unwilling to fund an all-out action feature (Hollywood and Hong Kong action flicks reigned supreme in Japan), writer-director-producer Kitamura decided instead that he’d just do it all himself. They told him he would never get away with it. Well, guess what? He did.

Set in the mysterious “forest of Resurrection”, the film follows two escaped convicts as they clash with a yakuza gang burying bodies at a nearby clearing. Due to a geographical oversight – the forest lies atop a portal to hell – the dead begin rising from their graves, resulting in a three-way brawl involving pistols, swords, backflips and buckets of blood. The battle lasts for most of the first half of the film.

All the while, a pair of hapless government agents (one of whom has mastered “all forms of martial arts”) are on the hunt for the escapees with some genuinely huge guns, and an ancient deity with a centuries-old grudge turns up to bring some extra heat. It turns out that one of the convicts was the latter’s nemesis back in feudal-era Japan. Cue more fighting.

The acting is cheesier than a box of fully-loaded nachos, with the comic book-style yakuza gang leader, dressed in a green-and-purple suit, the worst offender. Other characters are distinguishable by visual presence rather than acting merit: our leather trench coat-clad protagonist offers stereotypical tough-guy cool; a gangster henchman spends the duration of the film having an extended panic attack. There’s also a detective with one hand, a textbook damsel in distress, and a guy with red hair who… has red hair.

But no one comes into Versus looking for a complex plot or characters. Back in the day, it was the film’s gnarly poster – a silhouetted man wielding both a sword and a gun – that was the clincher. Those who had seen the trailer (included on the Japanese trailer reels bundled on countless imported DVDs from the early 2000s) were enticed by the promise of zombies, kung fu and excess gore. What they found was pure filmmaking spectacle – in the words of the director, “a movie about the biggest fight in the world.” This was low-brow filmmaking at its mind-boggling best.

Mexican stand-offs, decapitations and slow-motion fistfights notwithstanding, the most impressive thing about Versus is that it’s actually entertaining for a full two hours. There’s bullet-time, comic relief and breakbeat techno music. There’s a scene where a man punches through another man’s face and snatches his eyes out. There’s an epilogue set in the future! And all the while, Kitamura and his crew demonstrate a genuine affinity for action cinema, combining real stunts and dynamic camera movements plucked straight out of the John Woo playbook.

The film’s greatest achievement, however, is how perfectly it captures the sense of fun that goes into making a movie. Versus is carried by a cast who had to double as on-set chefs, production assistants and stunt co-ordinators in order to finance the film – and they all had so much fun that they did it all again a few years later, shooting a load of extra footage for an expanded release. It’s a B-movie masterpiece, a bargain bin classic, and the stuff of legend. See it now, and don’t ever look back.

Versus is available on Blu-ray from 7 December via Arrow Films.