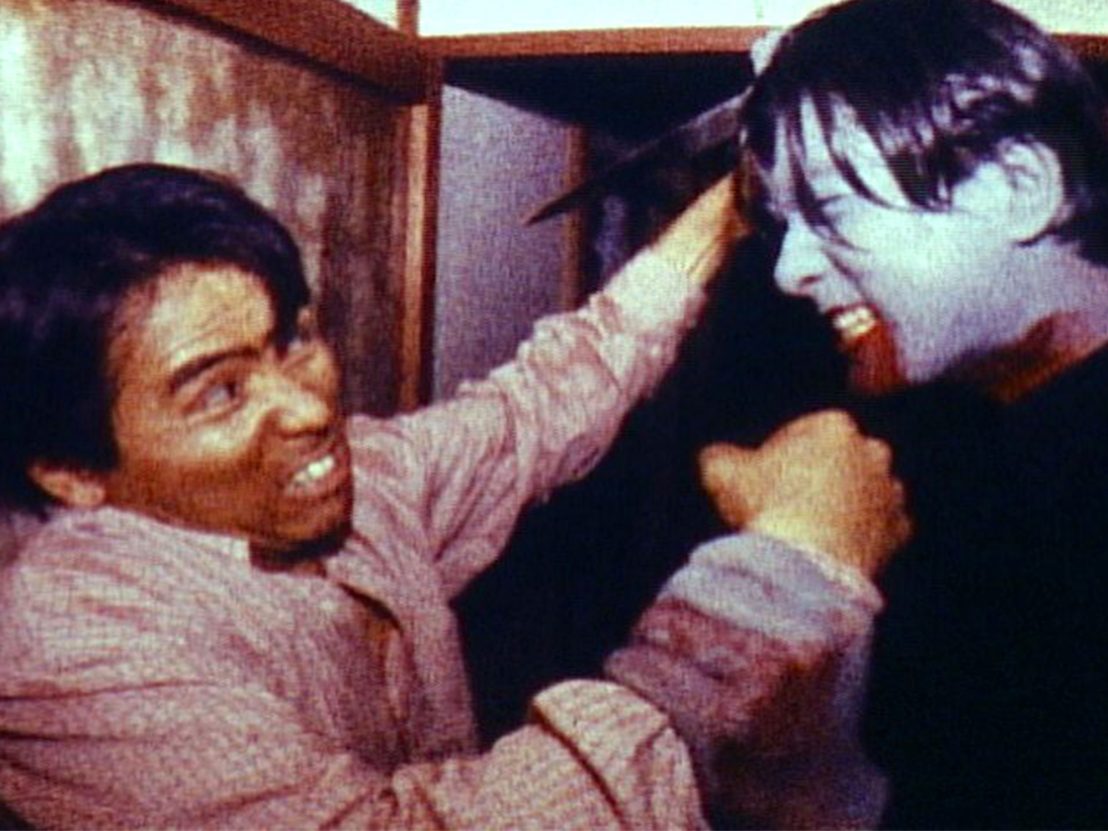 Deriving from the French for ‘lover’, amateur is a word that comes with a double edge. On the one hand, it can suggest the sort of incompetence and ineptitude that you just would not accept from a professional artist. On the other, it can conjure the image of the outsider artist, driven by pure passion – and more obscure impulses – to create a labour of love outside of any production system.

Opening with a vicious argument between lovers that ends in a messy murder, Bloody Muscle Body Builder in Hell is most definitely an amateur work, made over several decades by its director/writer/star Shinichi Fukazawa, shot on Super-8 (the choice of amateurs) and using only a panoply of simple yet effective practical effects, some basic stop-motion techniques, and a lot of fake blood.

The plot is simple. Naoto (Fukuzawa) receives a phone call from his ex Mika (Asako Nosaka), whose dumping of him a year ago had led him to quit his job and devote himself to body building while living off the legacy of his recently deceased father (also played by Fukuzawa). Mika is a photojournalist putting together an article on the paranormal, and she remembers a photo that Naoto had once shown her of a house with an outsized female face smiling in its window. So the reunited pair pays a visit to the house – a part of Naota’s inheritance – with Mika’s colleague the psychic Mizuguchi (Masaaki Kai) in tow.

Only, as the prologue reveals, Naoto’s dad had murdered his lover there 30 years earlier in the early ’70s, and buried her corpse beneath the floorboards. Now she is determined to find new flesh and build her own bloody muscle body, so that she can execute a vengeful grudge against those that she has locked in the house with her. The only way to end her curse is through radical dismemberment and the judicious use of gym equipment…

If at first it seems a peculiar merger of the windows from Pupi Avati’s The House With The Laughing Windows and the lo-fi DIY insanity from Nobuhiko Obayashi’s House, very quickly the genre-savvy Bloody Muscle Body Builder in Hell establishes itself as a Japanese homage to the ultra-low-budget exuberance of Sam Raimi’s The Evil Dead, as Naoto must cut his demonically possessed companion into tiny pieces, and even, having armed himself, delivers the iconic Ash-ism “Groovy”.

Mixed in there are also plenty of allusions to other films: there is the rotten corpse using the flesh and blood of the living to reconstitute itself from Hellraiser; the animated severed hand from Evil Dead II; the spider creature formed of a disembodied head from The Thing; and even the shirt burst and ripped by flexing muscles from the Incredible Hulk. That is a lot for a single film to accommodate, especially in 61 minutes, but the small house bequeathed to Naoto comes with many rooms.

Fukuzawa started his script in 1995, but after struggling to finance both production and post-production, he was not able to complete the film until 2009. It was released independently in Japan in 2012, and then a slightly altered version (indeed, the ‘complete edition’ found on this DVD release) enjoyed a brief theatrical release in 2014, followed by the official Japanese DVD.

It is a rough-hewn throwback to a pre-CG era when straight-to-VHS productions were cheap and tawdry, with low-grade stock and poor lighting all contributing to the air of, well, amateurishness. Although that is of course the whole appeal of this film, which plays out its absurd plotting and over-the-top gestures with a sincerity that only adds to the sense of old-school authenticity. Put simply, despite, or even because, of all its naïve, straight-faced earnestness, Bloody Muscle Body Builder in Hell comes with real heart – not to mention kidney, liver, intestines and brains…