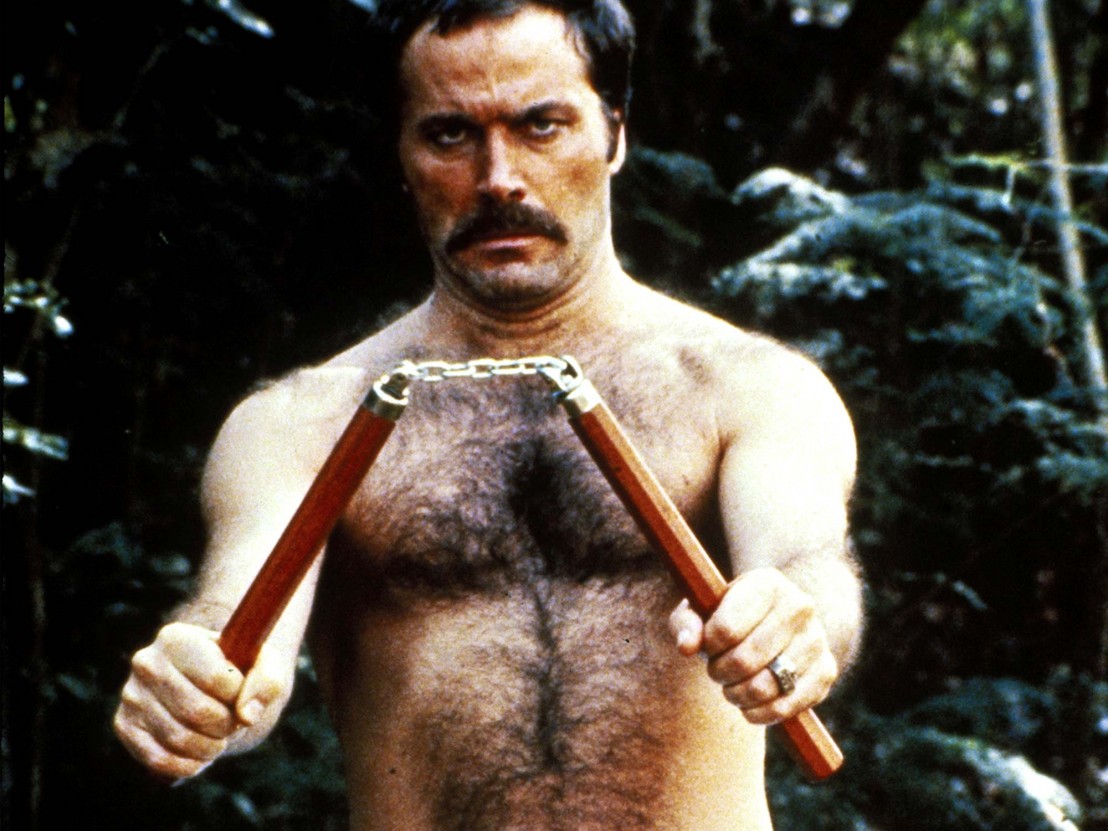 Sometimes genus and species can be difficult to pin down. Take the brand of cinema known broadly – very broadly, in fact – as ‘psychotronic’, a term first appropriated by Michael Weldon from the 1980 cult SF flick The Psychotronic Man to describe films “traditionally ignored or ridiculed by mainstream critics at the time of their release: horror, exploitation, action, science fiction, and movies that used to play in drive-ins or inner city grindhouses.”

Psychotronic cinema is a hard and loose category of termite art which, whether because too shamelessly genre-bound or just too wacky-backy niche, occupies the critical margins. Still, exploring is always best done at the outer edges – and so this column will be dedicated to direct-to-video dross, disinterred B pictures and the odd (and we mean odd) films orphaned at the festival fringes.

The so-called Ninja Trilogy comprises Menahem Golan’s Enter the Ninja from 1981, and Sam Firstenberg’s sequels in-name-only, Revenge of the Ninja (1983) and Ninja III: The Domination (1984), all unified by the appearance of actor and real-life practitioner of ninjutsu Sho Kosugi (playing a different character in each title), and all rightly celebrated as showcases for the most egregious, ’80s-inflected cash-in excesses of Golan and Globus’ Cannon Films. Though the groundwork was laid by 1980’s The Octagon, it was these three films that began a veritable explosion of ninja presence in mainstream action flicks.

The very title of Enter the Ninja riffs on/rips off the East-West martial arts clash of Enter the Dragon, and the opening credits boast a fetishisation of Japanese weapons and techniques that would pervade the trilogy. Yet as recently certified ninja Cole (played improbably by the original Django, Franco Nero) intervenes to defend an impotent rancher and his wife against a ruthless land-grabber, Enter the Ninja proves to be as much oater as assassin’s actioner. Christopher George makes for a hilariously camp villain, dedicating his free time to choreographing female synchronised swimmers in his office swimming pool. Who knows where the flashbacks to Cole’s Angolan Bush War experience fit into all this – but the anything-goes approach to genre is key to the whole trilogy’s charm.

Indeed, genre ran even freer in the sequels. Altogether gorier, and featuring a masked killer who takes out his opponents one by one, Revenge of the Ninja appropriates part of its form from the then-voguish slasher (“What is this, Halloween?”, a character is heard to ask), and part from the gangster flick. One sequence shows Kosugi’s Japanese migrant facing off against a hatchet-wielding Native American, another sees him taking on the Village People in a children’s playground – and there are not one but three scenes of violence set in and around that great signifier of Eighties affluence and eroticism, the hot tub – the last of these, somehow, in the middle of the thrilling roof-top climax.

Craziest of all though is Ninja III: The Domination, which somehow combines a now unstoppable (and not remotely stealthy) ninja killing machine with an exorcism motif lifted straight from the horror genre, and gratuitous aerobics sequences (showing off the talents of Lucinda Dickey, flush from recent success in Cannon’s Breakin’).

Dickey’s possessed Christie uses supernaturally acquired ball-breaking skills to take vengeance upon the policemen who had (sort-of) killed a Terminator-like ninja, but baulks at harming her hirsute cop boyfriend Billy Secord (Jordan Bennett), especially during their V8 juice-dripping foreplay. And yes, there is even another gratuitous jacuzzi scene in this entirely undisciplined, over-the-top, tone-deaf ’80s hot tub time machine, now disinterred by Eureka! to prove that ninja – ever popping up where you least expect them – can never truly die.

The Ninja Trilogy is released in a new dual-format special edition collection by Eureka! on 18 January.