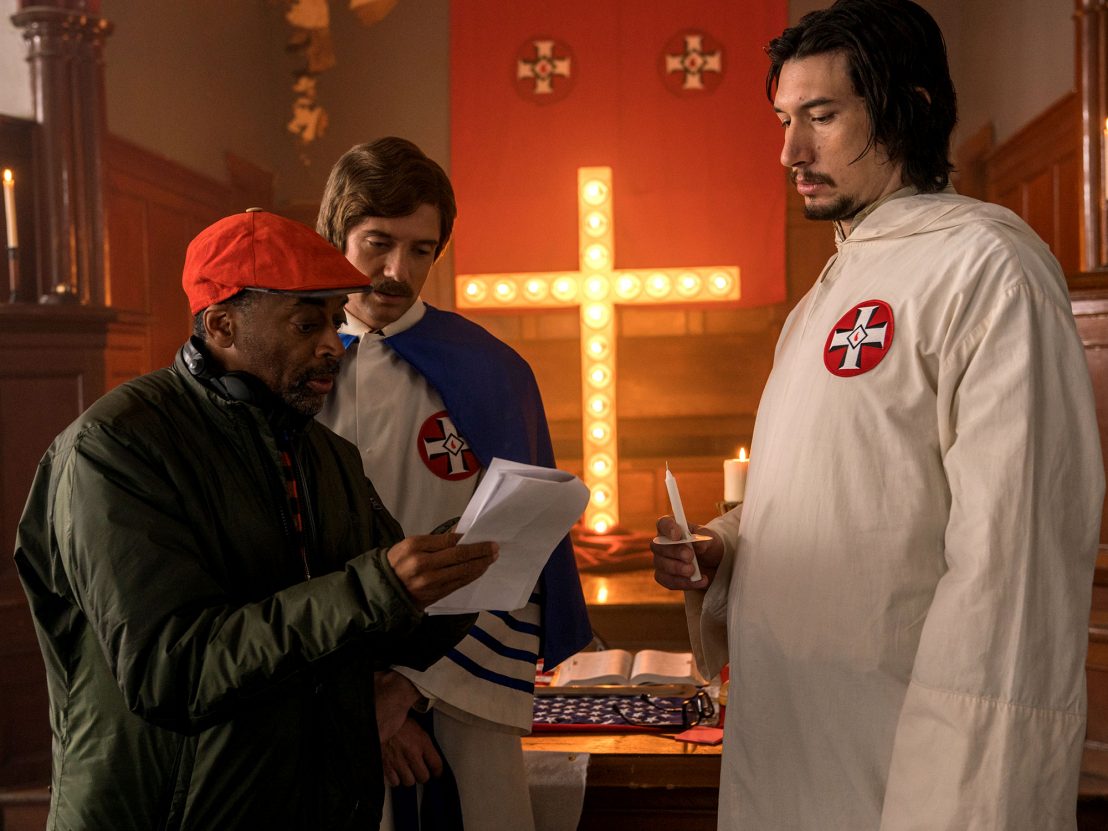 There is no more fluid a phrase in cinema than “based on a true story”. It can be applied to the most faithful adaptation or one where generous creative licence has been taken. I, Tonya nailed the inherent fallacy of faithfully depicting any true story by announcing that it is based on, “irony free, wildly contradictory, totally true interviews with Tonya Harding and Jeff Gillooly”. In BlacKkKlansman, Spike Lee opts for something simpler: “Dis Joint is based on some fo’ real, fo’ real shit”.

Lee’s film tells the story of how Colorado Springs’ first black detective, Ron Stallworth, successfully infiltrated a local chapter of the Ku Klux Klan, in the process holding regular phone calls with the Grand Wizard himself, David Duke. Reading that synopsis, you might fairly assume that the film can’t possibly be based on entirely true event. But you’d be wrong. Almost.

The scene where John David Washington’s Ron makes contact with the Klan happens almost exactly as described in the real-life Stallworth’s memoir. So too does the scarcely believable moment where he asks Duke how he’d know if he was talking to a black man on the phone. More amazingly still, Stallworth was actually asked to guard Duke on his visit to the city – he even managed to get a photo with him. Where filmed fiction starts to deviate from fact is in the gritty details of political affiliations and police procedure, which Boots Riley, director of Sorry to Bother You, questioned recently on Twitter.

Some of the changes make perfect sense: Stallworth’s love interest, Patrice (Laura Harrier), did not exist, but was introduced by Lee to add a layer of complexity to the story and pay tribute to the influence of black female activists. Likewise, the white cop who played Stallworth in person was not Jewish, as Flip Zimmerman (Adam Driver) is in the film, but this too serves to plausibly raise the stakes. These changes believably dramatise the book’s themes and, most importantly, they don’t betray anyone’s intentions or the true meaning of any real-life events.

According to Riley, part of the problem with BlacKkKlansman is that the “false parts of it try to make a cop the protagonist in the fight against racist oppression”. He claims that rather than primarily infiltrating the Klan, Stallworth was actually part of the FBI’s Counter Intelligence Program (Cointelpro), which entered black radical groups, “instigating fighting [and] setting them up to be murdered by the police or others”. Even more damningly, he suggests that white supremacist organisations were only infiltrated as a tool to further destabilise black radical organisations – in essence, the opposite of what Lee’s film depicts politically.

Stallworth’s response? “I pray for my demented and dissolute brother.” Ouch. There’s no evidence that Stallworth was ever a member of the FBI or its Cointelpro programme, though that’s not to say they didn’t do some of the things Riley mentions in his post. He cites articles suggesting one FBI plant in the Klan, Gary Thomas Rowe, personally pulled the trigger to kill Viola Liuzzo, a white mother of three and Friend of SNCC (Student Nonviolent Coordinating Committee) worker. He also supports the theory that Rowe was involved in, or at least knew about, the Birmingham, Alabama Baptist Church bombing, but did nothing to stop it.

Yet while Stallworth and his colleagues weren’t the villains Riley suggests, they weren’t quite the heroes Lee puts on screen either. It’s clear from several passages in his book that Stallworth believed in the civil rights movement and wanted to destroy the Klan, but for whatever reason his undercover investigation became focused on intelligence gathering rather than arresting Klan members. The general attitude of Stallworth and his superiors seemed to be a desire to keep the peace, regardless of whether the person threatening to breach it was a man in a hood preaching hate or someone fighting for equal rights. The book’s vagueness about some of these key questions is one reason to be suspicious of its truth, as is the fact Stallworth’s infamous picture with Duke was conveniently lost. 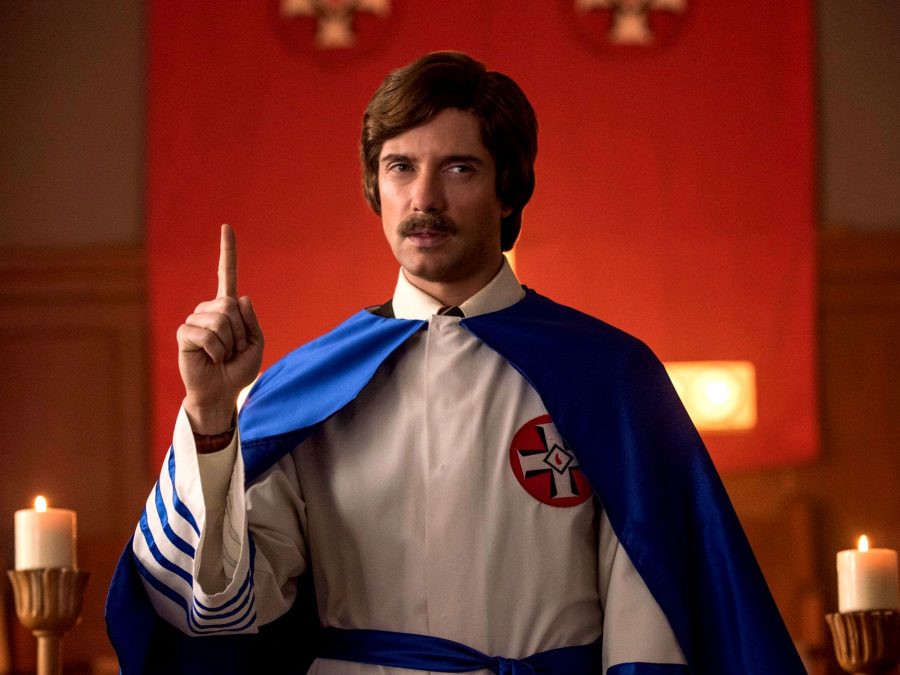 Interestingly, in 1954 the ‘new’ Klan adopted an official policy of non-violence, though as several passages in the book prove, not to mention countless recorded incidents, that rarely held true in practice. Nevertheless, the intense interrogation of Zimmerman’s Jewish roots and the film’s climactic bombing never happened, and the sum total of criminal plots foiled by Stallworth and co amounted to a few cross burnings and the bombing of two Denver gay bars.

So if Lee and screenwriters Charlie Wachtel, David Rabinowitz and Kevin Willmott bend the truth to make the cops more heroic, they also bend it to paint the Klan more overtly as pantomime villains. Don’t get me wrong, the Klan’s atrocities and hatred need no exaggeration in general, but in this specific story, it seems the cold hard truth of their activities wasn’t bombastic enough to match the story of how Stallworth infiltrated their group.

There’s one simple reason why Lee felt the need to bend the truth like this, and he’s sitting in the White House. In an America where neo-Nazis seek victimhood on the streets of Charlottesville, a known white supremacist was briefly the President’s Chief Strategist, and immigrant children are being kept in cages on the border, there has never been an easier or clearer parallel between the tactics and aims of the Klan’s Duke and the current administration.

Describing Duke’s methods in the ’70s, Stallworth wrote: “Publicly he would not talk about hate but about heritage and history. He spawned a new racism for the right-wing masses, one that melded the antipathy to blacks and other minorities to general dissatisfaction with government and fear of an ever-changing complex world.” Sound familiar?

Although Lee’s distortion of this true story nails the uncanny similarities between right-wing movements of the past and present, it also leads to a betrayal. By focusing on the urgent, big picture story of the newly energised far right, he erased the reality of the relationship between many black citizens and police officers in America. As Riley puts it, “we deal with racism not just from physical terror or attitudes of racist people, but in pay scale, housing healthcare, and other material quality of life issues. But to the extent that people of colour deal with actual physical attacks and terrorising due to racism and racist doctrines – we deal with it mostly from the police.”

A film loudly denouncing racism and ridiculing its absurd contradictions is exactly what the West –and particularly America – needs right now. You’ll struggle to find fans of Lee’s work who will complain that he’s bent the truth to make the Klan look even more evil. Not when reality is so much more strange and scary than any fiction. But in pushing the film’s heroes and villains to extreme ends of the scale, Lee manages to capture the spirit of the moment at the expense of getting to the heart of the relationship between people of colour and cops.