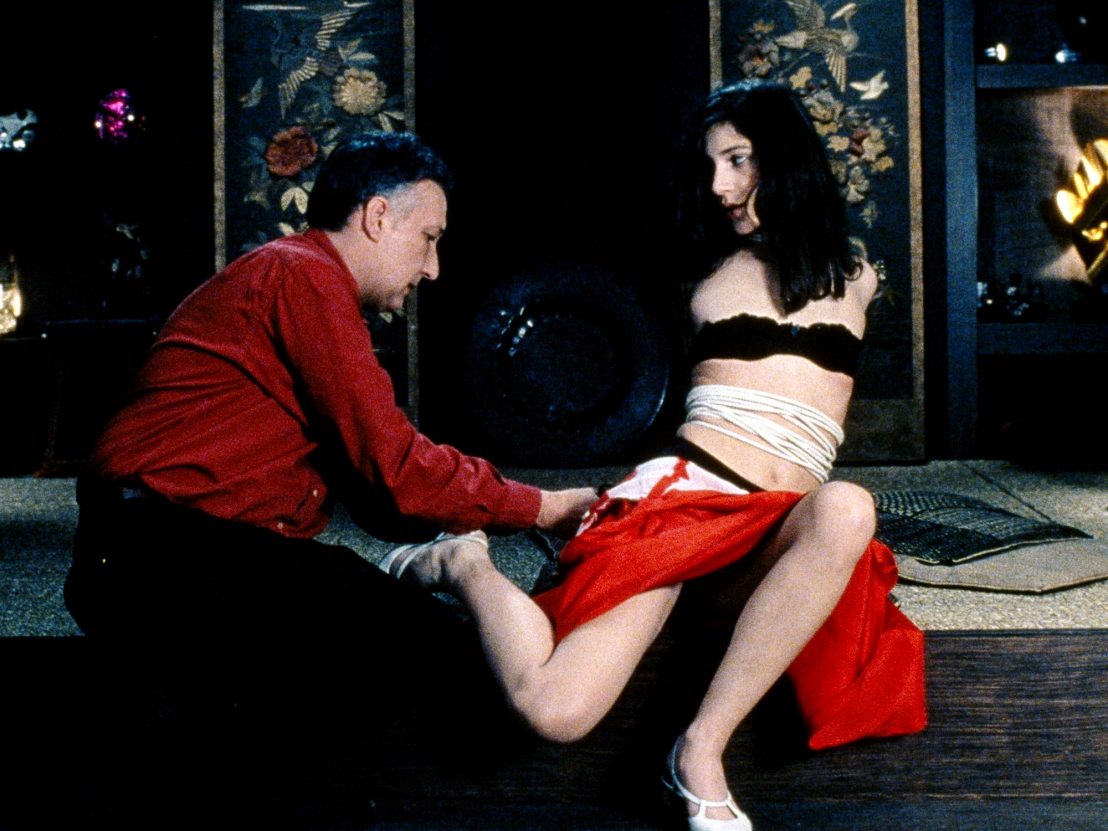 With Romance, not only does she invert the gender dynamics of her own previous feature, 1996’s Perfect Love – in which a man murders his female lover – but she also stretches the very limits of her stated genre, delivering on its characteristic requirements in unexpected and subversive ways.

Romance opens with Paul (Sagamore Stévenin) being made up for a photoshoot in which he is to appear alongside Clara, all under the watchful eye of his girlfriend Marie (Caroline Ducey). Paul is literally a model of masculinity, but as the director of the shoot instructs Clara to look “a bit submissive to the man”, it becomes clear that their heavily gendered roles for this shot are an act, with Clara knowing full well how to play the part of submissive, even to the point of parody, and with Paul, merely disguised as a macho toreador, having to stand on tiptoe to look taller than Clara. Although the director of the shoot – unlike the director of Romance itself – is male, the watching presence of Marie ensures that the gaze in this scene is decidedly female.

Indeed, Marie is the organising centre of Romance, providing its narration, its point of view, even its fantasy sequences. She has been going out with Paul for some time, and is deeply in love with him. But after three months of passion in their relationship, he has effectively called an end to their sex life and lost all interest in intimate contact with Marie, leaving her frustrated and confused. So when she is not engaged in recriminatory conversations with Paul in bed, or teaching French to young pupils, she is off on an erotic odyssey: a series of encounters that test the boundaries of her body, her desire, and her self.

“There’s a hole in your education, yet you’re a teacher,” observes Robert (François Berléand), the headmaster at Marie’s primary school who has just discovered that she is in fact dyslexic and unable to spell the subject she teaches. Holes dominate Romance, whether the heroine’s vagina, licked, prodded and probed by various characters before in the end graphically opening to push out a baby, or the circular motifs on the artworks adorning Robert’s bachelor pad, or more generally Marie’s gaping sense of emptiness, longing for some kind of fulfilment. With Paul refusing to satisfy her desire, she initially turns to bar pickup Paolo, whose very name marks him as the counterpart to the similarly named Paul.

Where Marie loves asexual Paul, Paolo is his sexual double, providing (in a single-take hardcore scene) the physical coupling that Paul fails to give, and thus completing Marie’s image of the “love between men and women” that she asserts is “a devious conflict” and “impossible”. Her idea of the clash between love and sex is also figured by a fantasy in which the top half of her body is with Paul (holding her hand romantically) while the bottom half, protruding from a wall, is used and abused by a parade of lustful men.

Romance concerns Marie’s feelings of alienation within a relationship, and as such it is also an alienating film, vividly presenting intimate moments while somehow always keeping the viewer at a cool distance. It is a difficult film to love – perhaps as difficult as Marie finds it to love Paul – although there is something in its exploration of gender norms, deviant desires and the split between body and mind that remains compelling to the finish.

Unlike a typical romance, it closes not with marriage but with murder, but by the end Marie has found her life’s love for (a different) Paul, and a way to fulfil herself in a male other.

Romance is released on Blu-ray in a brand new scan and restoration by Second Sight Films on 15 July.