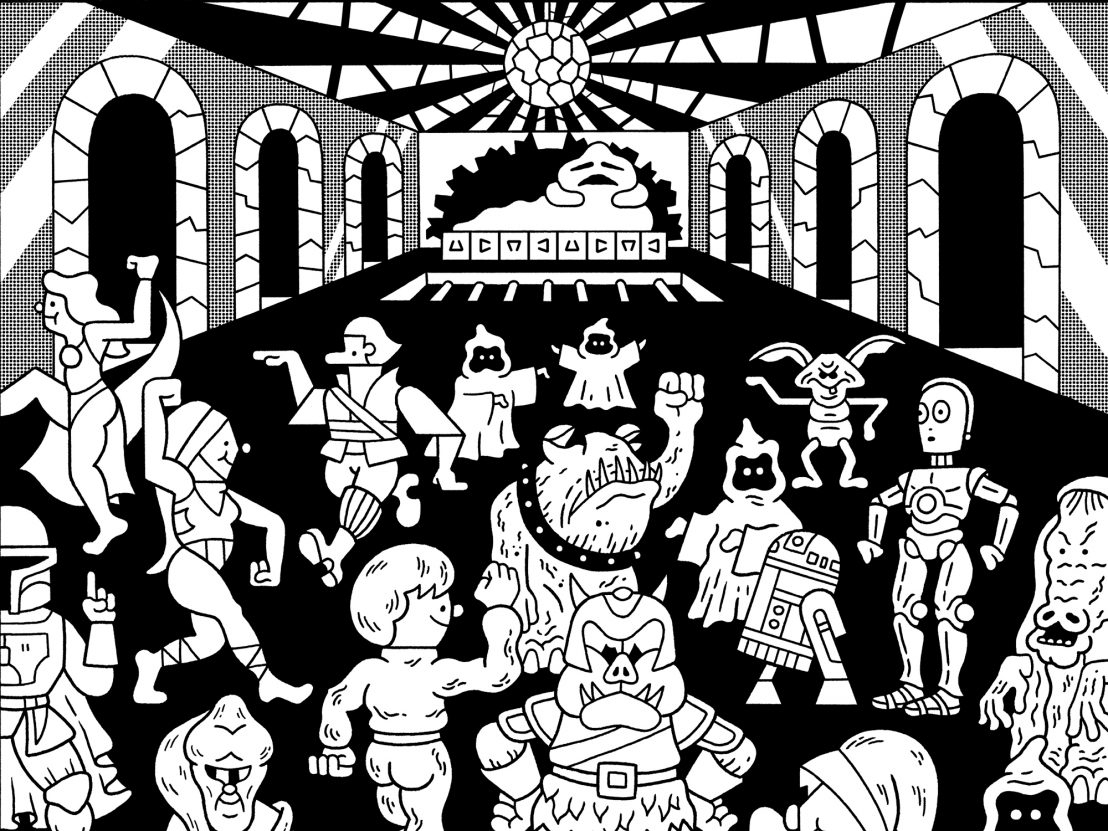 The untold story of the controversial Star Wars floor-filler by the people who wrote it.

In 1983, John Williams and George Lucas dreamed up an intergalactic disco jam to score a key sequence in Return of the Jedi. It takes place in Jabba the Hutt’s throne room – a nefarious den of otherworldly misfits – moments before a disguised Princess Leia shows up to rescue Han Solo. To set the tone, a group of ‘jizz-wailers’ (an official term from the ‘Stars Wars Encyclopedia’) known as the Max Rebo Band perform a song called ‘Lapti Nek’ for Jabba’s amusement. It’s gritty, sleazy and shares a horn blast with Rick James’ funk classic ‘Give It to Me Baby’ – exactly the kind of sound you’d expect a slug-like crime boss to be into.

To help write the song, Williams called on his 22-year-old son Joseph – who would later become the frontman of rock band Toto, best known for ’80s hits ‘Africa’, ‘Hold the Line’ and ‘Rosanna’. “It was basically my father throwing me a bone,” says Williams. “George asked him for two sound cues [‘Lapti Nek’ and ‘Ewok Celebration’] so my dad thought that if I wrote the lyrics in English, then recorded them at Lucasfilm, it would be a fun way to spend time together.”

Little did Williams know, the song would take on a life of its own. Once his lyrics were translated into the fictional language of Huttese by sound engineer Annie Arbogast, several versions of ‘Lapti Nek’ were recorded in the hope of turning it into an unlikely hit. These include a 12-inch club mix and a cover by Meco, the American producer whose disco versions of Star Wars themes sold millions worldwide. Williams even recorded a more contemporary version as Urth to capitalise on the film’s success, teaming up with then-brother-in-law Jay Gruska, who co-wrote ‘Tell Me I’m Not Dreamin’ for Jermaine and Michael Jackson. Commercial success never materialised and, when George Lucas revised the original Star Wars trilogy in 1997, he replaced ‘Lapti Nek’ with a more straightforward R&B number called ‘Jedi Rocks’ by Jerry Hey.

The Max Rebo Band were transformed from a trio of puppets into an ensemble cast using CGI animation. Lucas felt this was closer to the “big musical number” he had originally envisioned for the film, claiming it added atmosphere. Fans disagreed. Of all the objections to the re-releases, turning that scene into an in-your-face, cartoonish interlude may be the sorest grievance.

Ever since, fans have found their own ways to keep the original song alive. There are hundreds of live performances, remixes and tributes online, including a sing-along version (where you follow a bouncing Death Star) as well as an Elvis-style cover by Darth Elvis & The Imperials. The significance of the Max Rebo Band has even been fleshed out in short stories and comics covering the expanded Star Wars universe.

Yet trying to piece together the story of ‘Lapti Nek’ is surprisingly tricky. For all the meticulous scrutiny of the Star Wars canon, there are still plenty of gaps, contradictions and untruths when it comes to Jabba the Hutt’s favourite disco song. Williams has never spoken about it in interviews, mainly because nobody ever asked, but he’s happy to clear things up. “With Toto, we do a VIP experience where 50 fans come in for a soundcheck and ask questions afterwards. Once in a blue moon, someone will ask me about ‘Lapti Nek’ or mention how popular it was in some region you wouldn’t expect. It’s a strange thing, that song.”

‘Lapti Nek’ was intended as an homage to the cantina theme in the first film, where the music had a ’40s feel, so the idea was to jump forward in style – and it was George Lucas who wanted a disco vibe. People may not remember, Williams says, but that cantina theme proved an unexpected success, garnering airplay just in its original form. That’s why there were all kinds of attempts to turn pieces from Return of the Jedi into something radio-worthy.

“Ultimately I think replacing [‘Lapti Nek’] did not help the film,” he says. “I know my father thought the whole idea was charming and, at the time, it worked. It was goofy but it had its place. Evidently when George re-did the visual stuff, he just considered updating the sounds to something else. And since it’s his baby, he’s entitled to do that. “There was always a battle against the fans who never liked the original song,” says Nick Redman, a consultant for Fox Music who has worked on various Star Wars soundtracks. Return of the Jedi initially drew a backlash for appealing to younger audiences, he explains, and the ‘Lapti Nek’ sequence played a part in that.

When Redman began producing a Star Wars soundtrack anthology in 1993, there was enough antipathy surrounding the track that it was relegated to a bonus disc. By 1996, when plans were being made for the Special Edition soundtracks, that criticism felt amplified. “The internet was taking off and that was probably the first time where studios were taking notice of what people were writing online – and taking them far too seriously, in my opinion.” Redman can’t speak for Lucas, he adds, but the filmmaker would have been aware of the song’s unpopularity and perhaps saw an opportunity to change things.

Twenty years on, however, fans are still pushing for ‘Lapti Nek’ to be restored. Now that Disney owns the franchise, Redman can foresee the untouched films being re-released. “When money talks, things happen,” he says. “And I think we’re getting to that point now where the fans’ desire is great enough that we’ll finally see the originals on Blu-ray.”

Many still consider the updated editions “a betrayal”, Redman adds, but while he agrees that a grimy disco song suits a far-off galaxy where everything feels worn out, it could just be a question of favouring what you know.

“If you first saw Return of the Jedi when you were seven or eight, and you loved it, then you’re going to love all of it, warts and all. Whether ‘Lapti Nek’ is a great piece of music or not is irrelevant. It’s part of the landscape. So when someone takes it away, you miss it. The debate whether George Lucas should have made any changes to the first trilogy rages on and will probably continue for the next 20 years.”