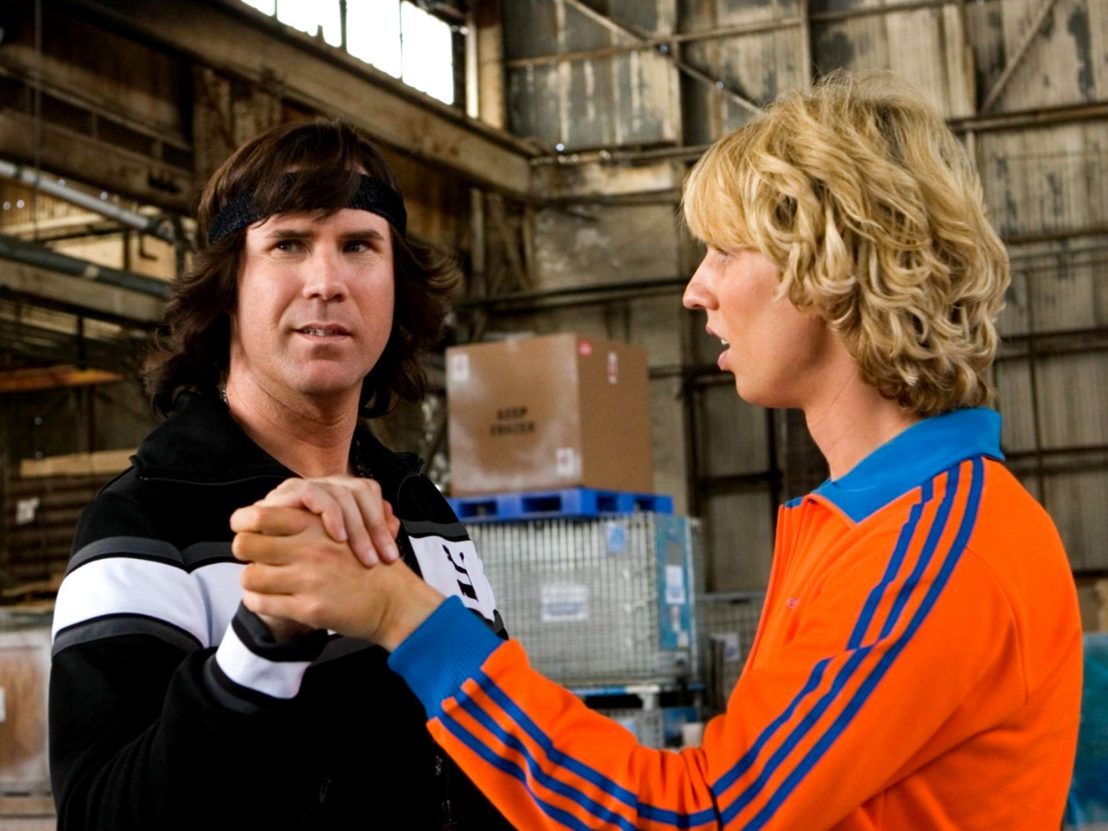 They worked by parodying and subverting clichés of masculinity and genre frameworks; they mocked the inherent self-seriousness at play in sport and action films, but in doing so, they also prodded at their own weakness.

In the case of Hot Rod, which was released 10 years ago this year, the film’s entire narrative centres around Andy Samberg’s Rod helping his stepfather to recover from an illness so he can beat him in a fight, thus finally earning his respect. In contrast to a lot of male-oriented comedy, the humour in Hot Rod comes from gently mocking the main character and the people making it; it looked inward and punched up where other, crueller comedies punch down.

This subversion of masculinity and genre tropes isn’t the only thing tying these films together. Most notably, they are fucking absurd. They pushed the limits of reality and of realistic violence; a head getting cut off with ice skates in Blades of Glory, a brother being cut in half in Walk Hard: The Dewey Cox Story, an extremely extended fall sequence in Hot Rod. Their funniest moments rely on repetition and on extending a joke past the point of exhaustion until it becomes funny again, as in Hot Rod when Will Arnett cries “babe!” at Isla Fisher’s character at least 20 times. For a time these films were absolutely everywhere, but 2007 was the year they all but died off.

These comedies have their origins in the late ’90s and arguably reached their peak in 2004 – the year of Dodgeball, Anchorman, Napoleon Dynamite, and Starsky and Hutch. This pattern pretty much continued year by year, and, as other filmmakers caught on, a number of similar but inferior films were released.

Despite the fact that many of the films listed above were well-received by critics, they often underperformed at the box office. Of them, only Blades of Glory and Dodgeball can really be considered financial successes. These films were outrageous, aggressively dumb, and represented a sizeable risk for the studios who produced them. 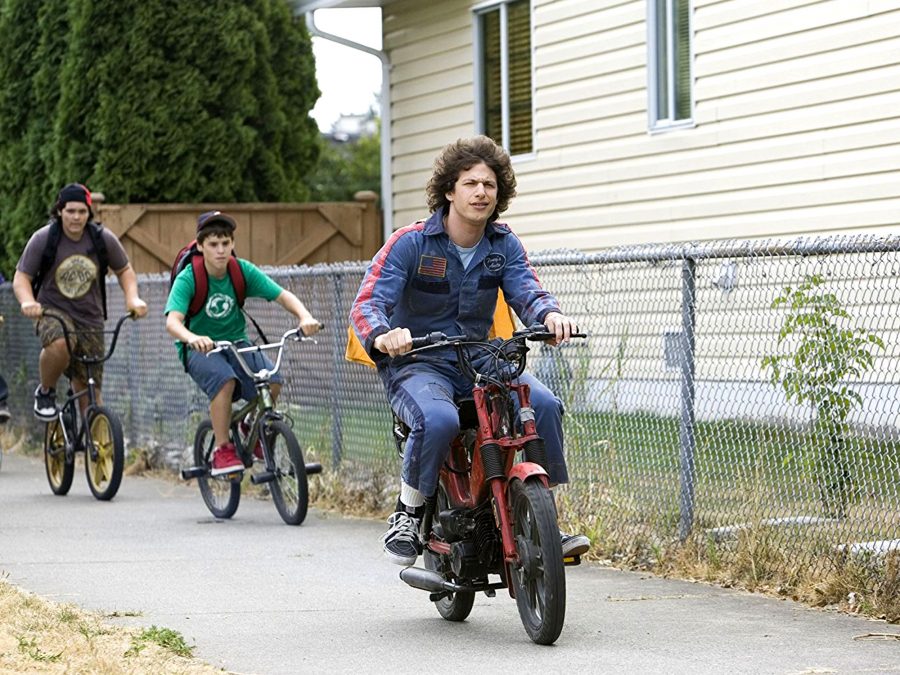 Then, in 2007, something changed. While these wacky pastiches remained somewhat popular among audiences – Blades of Glory, Hot Rod, and Walk Hard: The Dewey Cox Story were all released that year – another type of comedy was starting to fare far better, and more reliably. This was the year of Seth Rogen and Judd Apatow.

Films like Superbad and Knocked Up made more money, appealed to more people, and simply had more perceived depth than the likes of Blades of Glory. Hot Rod was for slackers, but Knocked Up and its ilk, while still appealing to the stoner set, dealt with real adult issues. Despite some absurd, parody-style comedies being released in the years to come, over and over again it was proved that films with Seth Rogen, Jonah Hill or Jason Segel attached would bring in the big bucks.

Perhaps as a result, the so-called frat pack of Will Ferrell, Vince Vaughn and Ben Stiller fell apart. There’s only so long you can act dumb and make fun of other films before it gets stale. Commenting on the Frat Pack’s breakup, The Guardian noted that, “the ever-crucial younger crowd, relied on by studios to come out in force on the increasingly-important opening weekend, have diminishing interest in watching men not far off 50 imitate children.” Which is really key – none of these men are really that funny anymore. When they attempted to retread old jokes in Zoolander 2, the result was disastrous – our own review called it, “a pitiful comedy latched to a past that no-one remembers.” 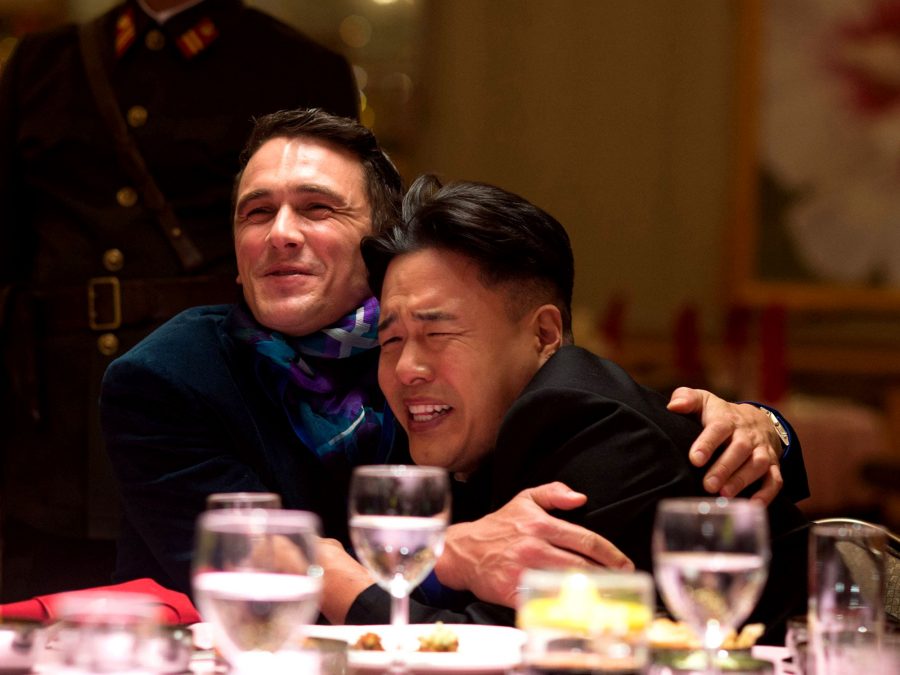 Yet while changes in audience viewing habits are hard to predict, ‘dumb’ comedies haven’t completely disappeared. James Franco and Seth Rogen are still working hard at being as annoying and offensive as possible, with films like The Interview and Sausage Party. But those old bro comedies punched up. For all their flaws, Hot Rod and its spiritual siblings often played on our assumptions and prejudices to make a more progressive commentary, but as a response to a perceived ‘PC culture’ and an increasingly woke audience, comedy now tends to attempt to provoke outrage. None of them are as smart or as gut-wrenchingly funny.

In 2016 the team behind Hot Rod, The Lonely Island, released Popstar: Never Stop Never Stopping, to far less fanfare than their reputation deserved. The critics liked it enough, but the film still lost money in part because its intended audience doesn’t go to the cinema as much as they once did. The film was a parody of both music documentaries and the music industry, with celebrity popstar entitlement its clearest target. It’s sharply observed and totally absurd – in a scene in which Seal is mauled by wolves, the film revels in a silliness that has been missing from mainstream comedy of late. However, its financial failure (it recouped just $9.5m of its $20m budget) suggested that the current climate isn’t suited to this particular brand of comedy.

Reinforcing the fact that we aren’t quite in the right place for surreal, ridiculous comedy, Wet Hot American Summer’s 2015 prequel series, First Day of Camp, was well-received despite not quite replicating the magic of the original 2001 film. Where the movie completely disregarded the fabric of reality and the feelings of its characters, the show tried to bring some depth and realism, even explaining away the film’s absurdities. People had feelings and issues, and the kids were actually characters instead of throwaway jokes who could be killed for a laugh. Maybe we just need our comedy to make sense now.

Perhaps the all-but disappearance of these films is solely down to financial reasons. Or maybe audiences have simply grown up. In 2017, we want our comedy to be meaningful and progressive. Which isn’t a bad thing – it’s not as though we’ve not had enough buddy comedies starring white dudes by now. And yet, there is a part of this writer that will never stop (never stopping) loving dumb, surreal comedy.

There is a certain joy to be found in these films, and it can be argued that, in their own way, they were often quite subversive. As much as we do need progressive, grown up, diverse comedy, every so often it’s fun to switch off from this scary world in which we live and watch someone fall down a hill for a solid minute.