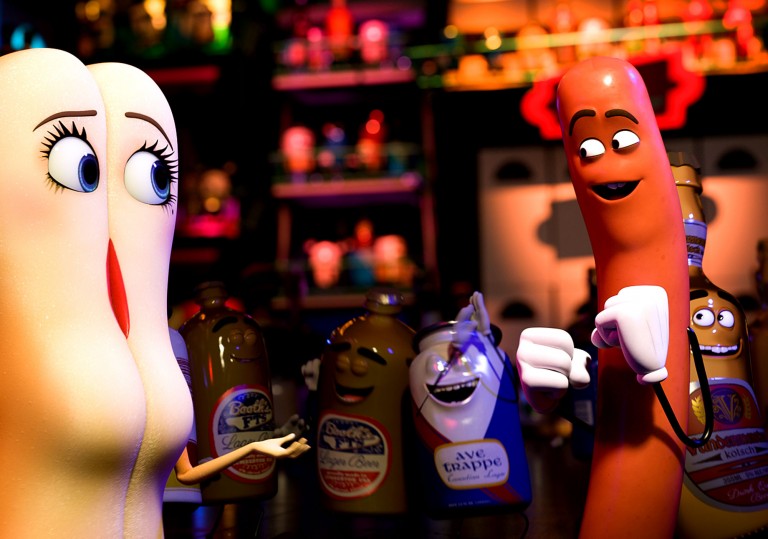 All the best bits are in the trailer.

Re-watch value is extremely low with this one.

Like a plate of hot offal, there’s something undeniably wrong yet strangely appetising about this off-colour culinary comedy from the baked minds of Seth Rogen, Evan Goldberg and Jonah Hill. Billed as the first R-rated computer animated feature, Sausage Party is the kind of out-there concept movie that could only have been cooked up under a purple haze. Accordingly the whole thing has the unmistakable air of a group in-joke – it’s amusing rather than annoying, but you get the sense the material is funniest to those best acquainted with it.

It’s easy to imagine Rogen and co sat around, spliffs and snacks in hand, fleshing out their pitch after tickling each other with the initial premise; easier still to spot the foundational scenes that apparently captured the imagination of super-producer extraordinaire Megan Ellison. But aside from a handful of deliciously crude set pieces, it’s surprising to see the team behind high-grade stoner comedies like Superbad, Pineapple Express and This Is the End operating at relatively low altitude.

Perhaps it stands to reason that a film set in a supermarket featuring cartoon groceries should reach for the lowest hanging fruit. Even so, recurring references to the rise of Nazism, the Israel-Palestine conflict and the genocide of Native Americans feel especially glib in this context. This is a story, evidently inspired by Toy Story 3, about a randy wiener who discovers the horrifying truth about the ‘Great Beyond’, i.e. what happens when food is plucked from the sanctuary of the shelf, and as such there’s really no call for comment – however superficial – on any such historical atrocities.

To be fair, the film more than lives up to its Pixar-gone-politically-incorrect promise, yet for all its purported cultural observation and gleeful prejudice skewering, you watch it thinking, ‘Yeah, and…’ This feeling is compounded by the dialogue, which is so excessively blue it’s as if the writers are desperately trying to hit the required quota of C and F-bombs needed to achieve the desired certificate – that R rating is both a badge of honour and a key selling point.

You can’t help but wonder whether it would have been more effective to tone down some of the broader adult themed humour in favour of a more refined, visually-driven script. The mere sight of an anthropomorphised used condom is far more entertaining than anything that comes out of its mouth; the devastating trauma it has suffered plain for all to see. Sausage Party is silly fun for what it is, then, but if you’re hungry for something smart, salty and genuinely subversive you’d be better off taking another bite of South Park: Bigger, Longer & Uncut or even the first Ted movie.

All the best bits are in the trailer.

Re-watch value is extremely low with this one.