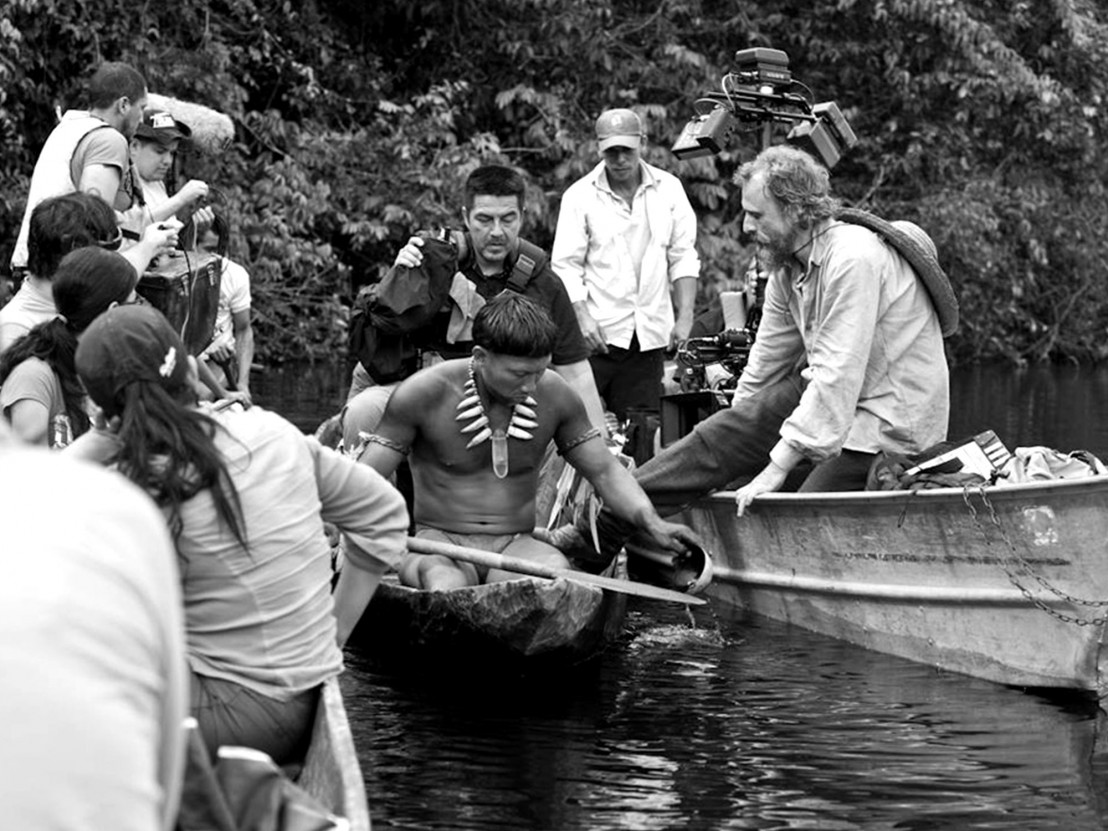 Before he left for the Philippines to begin production on Apocalypse Now, Francis Ford Coppola, concerned about the practicalities of shooting a film in such a demanding environment, sought counsel from his close friend and mentor Roger Corman. “Don’t go,” was his supportive yet sobering advice. Of the many fabled anecdotes associated with Coppola’s masterpiece, this one struck a chord with Colombian writer/director Ciro Guerra as he embarked on the greatest quest of his career so far.

Shot entirely on location in the dark heart of the Amazon rainforest, Embrace of the Serpent is an intoxicating, transformative journey to a time and place virtually untouched by civilisation. Loosely based on the field notes of two scientists who visited the region in the early part of the 20th century, the film tells the story of the indigenous peoples whose sacred connection to the land and river has been slowly eroded by Western interference. It is a unique meditative study of humanity, specifically colonial and ecclesiastical history. Above all, though, it is an extraordinary piece of filmmaking; the result of years of intensive planning and soul-searching. Here, Guerra goes deep on the logistical and spiritual challenges he and his crew faced.

“The Amazon is very special. It’s not a place where you can bring all the luxuries of a foreign production. You really need the guidance of the people who know it, the people who live there. You need their full support. We spent two and half years researching, going back and forth in the Colombian Amazon looking for a place to shoot the film. We found this jungle in the north west Amazon, a jungle that had not been heavily affected by tourism or commerce or agriculture. We started working with the local community, meeting with them, learning from them and asking for their permission to shoot in their home. And asking them to be a part of the film. That was very important, and luckily that was what they also wanted.

Read our LWLies Recommends review of Embrace of the Serpent

“If the environment had been against us, the film would have failed. We couldn’t allow the budget to balloon, for the shoot to go over for even a single day, but the size of the production actually worked in our favour because we weren’t that many people – we were able to fit into the environment in an organic way. The crew was about 40 people, and this did provide certain challenges and obstacles. For example, the scenes we shot on the river were a nightmare because we had a boat with the actors, a boat with the camera, a boat with the sound, a boat with the production design, and finally a production boat. We only had a minute before they started to drift apart so every take was extremely difficult not only to orchestrate but also in terms of having to reset.

“When you make a film like this, it’s all about preparation, accounting for every logistical eventuality. We had to know exactly what shots we needed for each scene, we couldn’t afford any surprises. Still, nothing was easy. It’s the hardest thing I’ve ever done, and I think everyone on the production felt the same way. Looking back, though, the most difficult part was writing the script. Arriving to the script was tremendously difficult. I thought I would nail it right away but it took three years. I got lost in the process many times. But what I love about being a screenwriter is I’m able to react and change things and find a way to allow the film to grow and find its own voice.

“This was also a great spiritual test. It’s difficult to put into words… It was a unique experience. I spent several years learning to see the world from a different perspective and now nothing looks the same. The hardest part is going back to normality, getting used to modern life again. I lost a lot of weight making this movie – not physical weight but spiritual, intellectual weight. After the film was finished I felt lighter. That’s the best way I can describe it. The jungle has its own logic, and you have to be mindful and respectful of that. It’s not just a location. It’s something… more.”

Embrace of the Serpent is in cinemas 10 June.