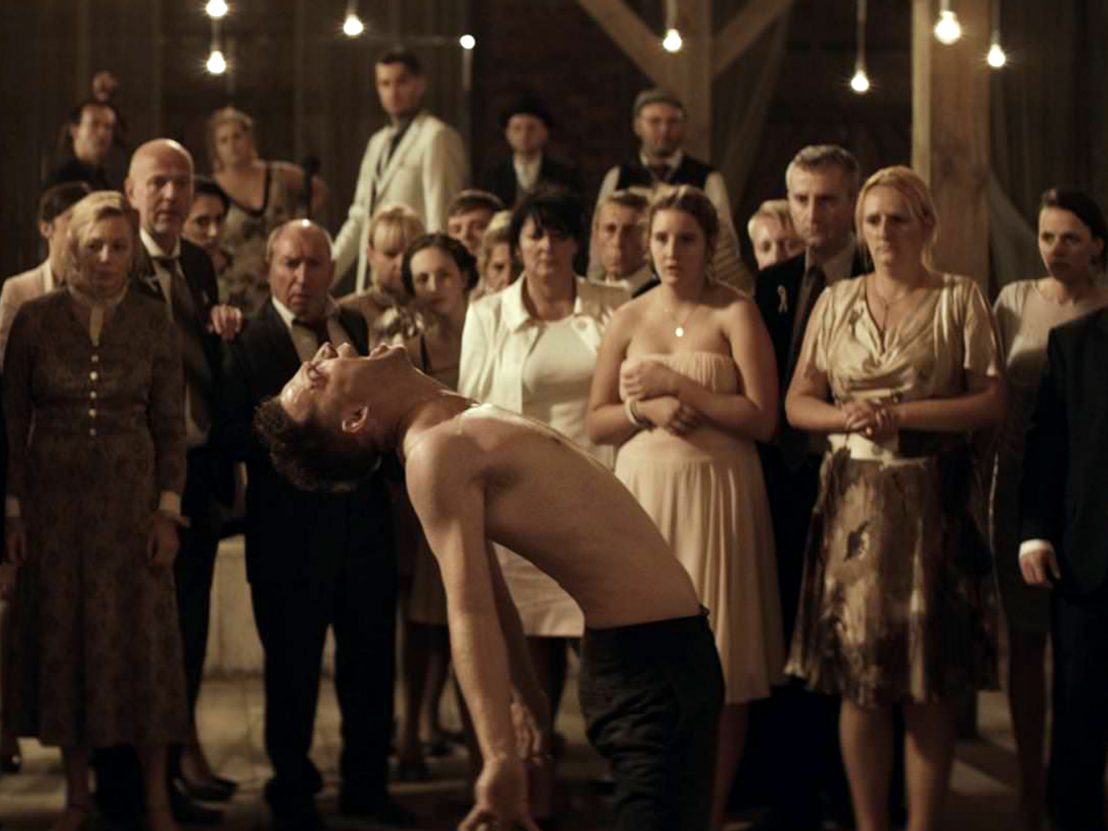 Adapted by director Marcin Wrona and his co-writer Pawel Maslona from Piotr Rowicki’s 2008 play ‘Adherence’, Demon opens with two images: a digger being driven at dawn through streets so utterly deserted that they might as well be in a ghost town; and a man being taken on a small ferry across a river. “Isn’t there a bridge around here?” are his, and the film’s, first words.

The man is Piotr (Itay Tiran), a Londoner returning to his Polish motherland to marry local girl Zaneta (Agnieszka Zulewska) in her hometown. Once off the ferry, Piotr meets Zaneta’s father Zygmond (Andrzej Grabowski) for the first time in person. Zygmond owns a quarry – a massive hole in the ground – which he calls “My Polish El Dorado”, and he has sent one of his diggers to help Piotr prepare the old barn which had once belonged to Zaneta’s late grandfather, and which is where the wedding is due to take place. Piotr in turn offers to design a new bridge when he settles in – the old one, we later learn, having been destroyed by the Germans in World War Two.

Like any bride or groom, Piotr is himself a kind of bridge, fording a connection between a family’s traditions and its future. Piotr hopes to build anew on the old grounds of the barn, using “the original bricks” to create a modern home. But as he attempts, while alone at the site on the eve of the wedding, to dig a swimming pool in the grass, he uncovers a human skeleton, exhuming a secret part of his new family’s history.

Digging and bridge-building are key motifs in Demon, with its (failed) reconciliations to a buried past. Much as the local doctor (Adam Woronowicz) keeps insisting that he is teetotal even as he furtively gets drunk from a hidden flask, Zanuta’s family, indeed the whole community, is in a sort of collective denial. And when Piotr becomes possessed by the spirit of the Jewish girl Hana who had mysteriously vanished from the area decades earlier, Zygmond and his son Jasny (Tomasz Schuchardt) prefer, as always, to conceal from public view this uncomfortable recursion of the past and to lock Piotr (now speaking Yiddish in a high-pitched voice) away in the cellar, rather than to dig further and to expose the awful truth.

“The whole country’s built on corpses,” Zygmond will later protest, as he tries to stop Zaneta doing her own digging, and with these words he reveals the film’s status as national allegory. For here Wrona is unfolding not just a murder mystery, but also a parable of the Holocaust, as the microcosm of a Polish township proves unwilling to face up to both its own complicity in and profit from the historic extermination of its Jewish populace. “Perhaps it’s a good thing that it’s raining,” says the old Jewish teacher Szymon Wentz (Wlodzimierz Press) in his wedding speech – that everyone ignores – on the importance of cultural and historical memory to the maintenance of humanity, “because it reminds us of the tears of despair, of which there were many more than tears of joy.”

Demon is not just set in a lot of rain and mud, but is slippery in other ways. Its very title, and its themes of possession and exorcism, might suggest the horror genre, but the ghostly presence of Hana (Maria Debska) – her black hair in stark contrast with the sea of blonde around her – is meek, confused and lost, and threatening only in what her hushed-up death suggests about the foundations of Zaneta’s family fortune. In the meantime, the supernatural material is confined (both metaphorically and literally) to the background, while most of the film plays out like a carnivalesque, Kusturician comedy of manners, as we observe the wedding party gradually descending into drunken chaos.

Demon comes with a hole – again both literal and metaphorical – at its centre. For the narrative here is riddled with ellipses, as it dances around a disappearance (or two) without ever fully stating – although certainly hinting at – what lies beneath the structure of its repeating histories. This is a portrait of Poland as a not-so-sweet little village, unable to move on from small-town xenophobia against Jews like Hana or modern outsiders like Piotr, even as its unresolved past returns, like a dybbuk, to reinhabit the present – only to be buried, rather than redressed, once more.

“We are sad, because Python has died,” says Jasny of the coming wedding, using the old nickname of his playmate and soon-to-be brother-in-law, “and in his place has been born Piotr.” From its opening, when, en route on the ferry (a vessel freighted with Stygian associations) to get married, Piotr sees a woman, possessed with grief, wading manically in the water, Demon constantly plays upon the complementarity, even the parallelism, between wedding and funeral – the one a commitment to the future, the other to the past.

The celebratory mood of the marriage is constantly disrupted by death – whether Piotr’s inauspicious discovery of the skeleton, or the teacher Szymon’s speech, or Hana’s return from the grave. There is even an actual funeral, glimpsed every so often, taking place concurrently with the wedding. Sadly, this persistent fixation on loss and mortality was also to pervade the film’s immediate afterlife. For on 19 September, 2015, while attending the Gdynia Polish Film Festival where Demon screened in competition, Wrona hanged himself, aged 42, leaving behind his own new bride (and the film’s executive producer) Olga Szymanska. Perhaps the only consolation for such a tragedy is this haunting buried treasure.

The DVD of Demon is released by Sharp Teeth Films on 28 May.