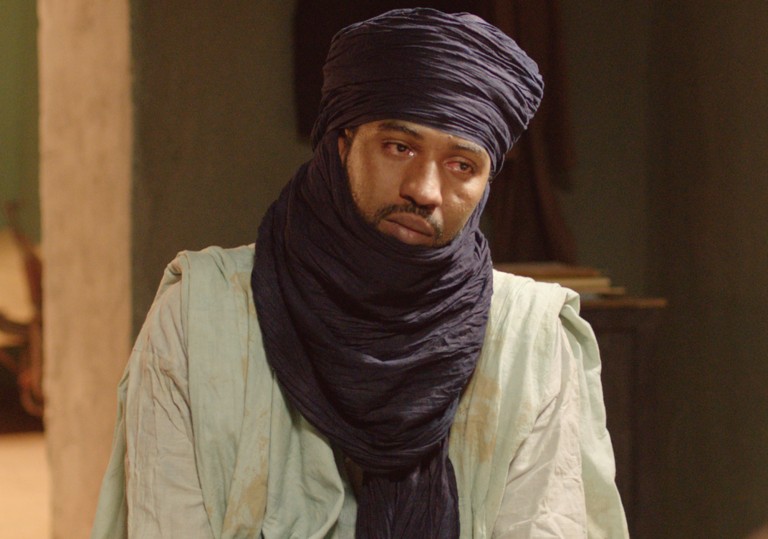 Abderrahmane Sissako is fast becoming the most important voice of contemporary African cinema.

A terse but poetic humanist masterpiece that’s riveting from its first frames.

A film that’s guaranteed to resonate for years to come.

Timbuktu is not an especially manipulative film, but it strives to complicate and confuse the primal emotions provoked by its knowing imagery. Director Abderrahmane Sissako begins with acts of bullying savagery: armed members of Ansar Dine, crammed into a pick-up truck that’s flying the ISIS flag, chase down a helpless impala as it skitters across the desert flats. Next, they fire a hail of bullets at a row of priceless Malian artifacts, obliterating fragile wooden figures that they could probably have broken with their bare hands. When the armed men trot out a blindfolded hostage, the film seems tilted towards becoming an illustrated laundry list of extremist barbarism, but Sissako suddenly muddies the water.

Rather than execute their captive, the jihadists begin to take careful record of his prescription medication – their reasons for wanting to keep the man healthy may be more sinister than we ever have the chance to learn, but regardless of their intentions, it’s deeply unsettling to hear the most iconic murderers of the 21st century discussing how to keep someone alive. As the casual conversation turns towards the differences between brand and generic drugs, this fleeting beat finds its place in Sissako’s rhythm: Timbuktu is a mosaic of moments that, alone and collectively, work to expose the irreducible pearl of humanity that makes it impossible for ideology to take a complete and perfect hold over its host.

Still, it would be ludicrous to suggest that the film attempts to absolve these fundamentalists. On the contrary, Sissako exposes the soft tissue beneath their armour, their crimes made all the more tragic by how delicately he’s able to lift the veil. As with 2002’s Waiting for Happiness and 2006’s Bamako before it, Sissako’s latest trains its eye on a place in time and organically allows several narratives to emerge, some of which metastasise into violence. Appropriately, Sissako has Ansar Dine wend their way into the city like a malignant cancer. They force a passing man to roll up his pants (he can’t, so he takes them off instead). They demand that a woman in a hijab wear gloves when she sells fish in the public square (she tells them how difficult that would make it to do her job, but the complaint falls on deaf ears).

Abdelkerim (Abel Jafri), Ansar Dine’s local leader, strolls into a mosque with a sense of divine purpose, armed to the teeth. When the imam questions his actions, the insurgent answers that he and his men are “Doing jihad,” his response as casual as someone sharing their plans for the afternoon.

Meanwhile, on the dunes outside of town, a Tamasheq nomad named Kidane (Ibrahim Ahmed) sings forbidden music for his wife (Toulou Kiki), their daughter, and the orphaned boy they’ve adopted into their family. Kidane’s home is as open to strangers as it is to the skies above, the anachronistic tribalism of his living conditions just one of the many details that locates Timbuktu at a crossroads between old traditions and modern influences. The jihadists drive American pick-up trucks and discuss the most recent – presumably televised – acrobatics of Argentinian football star Lionel Messi. Everyone (even Kidane) owns a mobile phone. Endearingly, the wayward cow whose murder triggers the film’s central tragedy is named “GPS.”

Sissako’s Timbuktu is a place that’s being drawn and quartered. The modern world has clearly arrived, and yet Ansar Dine’s violent regime is hell-bent on reversing the flow of time, their occupation determined to topple Timbuktu like an hourglass that’s been turned upside down. Their campaign exerts a grim gravitational pull on everyone within its reach – the sequence of events by which Kidane ultimately finds himself at the mercy of a jihadist tribunal is hardly irrelevant, but Sissako’s elegant plotting is nevertheless eclipsed by the inevitability of his protagonist’s fate.

Naturally, the film’s sole untouchable character is the only one who can stride between worlds. Zabou (Kettly Noel) is the local fool, the crazy woman who speaks truth to power and reflects the madness around her. As Sissako’s narrative blossoms, Zabou’s presence can be felt stretching across the city and eventually canvassing all of Timbuktu like the place is covered by a giant circus tent. Daily life assumes the feel of a grotesque carnival performance – the film’s most indelible scene finds a group of boys flouting Ansar Dine’s ban on football with a pantomimed game, their vividly imagined match confounding the vividly imagined doctrine that covers their world with its shadow.

Timbuktu thrives in these strange limbos between defiance and resignation. Sissako repeatedly frustrates the rigidity of ideology with the fluidity of humanism, and even the film’s most tragic turns have a way of defying the demands of those orchestrating them. Communication is often as fraught between people as it is between the ideas that define them, the various languages spoken by the film’s characters (English, French, Arabic and Tamasheq) turning the eventual conversations between Kidane and Abdelkerim into a most perverse game of telephone.

The clarity of Amine Bouhafa’s elegiac score only serves to underscore that confusion, its resigned and plaintive beauty pushing things ever forward to the narrative’s tragic conclusion. And though Timbuktu resolves in the only way it could, the end of this story does not, of course, spell the end of its namesake. After all, there’s a good reason why the film takes place in 2012: if it were set in 2015, the presence of Ansar Dine would be a glaring anachronism.

Abderrahmane Sissako is fast becoming the most important voice of contemporary African cinema.

A terse but poetic humanist masterpiece that’s riveting from its first frames.

A film that’s guaranteed to resonate for years to come.