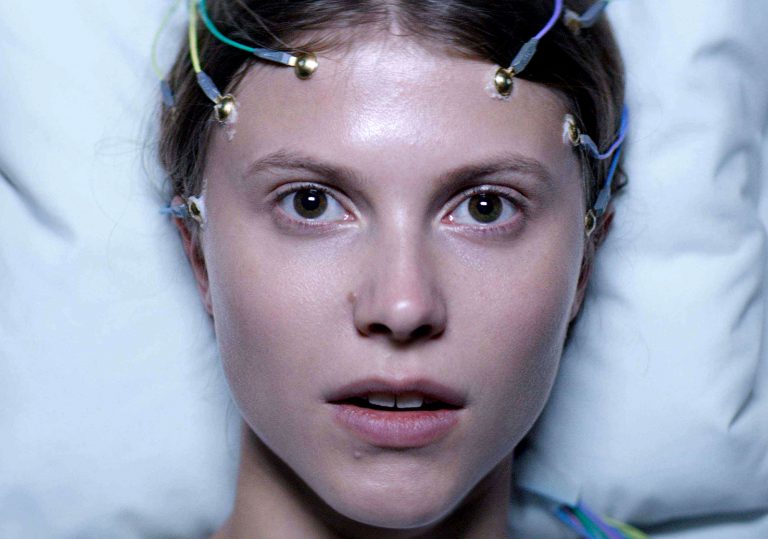 Joachim Trier’s first two features give him a lifetime pass to our interest.

Intriguing and well-made, but also but trying and inhuman.

Way too cool for school.

There is an energy that powers the first two features by director Joachim Trier, 2006’s Reprise and 2011’s Oslo, August 31st. By comparison his fourth feature, a return to Norwegian-language filmmaking after 2015’s American experiment Louder Than Bombs, may appear as bafflingly sedate. Thelma unfolds in the cold, slow force field of its cold, slow antiheroine. As, like the frozen lake located beside her family home, something disturbing lies beneath the surface of this film. Trier relies on this intriguing absence to sustain attention over the best part of two hours.

To bludgeon our senses into knowing that all is not well with first year university student Thelma (Eili Harboe), Ola Fløttum’s electronic score drones across most sequences. Something is also amiss in the family dynamic. Father Trond (Henrik Rafaelsen) is peculiarly over-involved (he knows when Thelma makes a new friend on Facebook) while mother Unni (Ellen Dorrit Petersen) is embalmed beneath a sorrowful glaze.

The first indication that something is wrong comes when Thelma has a seizure in a university study room – an event portended by a bird flying into a window and a “hi” from beautiful fellow student, Anja (Kaya Wilkins). As she falls to the floor, a wet patch spreads out on Thelma’s jean-clad groin. By the next scene her whole body is wet as she swims in a cavernous swimming pool. Anja joins her in this lonely space and kneels down on the pool edge to check on Thelma’s wellbeing. The pair share loaded eye contact.

Aided by occasional flashbacks to Thelma’s girlhood, the narrative unfolds not so much by parcelling out chunks of information but in tiny slivers. Harboe delivers a deliberately blank performance. As with Ryan Gosling in Drive, when asked a question she gazes before responding. It’s hard to get stuck into a character given so little colour beyond a mystery affliction. In the absence of personality, the camera drinks in her athletic prettiness through close-ups and scenes where she, a loner, is the only moving element in the frame.

Only the introduction of Anja means she is less alone. The flip side is Anja’s nearness incites sexual longing and this longing incites more seizures – psychogenic non-epileptic seizures as they are later diagnosed. Fantastical sequences indicate her mental abandonment: veins beneath the skin are lit up by electrical currents, glass shatters, a snake glides around a neck as a hand slides into underwear. The visuals are compelling but something is missing. The tone is too flat and the world-building too smooth for this film to ever come fully to life.

Where it’s going is fascinating enough yet without an undercurrent of the human life caught in this horror, Thelma feels too stark an exercise. One is left with its ideas on a theoretical level rather than a gut-wrenching one. The reveals open up a philosophical goldmine, but these shining offerings end up scattered on the surface. Trier’s first two films proved him a genius at rendering the heat of emotional intensity. One wonders why he has turned so cold.

Joachim Trier’s first two features give him a lifetime pass to our interest.

Intriguing and well-made, but also but trying and inhuman.

Way too cool for school.