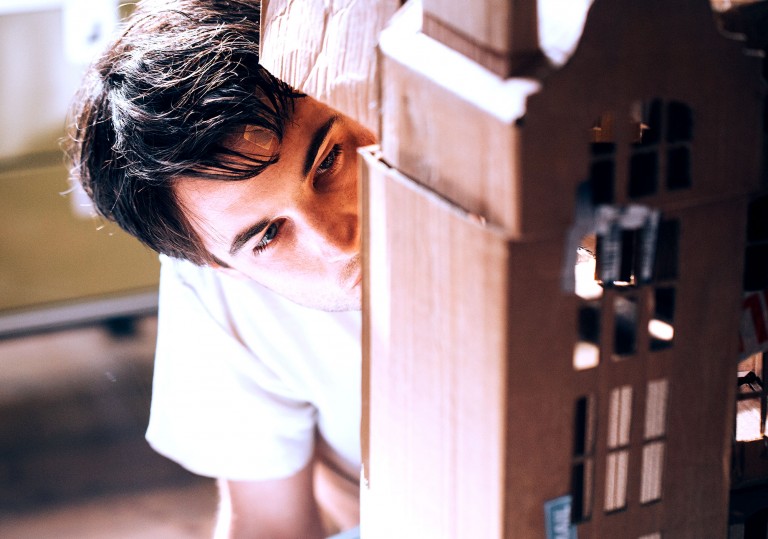 An ambitious project for a first-time director.

A head-spinning and often exhilarating mystery.

This one lingers in the memory.

Essentially, you’ve got to forget it ever happened,” the solicitor tells his client. “Put it behind you and start a new life, on your terms, with incredible resources.” That’s easier said than done. Tom (Tom Sturridge) has just received an £8.5 million payout as compensation for being severely injured in a freak accident – but how can a man move forward with his life when both his body and mind still bear such fresh scars?

As he hobbles around his small flat, fragments of memories keep flashing into Tom’s ruptured brain, giving him a reason to exploit his sudden and unexpected wealth. He finds a location that matches the home in his mind’s eye and hires actors to play roles within it, hoping that some kind of Proustian spark – the smell of liver? The sound of a piano? – will reconnect him with his former self.

We are watching a man literally constructing his memories, and while Remainder superficially resembles Charlie Kaufman’s Synecdoche, New York, the film is actually an adaptation of Tom McCarthy’s acclaimed 2005 novel, brought to the screen by visual artist Omer Fast. His gallery work has always explored the boundaries between memory, reconstruction and reality, and so it makes sense that he would feel a kinship with McCarthy’s book. At times, Fast’s inexperience as a feature director shows, notably in the slightly generic performances offered by some of the supporting cast. Yet he directs with a refreshing confidence, finding the sweet spot between disorienting or confounding the viewer and keeping us hooked.

Fast offers an interesting perspective on London too. As the rich and feckless character moving to Brixton and modifying the area according to his own whims, Tom is a symbolic representation of the forces of gentrification currently plaguing the city. It’s no coincidence that as Tom and his crew move into their new home, we see a young black family being forced to move out. Combined with his frequently obtuse, prickly and controlling behaviour, this makes Tom a difficult protagonist to get behind. Sturridge, however, has a wounded, naive quality that succeeds in making him a more sympathetic figure than he might have been in other hands.

Crucially, Fast also seems well aware of the inherent absurdity of the premise, and he embraces that aspect of it. The escalating tension of the narrative dovetails nicely with a welcome streak of dry humour. Arsher Ali’s deliciously deadpan turn as Tom’s ‘fixer’, unflappably meeting all of these increasingly ridiculous demands, is perfectly pitched, while Tom’s direction to the masked actors playing his vague memories (“There’s a small cupboard with a broom. I don’t want you to use it ever, but you have to think about it”) present him as a sharp parody of perfectionist film directors. In fact, while it succeeds impressively as an exciting and stimulating thriller, Remainder resonates more as a contemplation of the artistic process itself; the obsessive desire to recreate a specific vision, and the danger of becoming consumed by it.

An ambitious project for a first-time director.

A head-spinning and often exhilarating mystery.

This one lingers in the memory.