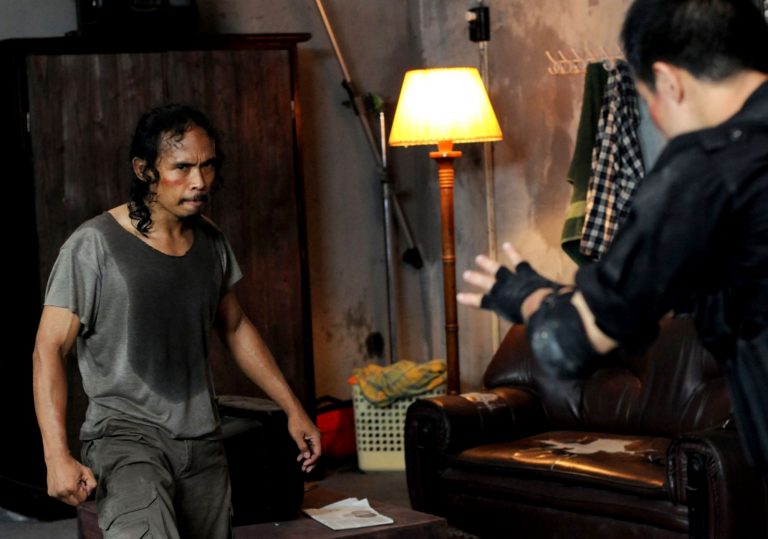 Kung-fu flicks are 10 a penny, but a faint buzz of confidence suggests The Raid is worth a second look.

Pound for pound, the most exciting action movie – and one of the best cinematic spectacles – of the last decade.

Guaranteed to be a word-of-mouth hit. Expect to be introducing people to The Raid for years to come.

It may be Iko Uwais taking a beating up there on screen, but there’s only one person really getting their ass kicked in The Raid: you. Gareth Evans’ deliriously violent Indonesian action flick will leave you bruised and breathless, feeling every splintered bone and snapped neck as if it was your own.

Tick-tock. It begins with a close-up of a watch and a gun, immediately establishing Evans’ preoccupation with speed and violence. The plot is lightly sketched – a rookie SWAT team is dispatched to take down a 15-storey tenement housing the worst of the city’s criminal underworld. At the top, presiding over this shadow state, sits Tama (Ray Sahetapy), a previously untouchable mob boss now being targeted by questionable elements within the city’s police force.

But this raid will not go to plan. Stranded in hostile territory, outnumbered, outgunned and scared out of their minds, the SWAT team faces annihilation. Step forward Rama (Uwais), a cherub-faced wrecking-ball prepared to do whatever it takes to get back home to his pregnant wife. And yet, befitting this film in which the rules of the game are hinted at but never fully understood, a parallel story unfolds.

Because The Raid is not just an assassination attempt; it’s a rescue mission. “I’ll get him back,” says Rama to an old man as he leaves his house. By the end of the film you’ll be left to judge for yourself: who has been saved? And, more to the point, who has been played?

These, of course, are background considerations, as is The Raid’s sly commentary on Tama’s criminal enterprise. From his perspective, this is nothing more than an epic arm wrestle for control of a lucrative business – a murderously hostile corporate takeover in which revenue streams run with blood.

But it’s the foreground that counts as Evans and Uwais introduce the western world to silat, Indonesia’s native martial art, the kind of fluid fighting system that makes Tony Jaa’s Muay Thai look like a drunken post-pub rumble. Together, Evans and Uwais (alongside Yayan Ruhian, who plays Tama’s arch enforcer, known only as ‘Mad Dog’) have choreographed some of the most jaw-dropping fight scenes ever committed to film.

There are moments in The Raid – a throat impaled on a jagged doorframe, a point-blank execution, a lightning-fast knife slicing a hamstring – that elicit a physical response. This is cinema at its most visceral – a gasping, grinding, happy-slapping sucker punch delivered by a new star in the making.

Boyishly handsome with the sort of deceptive stillness that hints at hair-trigger violence, Iko Uwais has a natural screen presence. He’s both hunter and hunted in the blood-splattered corridors of the apartment block where wave after wave of faceless henchmen are dispatched with fists, feet, elbows, knives, sticks and, in one of many wince-inducing whoop-‘n’-holler moments, an overhead light fitting.

A potent cocktail of Tony Jaa, Jackie Chan and some sort of adamantium-enhanced X-Man, Uwais throws himself (literally) feet-first into the action, breaking every Health & Safety statute in the book in a quest to become the ultimate screen fighter. But there are grace notes and subtlety, too, hidden in the eye of this human whirlwind.

He’s nimbly supported by Evans’ direction. Brought up on a diet of kung-fu films in South Wales, he’s not the obvious choice to kick-start the Indonesian film industry, but that’s exactly what Evans has done.

True, you can see some of the stitching in certain cuts, but that’s only because Evans isn’t trying to hide. Eschewing quick edits for brilliant lucidity, he leaves you to savour every killing blow, every death spasm. Backed by some bone-jarring foley work and smartly integrated special effects, the result is a thrillingly kinetic but superbly grounded piece of cinema that winningly defies current blink-and-you’ll-miss-it action conventions.

But don’t be fooled into thinking he’s just a point-and-shoot merchant. The Raid may not be overburdened with narrative, but Evans proves himself an adept visual storyteller with an intuitive grasp of pace and rhythm. The action scenes are built on an expertly crafted set-up, orchestrated by Evans with the same deftness of touch that sees Tama manoeuvre the SWAT team into his web.

He’s cited the likes of Panna Rittikrai and Sam Peckinpah as early influences, but there’s more than a passing hint of the two Johns, Carpenter and McTiernan, not to mention shitstorm stablemate [REC]. And yet, like Assault on Precinct 13, The Raid is often a tenser proposition when its adversaries are off screen, heard but unseen, shapes in the darkness waiting to strike.

It’s not just ’80s action, though. There’s an unmistakeable video game vibe about the respawning enemies, the weapon pick-ups, the boss battles and especially the level-up structure that sees Rama ascending towards a final showdown. It may be tinged with retro stylings, but this is a thoroughly modern action movie.

Destined for late-night cult status, The Raid is an irresistible adrenalin shot delivered straight to the nervous system. It may not be one for film Catholics, for those who see cinema as a silent communion with the gods. But for anyone who yearns for the participatory thrill of the movies, Evans has created an unmissable event, one made for sharing in the most raucous atmosphere imaginable.

Sure, The Raid may find itself ambushed by the occasional cliché, but there’s nothing that can stand in the way of this cinematic smash-and-grab.

Kung-fu flicks are 10 a penny, but a faint buzz of confidence suggests The Raid is worth a second look.

Pound for pound, the most exciting action movie – and one of the best cinematic spectacles – of the last decade.

Guaranteed to be a word-of-mouth hit. Expect to be introducing people to The Raid for years to come. 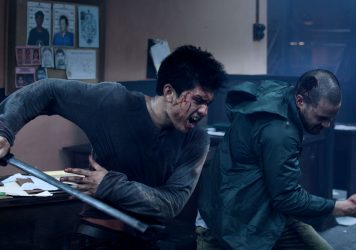 Eye-watering violence is the dish of the day in this stylish though ultra-formulaic martial arts runaround.