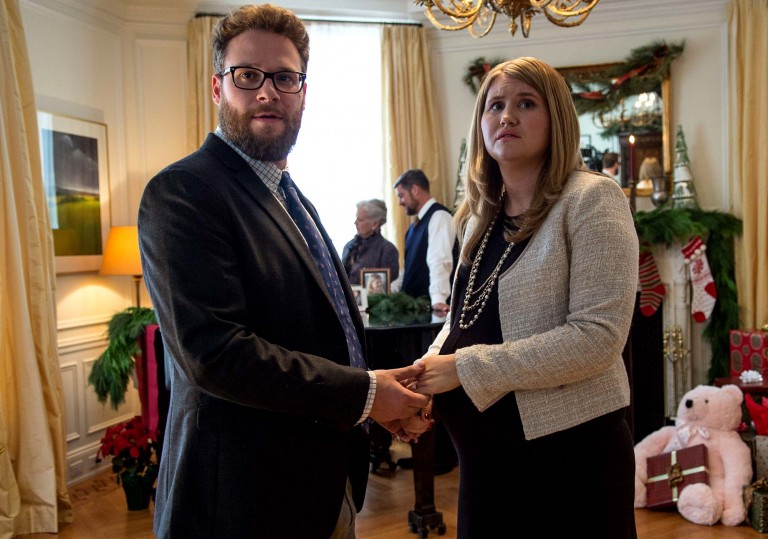 Three kings of comedy come together for Xmas.

But deliver a gift of tedium rather than comedy gold.

When the stoner movie pulled a cracker with the Christmas movie, things went typically, tragically awry. Three chest-bumping dudebros – played by Seth Rogen, Joseph Gordon-Levitt and Anthony Mackie – fulfil an annual tradition of getting blotto’d on Christmas Eve. They do so as a way to preserve the innocence of their youth and their status as a racially and religiously diverse family unit.

Where real life has caught up with Rogen’s lawyer and parent-to be, Isaac, and Mackie’s social media savvy footballer star, Chris, it has yet to sink its claws into Gordon-Levitt’s sad-sack, Ethan. There’s a reason for this, as this custom was born out of the fact that Ethan’s parents were killed during the holiday season, and Isaac and Chris stepped in to console this decrepit soul.

From this short description, you’d have to have been brought up in a capsule on the Moon and partitioned from all popular fiction created throughout the history of mankind to not know how this one plays out. Their valedictory Yuletide blow-out turns into a night of introspection, and the rickety foundations of their union is bolstered for years to come through plucky adventure, seasonal cheer and comedy jumpers. The Mount Doom of this lagered-up quest movie is a mysterious invite-only party known as the Nutcracker Ball which has, over the years, gained a certain clandestine notoriety. Ethan scores some tickets, and this night before adulthood finally has its purpose.

Where the film falls down is on a nuts-and-bolts level, in that it is just never that funny. Plus, no amount of faux camaraderie and invented nostalgia can be thrown at the screen to make the viewer believe that these three guys are and always have been best buds. While the three leads are seriously lacking in the LOL department, thank the Lord for Michael Shannon, playing it straight as a burn-out drug dealer and making you wish that the movie was about his character. With sundry sacrilege, dick pix and manic behaviour fuelled by a cocktail of drugs bought from CraigsList, The Night Before – like a comedy Bubble and Squeak – is lots of stodgy leftovers mulched up so as not to let it go to waste.

Three kings of comedy come together for Xmas.

But deliver a gift of tedium rather than comedy gold.