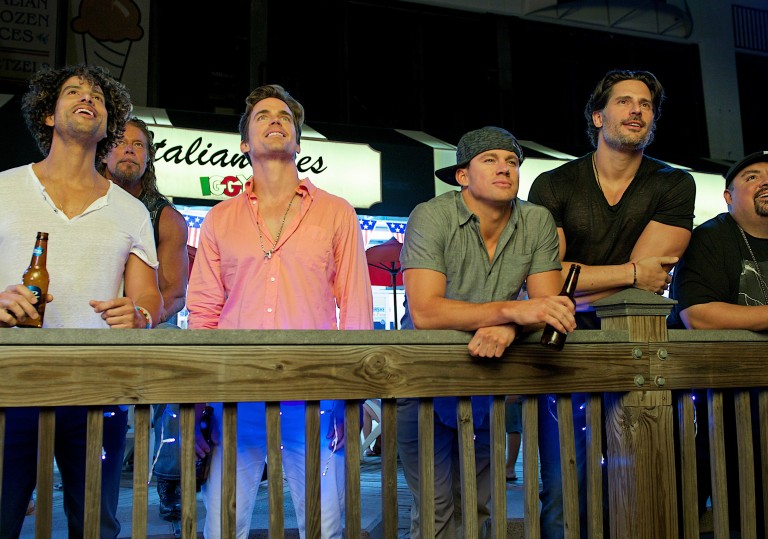 That trailer got us all hot and giggly.

Sexual fantasy with a pumped-up heart and a sublime sense of the ridiculous.

*Cues up Channing Tatum dance-teasing us on a loop forever*

“This was fun, I guess, whatever this was.” Channing Tatum is talking about catching up with old flame, Rome (Jada Pinkett Smith), in her lavish mansion-club of male strippers ruled by heart-flutteringly well-developed black men. Whatever the film was, its sexiness lingers like a post-coital afterglow. Its depiction of Adonises is ridiculous, it’s knowing but most of all it is hot. Magic Mike XXL is a gold thong-sporting, whipped cream-spurting, counter-argument to the theory that women want sexiness to be subtle.

Steven Soderbergh’s original Magic Mike had a tangled and serious plot serving the socially progressive reminder that male strippers can be sensitive and complex as well as buff. Gregory Jacob’s XXL has a much simpler arc. This is a ‘getting the boys back together for one last show’ movie that – due to the location of the last show – is also a road movie. Everything that happens in between point a and b can be attributed to drugs, be they MDMA or performance highs. It’s a trip of a movie. And that’s its whole point.

The film opens with Channing Tatum wearing clothes and heaving furniture. His character, Mike, has long since ditched the ‘Magic’ stage moniker for the ordinary grind of running a carpentry business. A shot of him staring out at the sea encapsulates that adorable trope – the sad hunk – and lets us know that he’s not fulfilled. Fortunately he is punked into attending a pool party with his former troupe, The Tampa Boys, who pitch a brief hit escapism in the form of a stripper convention in Myrtle Beach, Florida. It will be everyone’s last roll of the thighs as the boys have been ditched by Matthew McConaughey and Alex Pettyfer (who are plying their trade in Macau, those turncoats). Everyone’s already talking about selling yoghurt and the other business opportunities that will come to define their working lives.

But first for something completely wild. The pull of high-gloss, nearly naked, technically brilliant and fantasy-embodying male entertainers is set up as a contrast to the humdrum routines that are always waiting. Like death, humdrum routine is an equal opportunities operator. It will wait for the Tampa Boys, for the screaming women they entertain and for us in the audience. The best aspect of the film is that it knows it is all a drill. No troupe of real-life strippers could so perfectly articulate their roles as glitzy, baby-oil covered social workers, selling sexual fantasy with every twinkly-eyed disrobing and sometimes giving it all pro-bono. For the movie bubble to fly high, we must all collude in investing in something deliberately at odds with anything that could exist outside of the film’s two hours.

The wheels of the road trip, which begins in a frozen-yoghurt van, are greased by an enlightened strain of bromantic bonhomie. Everyone gets a gag or two and shout out to Matt Bomer’s Ken for trying to impress people with the line, “I’m a Grade 3 Reiki healer.” But Tatum aside, Joe Manganiello as Big Dick Richie is the one that steals the show. After dropping some MDMA, Mike gets Dick to confess that his heart’s not really in his fireman routine. In a bid to get him performing a more relatable sexy role, they set him a dare to make a service station attendant smile. What follows will transform the way you think about The Backstreet Boys and drink fridges.

Big Dick’s dance is hot and funny but it’s not even the hottest and funniest thing going. It’s a tangent that is one of many. A drag club is visited, Amber Heard takes a picture of Mike pissing, Andie MacDowell’s house acts as a power keg. If the dialogue wasn’t so polished and pointedly referential (hitting everything from Narcissus to Twilight) then the tone would be set by woozy stoner logic. Pumped up men and elaborate settings are interchangeable but a marked constant is the breathtaking technical prowess of Tatum’s d…ance moves.

For anyone that forgot or didn’t know that Tatum was a professional dancer before becoming an A-list actor there is an early scene that will blow at least one part of your body. The glee of Mike’s precision-based moves is founded both in the fiery overtness of the sexual innuendoes and the fact that Tatum – a movie star at the peak of his powers – is willing to indulge the female and gay male gaze to the full extent of his skilful abilities. ‘Pony’ by Ginuwine is a filthy track with beats so squelchy that you have to pull your body fully free of them after each drop. Tatum keeps those beats while doing his own wild, pirouetting dance of seduction.

Magic Mike XXL might be tedious if gender-flipped because sexualised images are the norm when it comes to representations of women. They are not the norm for men. As such, it is a blast of cool air and a cascade of hot feeling to see male actors gamely committing to giving women what they want on the most base of levels. It would be a sin against the playful package that is Magic Mike XXL to rationalise too intensively too politically but in its own shallow way, the film represents diversity along racial, queer and size lines to an extent that is rarely seen in mainstream movies.

It all builds to dancing so dirty that Jacobs might as well co-opt the name of the Jennifer Grey-Patrick Swayze 1987 movie. It’s a miracle of well-crafted and well-executed dance choreography that such presumptuously sexual moves feel safe for the audience within the film. It may be an xxl reveal to say that in the most shocking moments of rhythmic rough and tumble, this writer wondered if this is really what women want. The answer came bursting out in three big letters.

That trailer got us all hot and giggly.

Sexual fantasy with a pumped-up heart and a sublime sense of the ridiculous.

*Cues up Channing Tatum dance-teasing us on a loop forever*