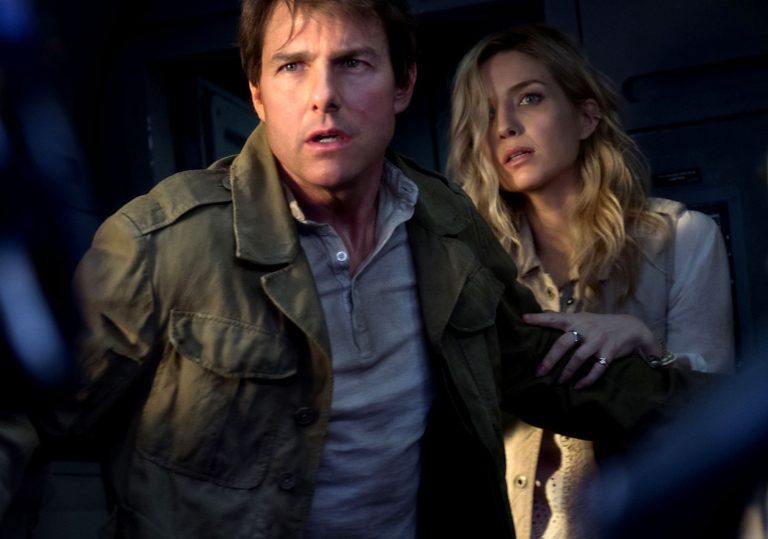 Even when the film is bad, Tom Cruise always brings value.

But not this time. He looks as lost as we were by the near-surreal final act.

Let’s kick things off on a small note of positivity – which, to be frank, is equivalent to a 10-man archeological dig amid scads of dusty, indistinct murk. Straight up, this film does some amazing things with torch technology. That’s right, torches. We guarantee you have never seen torches like these before. Tom Cruise plays Tom Cruise and is lowered into a pit along with some chattering mannequins. It’s dark, so in order to illuminate the surroundings, they break out some torches. As you do.

But these aren’t just normal torches, they’re double torches. So two torches, packed together like a double-barrel torch. Double the torches, double the light. And then, Tom’s awful comedy sidekick takes things up a notch, because he breaks out a quadruple torch. Yep – four stubby torches packed together. It’s unlike anything you’ve ever seen in the realm of torches. It’s cinema right at the vanguard of torch technology, and it’s a genuine thrill to behold.

The remainder of The Mummy does not manage to live up to the early high bar set by the super torches. Cruise is an advance party military scout fighting the good fight in Iraq, when a bit of bother involving a surgical air strike uncovers an Egyptian tomb containing some really bad things covered in mercury. Untroubled by all the historical mumbo jumbo being spouted by Annabelle Wallis’ dullard explorer, Jenny Halsey, he breaks out his super torch, up for bit of no-strings antiquity looting, but ends up resurrecting a 5000-year-old killer Mummy who wants to use Cruise’s hot bod as a shell for the God of Evil.

Then there’s some running around, an aviation snafu, and Cruise has a bizarre freak out in a pub lavatory (ladies). The torches, though, linger in the memory. Mainly because much of the film is shot in a way where you can’t actually see what’s happening. If anything, it feels like the CG technology has diminished since the heady days of 1999 when Brendan Fraser was taking on Ancient Egypt’s finest. Most of the action here takes place at night, in tunnels, in dim churches, underwater or in an underground cavern – all places that really could’ve done with some great torches. As it stands, you can’t see the facial expressions, you can’t see who’s doing what to whom, and you just don’t have any idea what is happening and why.

Despite Cruise’s best efforts to smarm up his largely bland and dashing huckster, the film crumbles around him. There are plot holes, and there are also plot black holes, which seem to suck up all information in the direct vicinity and instantly transport it to a random point at the other end of the galaxy, never to be seen again. Indeed, Cruise spends much of the film nodding and holding his chin like a sentient emoji while he’s having the plot explained to him. He’s probably secretly pondering why the hell he signed up to this thing – one of those clever actor tricks.

Playing the antagonist, Ahmanet, is Sofia Boutella, and her thing is that she has to get a person to a place by a certain time and make a sacrifice with a special tool in order to unleash foul torment on an unsuspecting world. She looks like she’s wandered in from the set of a Stevie Nicks music video (one of the bad ones). Fans of the Tobe Hooper’s mad sci-fi epic, Lifeforce, may see parallels in the “story” as both involve women sucking power from random strangers and running around London. Also, this one whiffs badly of Ron Howard’s value-netural Dan Brown adaptations, with its focus on people going to places and doing things (and constantly talking about it).

The long game here was for a new monster-based franchise multi-verse which dredged up the classic Universal Monsters from the vault and gave them a 21st century spit shine. If this opening gambit is anything to go by, two options remain: 1. send them all back to the vault where they belong and get some serious directors involved (guys, Guillermo del Toro would’ve smashed this), or 2. see how the box office pans out and aim for a hard reset, or at the very least a complete change of tone and tack. The only way this could pan out is for the second film in the franchise to be as radically different as Wonder Woman is to Batman V Superman.

Even when the film is bad, Tom Cruise always brings value.

But not this time. He looks as lost as we were by the near-surreal final act.