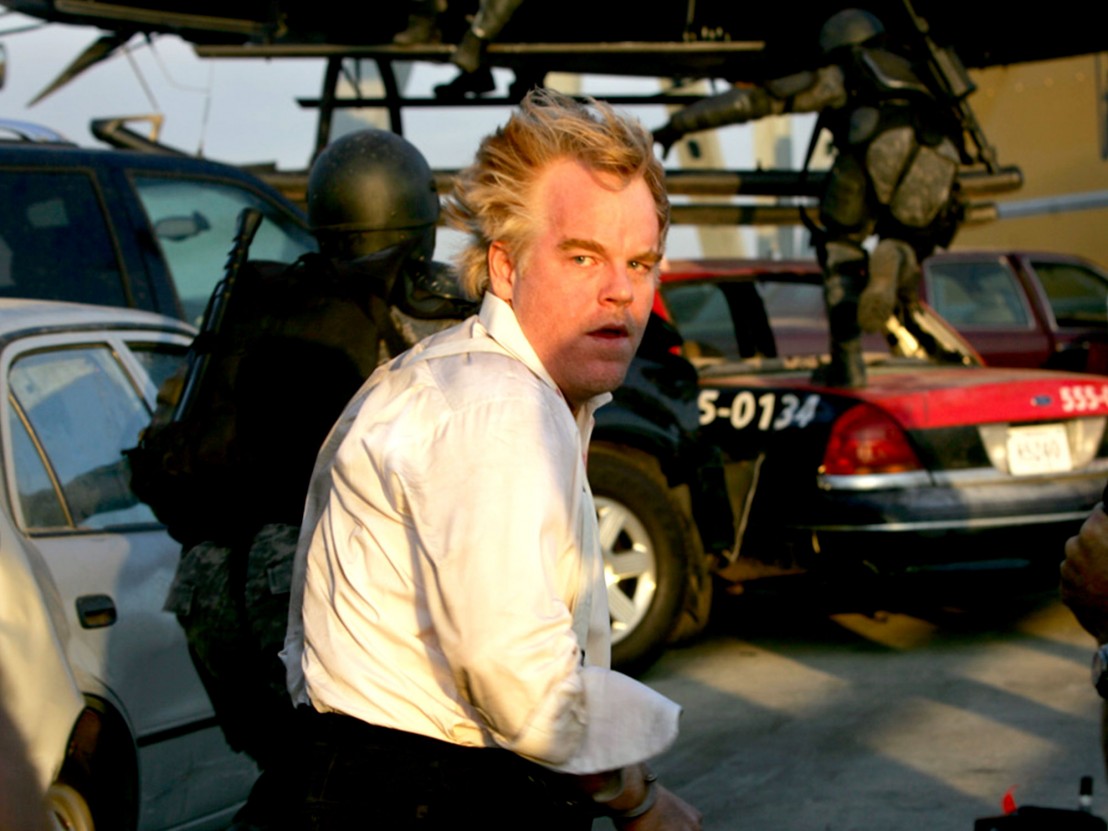 Owen Davian may not be Philip Seymour Hoffman’s best performance, but it’s the one that most readily displays his genius. The kind of Hollywood villain who’s usually this underwritten by accident, Davian is a generic arms dealer who spends the brunt of Mission: Impossible III trying to obtain a hilariously transparent MacGuffin called the “Rabbit’s Foot,” the explicit function of which is never made clear (a Simon Pegg speech inferring that it might be the “Anti-God” makes the device sound a like a nuclear Ice-nine).

Davian is nothing more than snarl and desire, his personality defined by the vague sense of boredom that the film’s unrelenting hero, super-spy Ethan Hunt, seems to inspire from him. “What I’m selling and who I’m selling it to,” he sleepily interjects as Hunt tries to interrogate him about the Rabbit’s Foot, “should be the last thing you’re concerned about.” He might as well be speaking directly to the audience. The device becomes so irrelevant that the eventual scene in which Hunt retrieves it is left to the imagination – instead, we spend that time in his getaway car listening to a supporting character monologue about her childhood cat.

Still, it’s astonishing to see how much something Hoffman was able to create from so much nothing. Davian is everything about the modern movie villain stripped to his function within the story — he isn’t just denied a background or a fuller emotional life, he’s disgusted by the mere suggestion that such details could be even remotely relevant to the narrative at hand. When Hunt begins to interrogate Davian (on a secret government cargo plane, after kidnapping him from a bathroom at the Vatican, while wearing a perfect latex mask of his face), he looks at the MIF agent the way that Philip Seymour Hoffman might have looked at someone who began interrogating him on a secret government plane after kidnapping him from a bathroom at the Vatican. He looks at Cruise the way that no one has looked at Tom Cruise since he was Thomas Mapother (IV).

Whereas the antagonists in most recent franchise films are composited together from exposition, easter eggs, and viral content, Davian is a tornado in a vacuum, a mechanism of a plot in which he has no interest in participating. He is a man defined by his job, and the movie makes a point of never filling in the details of his life beyond that. His nemesis, an indefatigable Chuck Jones roadrunner of a super-spy, is the flip side of the same coin.

Owen Davian may not have seen the first two Mission: Impossible movies, but he knows that there isn’t any boulder he can put in Hunt’s path that the IMF agent won’t find some way over, under, or around. His solution: deprive him. First of his job, then of his wife, and then of his identity. It’s the ideal pro/antagonist dynamic for an action movie that’s been stripped down to its chassis in order to become the pinnacle of its series and one of the most engaging mega-budget action movies of the last 10 years.

Robert Bresson famously said, “One does not create by adding, but by taking away.” JJ Abrams may not know the first thing about transcendental cinema, but he certainly understands that less can be more. Likewise, Mission: Impossible III isn’t exactly the world in an hour-and-a-half, but it certainly visits a lot of it.

Spy movies are naturally predicated upon questions of identity: protecting it (think Army of Shadows, or of that fucking NOC list from the first Mission: Impossible film), obscuring it (Tinker Tailor Soldier Spy), or solving it (The Bourne Ultimatum). Mission: Impossible, from its roots as a television series in the ’60s to its current incarnation as a globetrotting blockbuster action franchise, has remained keenly focused on faking it. Usually, that involves flawless perfect masks and uncannily perfect voice modification, but in Mission: Impossible III, Hunt first relies on a more rudimentary form of deception: domesticity.

The Mission: Impossible films start tabula rasa – Mission: Impossible II ends with Hunt getting together with one girl (Nyah, played by Thandie Newton), and Mission: Impossible III begins with him engaged to another (Julia, played by Michelle Monaghan). He’s retired from the field, doing his best to sell himself on the idea that the quiet life doesn’t defy every fibre of being. But the suburban dream is nothing but his latest and least convincing mask; the shapelessness of being a spy is his one true identity.

For the agents of IMF, identity is practically liquid, and “becoming” somebody else is as easy as using lasers to create a perfect likeness of someone out of latex, breaking into an exclusive party at the Vatican, spilling wine on your target’s shirt, subduing him in a conveniently empty bathroom, and forcing him to read a poem that includes all of the phonemes and morphemes contained in the English language.

To underscore that idea, Abrams crafts the franchise’s most clever visual effect: As Hunt is fitted into his Davian mask in the catacombs below the Vatican, the camera restlessly pivots around the back of his teammate Stickell’s (Rhames) head, setting up the expectation that Cruise will be swapped for Hoffman when the background of the shot is obscured (like how Peter Jackson tweaked the grammar of the typical shot/reverse shot construction to lucidly illustrate the Sméagol/Gollum dynamic).

But that’s not where Abrams makes the switch. Instead, he does it in plain sight, using some fine digital finesse to replace Cruise with Hoffman – without cutting – while Rhames adjusts the jawline of the mask. The seamlessness of the transition is only further emphasised by how Hunt is talking throughout, lecturing Stickell about how he’s going to settle down with Julia. His outward identity is as mutable as his underlying identity is fixed.

Davian, on the other hand, is such a severe threat because there’s absolutely no discrepancy between who he is and how he functions. He has nothing to hide. “Do you have a wife? A girlfriend?” It’s a pointed threat, but it’s even more powerful as a boast – Davian doesn’t have any of these things, he doesn’t have any chinks in his armour. There is nothing to his existence beyond what factors in the action of this film. His identity is his untroubled by the window curtains of a three-dimensional life, a fact that the film so vividly depicts by omission. Davian is a character at peace with the single-mindedness of his purpose, and Hoffman’s static performance – which achieves a nearly bovine sense of emotional calm (just look at his expressionless face in that shot where he’s being helicoptered away from the Chesapeake Bay Bridge) – makes that self-actualised clarity feel terrifyingly dangerous.

The shadow cast by Davian’s persona swamps the action scenes in a palpable sense of panic from. Danger is something with which Hunt is intimately familiar, but the topsy-turvy disorder he feels as he fights back against Davian’s henchmen and then – as his professional identity is stripped away – tries to run from the IMF agents that have been ordered to bring him in, is completely foreign to this franchise.

It’s the same confusion we see in the pre-credits sequence, when Hunt can’t understand why Davian is saying that he doesn’t have the Rabbit’s Foot. This slob of a villain, who rocks a blotched purple stain on his chest for the brunt of his time on screen, allows Hunt to see his own reflection through the grotesque distortion of a fun house mirror. Hunt may be invincible, but the people around him are not – his happiness is his Achilles heel, and it’s more exposed with every step.

In a rare bit of carryover, the Mission: Impossible franchise’s fourth instalment would explicitly prove that Hunt could never keep all of his plates spinning, and that the man – like the heroes at the centre of most major studio movies – is just a job with a good haircut. After the third film’s dream-like fantasy of a final scene, in which Julia meets (and hugs!) Hunt’s teammates back at IMF headquarters and then embarks on her honeymoon with her new husband, it’s clear why Owen Davian is such a brilliant blank: he’s able to detonate Hunt’s life so easily because he knows full well that the best spies are always deceiving themselves.