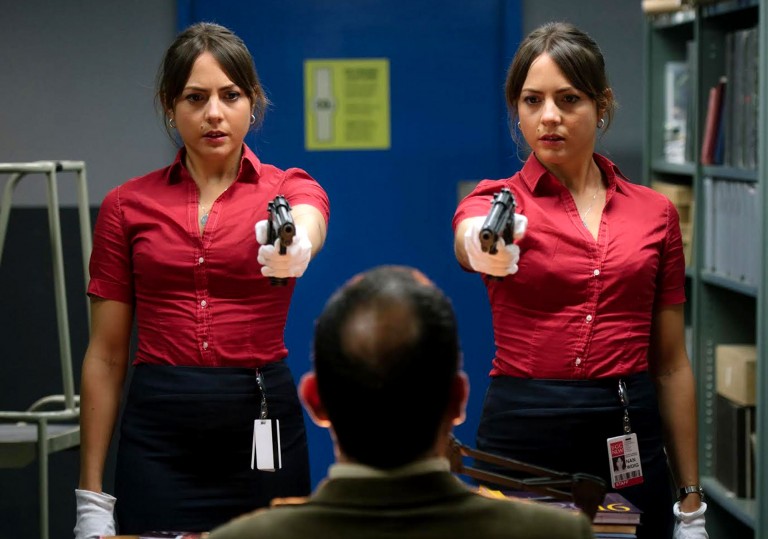 A Welsh-language psychological thriller is an appealing market outlier.

...Until the very end spoils the goodwill.

After a string of high-profile TV gigs on the likes of Daredevil, Broadchurch and Happy Valley, The Library Suicides sees director Euros Lyn return to the feature filmmaking fold with a twisty psychological thriller. Adapted from the Welsh-language bestseller ‘Y Llyfrgell’ by Fflur Dafydd, what sets the film apart in the current British cinema landscape is its retaining of the Welsh language, a unique setting for its cat-and-mouse games, and a committed dual performance from Catrin Stewart.

When a famous author (Sharon Morgan) seemingly commits suicide by jumping out of a window, her final words to those assembled around her as she perishes on the street suggest that her biographer, Eben, (Ryland Teifi), in fact murdered her. Ana and Nan (both played by Stewart), her twin daughters and witnesses to that insinuation, are lost without her, and so conduct an elaborate plan to enact revenge upon the suspected man. Exploiting their labyrinthine workplace at the National Library of Wales during a night shift, all seems to be going smoothly, until one, unaccounted for security guard (Dyfan Dwyfor) ends up disrupting the saga of vengeance. Intended victims soon escape and various loyalties start to shift from there.

With a slick but dour aesthetic that recalls the look of much of the so-called ‘Nordic Noir’ fare crossing into the British mainstream, The Library Suicides offers a familiar but efficiently taut set of pleasures, at least for a while. As the identical twins, the intense Stewart excels at bringing nuance to the widening moral gap between the pair when it comes to going through with this most extreme act.

It’s the grand finale where things start to flounder. As adapted by the novel’s author, Fflur Dafydd, The Library Suicides concludes with the sort of narrative turn that actively sours what’s come before it. The sort of twist that may well work on the page, which allows for a lot more time with characters’ psychology and internal dialogue than an economic 87-minute runtime, but that onscreen comes across as particularly hokey. And nor is it even an especially distinctive reveal to at least make the film linger in the mind on sheer daffiness alone – if you happened to devise a twist in your head just from reading the twins’ names, you’ve probably guessed correctly.

A Welsh-language psychological thriller is an appealing market outlier.

...Until the very end spoils the goodwill.