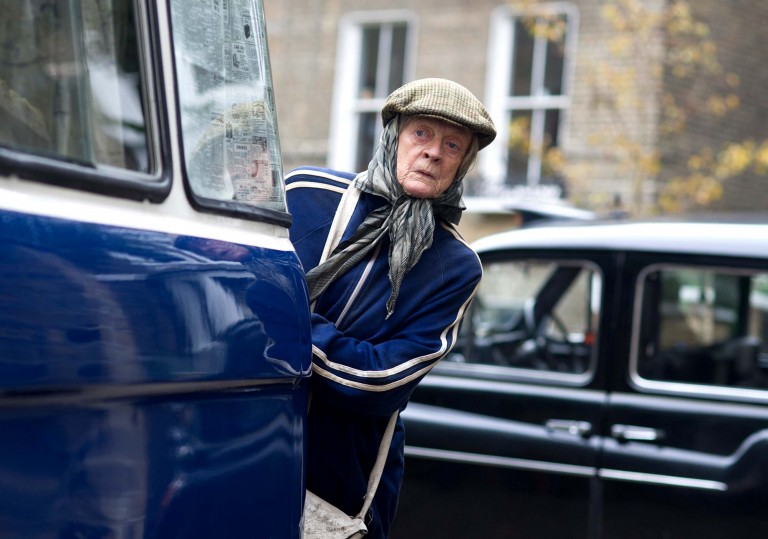 Looks like the cosy essence of middlebrow British cinema.

A complex relationship drama dressed as a jolly biopic.

Bequeaths a respect for oddball muses and their secret stories.

In the early 1970s, playwright Alan Bennett became acquainted with an ageing female hobo who parked her van on his posh Camden crescent and stayed there for 15 years. He channelled this experience into a comic memoir which became a play which has now become a film. The directorial style of National Theatre don, Nicholas Hytner, mimics Bennett’s cagey mode of being.

On the surface, The Lady in the Van is mild to a fault but – like its author – it is powered by sharp observations about life and people. The film is about life becoming art but also its flip-side: the need for a muse prompting an artist to engage with life. As Bennett, Alex Jennings essays a character who is more inclined to observe than participate.

His bespectacled face is impassive. His dress is the presentable uniform of an English professor. Only his thatch of strawberry-blonde hair and a red tie hint at the colourful ideas that absorb his waking hours. Within the film’s tone, Miss Shepherd (Maggie Smith) is a comic foil, shaking up her well-heeled neighbourhood with her aromatic antics.

Within the context of Bennett’s social storytelling, she acts as a truth serum, antagonising all around her into revealing what lies beneath the polite veneer of civilisation. Within Bennett’s life, she is a catalyst for self-development. Within her own right, she is a mystery wrapped in a glare encased in a van. For Miss Shepherd is not a character that homelessness has made grovelling or grateful. She is imperious and suspicious, reacting to all acts of generosity with a sense of queenly entitlement.

The liberal intellectual neighbourhood accepts her presence with artificial cheer thats turns to horror when she gets within smelling distance. Smith knows the shades of her character inside out. Her acidic reaction to her neighbours is a reliable device for diverting attempts to get to know her. Smith trades on surface ferocity telegraphing vulnerability only through eyes that peer out of her withered, battle-ready form.

Bennett becomes her protector while denying that he is motivated by kindness. He is otherwise preoccupied by talking to himself. Jennings plays dual Bennetts in a device that unfolds with quaint politeness. Divided beings need not signify psychopathology. Had Fight Club been concerned with the internal negotiations of a timid wordsmith there would have been no blood spilt – only ink.

Sub-plots involving Bennett’s mother and a shady figure (Jim Broadbent) who has incriminating information on Miss Shepherd are slight and unwelcome distractions from the film’s buddy movie core. Bennett and Shepherd are portrayed as solitary creatures who sense a kinship while avoiding closeness. Hytner makes parallels between Miss Shepherd’s furtiveness and Bennett’s closeted sexuality through structure rather than on-the-nail dialogue.

As his observations about her life deepen so the writer emerges from his cautious shell. As he notes: “You don’t put yourself in your writing, you write to find yourself.” In this peculiar but intimate dance between he and the lady in the van the delicate symbiosis between a writer and their subject is given its dues.

Looks like the cosy essence of middlebrow British cinema.

A complex relationship drama dressed as a jolly biopic.

Bequeaths a respect for oddball muses and their secret stories.