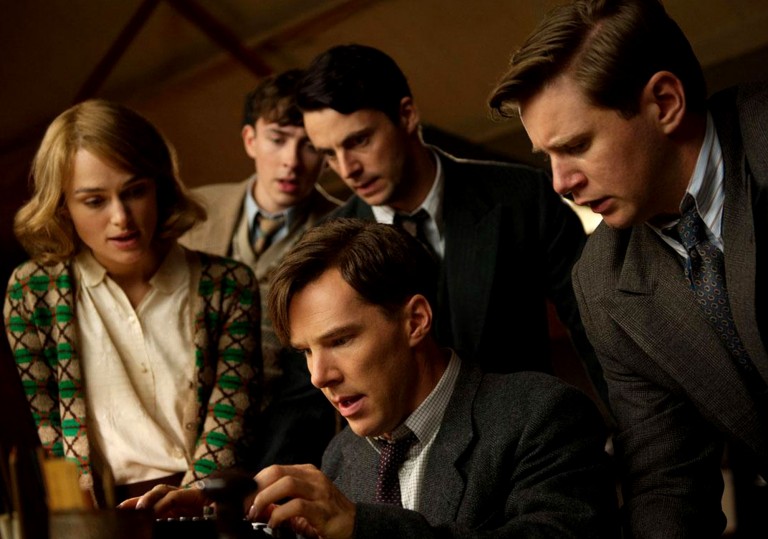 Seems to fall in the gap between cheesy prestige pic and noble biopic.

Ridiculous but occasionally enjoyable and poignant.

Amounts to less than it should but still worth a jaunt.

World War Two code-breakers! A dramatic true story! Period suits and tea dresses! Benedict Cumberbatch! Keira Knightley! Plummy accents! Hammy dialogue! The ingredients and trappings of director Morten Tyldum’s The Imitation Game are giddy to the point of distraction. But what lies beneath? The story of Alan Turing — maths genius, national hero and closeted homosexual — doesn’t so much lie beneath as battle for dominance. His story is interesting and worthy but the filmmaking works like a frenzied criminal throwing obstacles in the path of those trying to follow.

Which isn’t to say that Cumberbatch as Turing is any less perfect than one might imagine given his proven ability at playing ingenious outsiders. His portrayal of the rude and justifiably arrogant Cambridge graduate is pitched to hit comic extremes. This is epitomised when he announces in his Bletchley Hall interview: “Mother says I can be off-putting sometimes, on account of being one of the best mathematicians in the world.”

Charles Dance as the piercing-eyed Commander Denniston is not amused or charmed. Tyldum is interested in creaming off and calculating the extent to which people require social grace served with their encounters. It’s a shame that screenwriter Graham Moore (who adapted Andrew Hodges’ 1983 biography, ‘Alan Turing: The Enigma’) routinely strives to find comedy in the awkwardness as it dilutes the tension, turning the picture from a serious drama to a dramatic irony-driven comedy doing a disservice to the place where the story ultimately ends.

But this tragic information is saved till the last. The majority of the film is concerned with the jolly-hockey-sticks team-building shenanigans that ensue when Turing is assigned to crack the Enigma code. He is also charged with building a team that includes — gasp — a woman, Joan (Knightley), handsome, reasonable sort, Hugh (Matthew Goode), shifty, worldly type, John (Allen Leech) and young sweetheart, Peter (Matthew Beard). His troubles are shown to be split four-ways, between the Germans, his teammates, the command and a formative schoolboy relationship revealed in the most misty-eyed of flashbacks.

While it is doubtlessly Cumberbatch who will pick up the biggest accolades for his studied and serious performance, Keira Knightley as Joan provides a much-needed dose of warmth and sense. Her spirited and intelligent performance is filtered through a hesitance that comes from knowing that her character could be sidelined at any moment on account of her gender. The chemistry that flickers between she and Cumberbatch is nurturing and indulgent. It is she that nurses the plot along by helping her friend to develop the skills to work with other people.

There are interesting ideas at work in the presentation of Turing’s struggles. Social interaction is presented as the most intricate of codes. (It’s true that people usually hint at rather than stating exactly what they mean.) However, despite the chest-beating prestige picture credentials inherent in Turing’s story, it seems that Tyldum and his collaborators want audiences to take the film seriously but not that seriously. Dramatic reveals occur in the most hilariously contrived fashion and triumphant zingers like, “Love just lost Hitler the war!” never cease to jolt your head out of the narrative and into your palm.

Everyone involved in this production has talked about the importance of bringing Alan Turing to the limelight. There has been some success in this regard. It’s just not clear whether this tongue-in-cheek effort does justice to the most mysterious and mathematical of men.

Seems to fall in the gap between cheesy prestige pic and noble biopic.

Ridiculous but occasionally enjoyable and poignant.

Amounts to less than it should but still worth a jaunt.