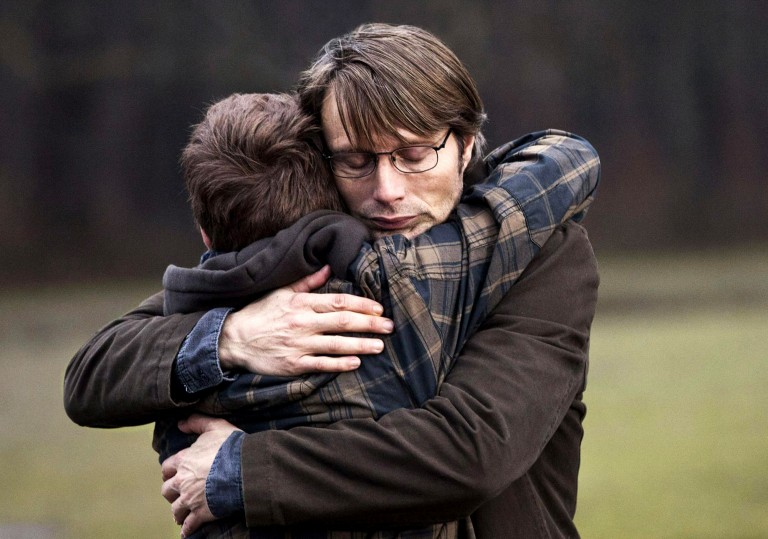 The long-in-the-wilderness Vinterberg gained a coveted Cannes competition slot with this latest drama.

Coming across like a tawdry TV movie desecration of Alfred Hitchcock’s 1956 drama, The Wrong Man, Thomas Vinterberg’s The Hunt sees the genial, liberally minded denizens of a leafy Danish suburb transform into revolting hate mongers at the mere whiff of social discord.

It’s a case of guilty until proven innocent for kindly nursery school teacher Lucas (Mads Mikkelsen), who is wrongfully accused by one of his pint-sized pups of some unsavoury extra-curricular activity. Wild, spurious hunches trump basic rationality as Lucas is swiftly ostracised from the community while awaiting formal charges to confirm to all that he is indeed a repugnant sex pervert.

Operating under the supposed truism that adults will always take the words uttered by their children at face value, Lucas’ ‘crime’ drags him to the level of brooding, Kafka-esque patsy wherein, for reasons unknown, he refuses to argue his case or offer an alibi.

Manipulative in the extreme, Vinterberg’s film masquerades as sage social critique when in fact it has all the psychological credibility of a cheapjack soap opera. Its central glitch is that Lucas’ innocence is never in doubt, and so the process of watching the film is simply a case of waiting until he’s absolved.

That the plot machinations of The Hunt don’t bare close scrutiny is only part of the problem: Vinterberg has obviously worked closely with his cast to sculpt naturalistic, free-flowing performances, and you’d be hard pressed to lambast Mikkelsen’s stoical central turn. But, alas, Vinterberg has only succeeded in creating crude ciphers, not complex human characters.

The film’s hysterical ‘children are evil’ credo is more pronounced and withering than even The Omen, and the manner in which it tackles these issues is at best irresponsible, at worst plain dangerous. It amounts to the very same alarmist tabloid balderdash that it supposedly decries.

The long-in-the-wilderness Vinterberg gained a coveted Cannes competition slot with this latest drama.