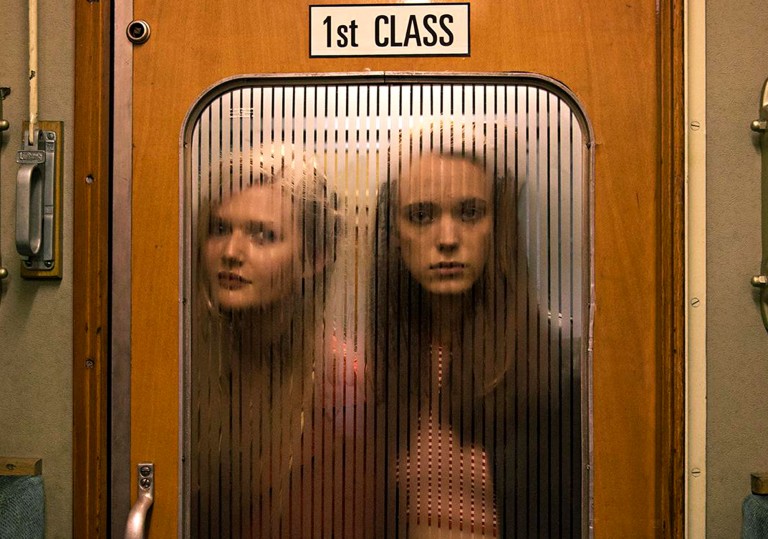 A surprising amount of soul for a film supposedly about base sexuality.

Forget the headline-grabbing sexploitation-based marketing images that have been gleefully circulated online. The slimline version (two times two-hour volumes instead of the director’s preferred five-and-a-half hour cut) of Lars von Trier’s digressive, character-driven odyssey may show a lot of naked fun times, but it is more deeply concerned with loneliness, self-loathing and what becomes of a person whose behaviour takes them beyond the limits of polite society.

Volume One begins on an exquisite snowy evening. Soft powder settles on rooftops in a classically framed montage of establishing shots. Dripping sounds lead the camera down from sky to the alleyway where Joe (Charlotte Gainsbourg) is lying battered and bruised. As in Melancholia, von Trier relishes bookending the grimy world of human suffering with scenes of natural grace.

Seligman (Stellan Skarsgård in his least creepy von Trier role to date) chances upon Joe and takes her back to his sparse bachelor pad for tea, tenderness and, after some coaxing, her life story, which unfolds in eight titled chapters. Between each chapter we return to Joe and Seligman in their single theatrical location, the former arguing that a life dedicated to wild sexscapades has transformed her into a bad person while the latter draws on a well of scholarly knowledge to explain that her behaviour is not abhorrent and has reflections in history, nature and literature. Some of Seligman’s parallels are so imaginative and recounted with such enthusiasm that the severity of Joe’s self-lacerating narrative is blown to smithereens in bursts of pure, joyful imagination.

A succession of child actresses ending in impressive 22-year-old newcomer Stacy Martin play Joe in the flashbacks for all of Volume One and some of Volume Two. Joe’s nymphomania is presented first as undefined desire, then as the expression of female power, then as a war against love. “For every 100 crimes committed in the name of love there is only one committed in the name of sex,” is the rationale.

Yet, surprisingly (for a film with a poster campaign full of faces during climax) there is a chapter – Jerôme – dedicated exclusively to love, an emotion that discomforts Joe. “Love appeals to the lowest instinct wrapped up in lies,” she says. Plain-speaking denunciations of the world’s most romanticised emotion creates a Herzog-like tone of chaos, especially as Joe seeks solace from her feelings in nature, ruminating on the trees that, somewhat unconvincingly, were beloved by her father (Christian Slater).

Family life is threaded through Volume One in an attempt to root Joe to conventional reality but it never truly belongs. Joe is a mythic character, a fanciful vessel for fascinating and under-explored psychosexual musings. What if the only truth that mattered was erotic? In Volume One, partly due to the unblemished beauty of Martin and partly because youth is the most forgiving time of anyone’s descent into darkness, this truth is photogenic and – heartache aside – a joyful ride. Uma Thurman is on fire as a jilted wife and even Shia LaBeouf pulls his weight as a baffled hunk. German industrial metallers Rammstein roar over the beginning and end credits and an edited preview of Volume Two stokes anticipation for what is to come.

Volume Two, it turns out, is a darker beast posing darker questions: What if desire for increasingly less palatable gratifications was the only abiding motivation for living? What if these appetites existed in a humane character with the ability to judge themselves? In the clash between superego and id, Nymphomaniac finds a compelling angle even as the flashbacks become more far-fetched and rambling. Of the additional star turns, Jamie Bell is the most memorable, with one hollow-eyed sweep of a stick banishing Billy Elliot from existence.

A dark chemistry burns between him and Gainsbourg (who has taken over as Joe) that is not felt between her and grating, irrelevant characters, L (Willem Dafoe) and P (Mia Goth). Yet as demanding obscurity takes over in the recollected stories the recurring scenes between Gainsbourg and Skarsgård continue to sparkle with vitality. It’s clear (and LVT has confirmed) that we’re witnessing a moral argument between two sides of the Nymphomaniac creator’s mind and in the hands of his trusted collaborators it plays out as raw, personal and loaded.

The depiction of sex is at all times a narratively essential illustration of Joe’s calling, chronicling the light, dark, funny and painful places that it takes her. 90 minutes are missing from this version and we can only guess at what this feature’s worth of missing run-time adds to the picture. ‘Nymphomania’ and its clinical alternative label ‘sex addiction’ are toyed with and it is down to the viewer to decide where the line is between a healthy appetite and something that might be deemed more pathological.

The film is not a perfect work and vacillates greatly in quality, particularly in Volume Two, but the successful sequences are so rich in thought-provoking representations of big subjects and so distinctively the work of its singular and taboo-flouting director that it all makes for essential viewing.

A surprising amount of soul for a film supposedly about base sexuality.