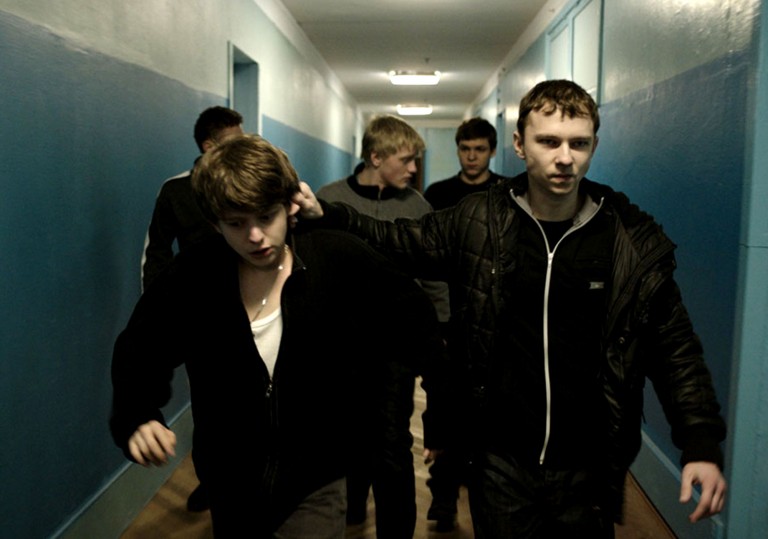 Maybe not quite ‘enjoyment’, but definitely rapt engagement.

This uncompromising rites-of-passage allegory is a sign of the times.

While recently Michel Hazanavicius’ The Artist and Miguel Gomes’ Tabu have pastiched the mimetic motifs of Silent Era cinema, and other filmmakers (notably Aki Kaurismäki and Kim Ki-duk) have used their characters’ voicelessness as alienation symptom and effect, The Tribe finds an entirely naturalistic setting for its speech-free mode of filmmaking: a boarding school for deaf-mute children.

Here all communication is through signing, and as Ukrainian writer/director Miroslav Slaboshpitsky provides no subtitles for these expressive gesticulations, there exists only a tiny niche viewership privileged to comprehend the dialogue fully. The rest are left to eavesdrop on this story from the outside, much as Valentyn Vasyanovych’s camera keeps its distance, whether through windows or across noisy streets, from the film’s few spoken lines, so that they remain tantalisingly out of earshot.

Not that the story is so hard to follow. Teen Sergey (Grigoriy Fesensko) joins the school and quickly rises in the hierarchy of the seniors’ gang which, with the connivance of a woodwork teacher, engages in acts of racketeering, prostitution and robbery. Yet as Sergey falls deeply for fellow pupil Anna (Yana Novikova), his destructive drives risk bringing the whole system down.

Unflinching about its characters’ sexuality and criminality, Slaboshpitsky’s feature debut is a film of actions and consequences, where a slowly reversing truck will lead to the need for a new pimp, and where graphic intercourse will lead to equally graphic abortion. It is mostly, though, a film of process and iteration, whether the repeated sequences of the schoolgirls being pimped at a truck stop, or the rhythmic thrusting of the sex act itself. And all these repetitions find their perfect symmetry in the bleak, bludgeoning final sequence where an act of vicious revenge is redoubled – twice.

The Tribe boasts a cast of deaf non-professionals who hammer hard at the cinematic convention of portraying the disabled as noble and naïve. In the absence of words, the film never shrinks from its observations, catching in long takes and aloof tracking shots the ritualised activities of this pre-adult gang. This is a film whose surface rigour conceals a litany of shocks.

This is also a stark coming-of-age film, in which Sergey must negotiate both the tribal structures of his peer group and the burgeoning demands of his own individuality. Yet it is also an allegory. The first class that Sergey attends in his new school is a geography lesson on the EU. Anna goes through the motions of migrating to Italy. Yet these deaf children’s marginalisation, exclusion and consequent delinquency serve as clear – if not quite loud – signs for Ukraine’s relationship with Europe.

Ukraine may not look or be all that different from its neighbours to the west, but so long as its identity is in transition between two states (the EU, Russia) and its voice is not always heard, it remains an unruly, adolescent nation, torn apart by violence.

Maybe not quite ‘enjoyment’, but definitely rapt engagement.

This uncompromising rites-of-passage allegory is a sign of the times.