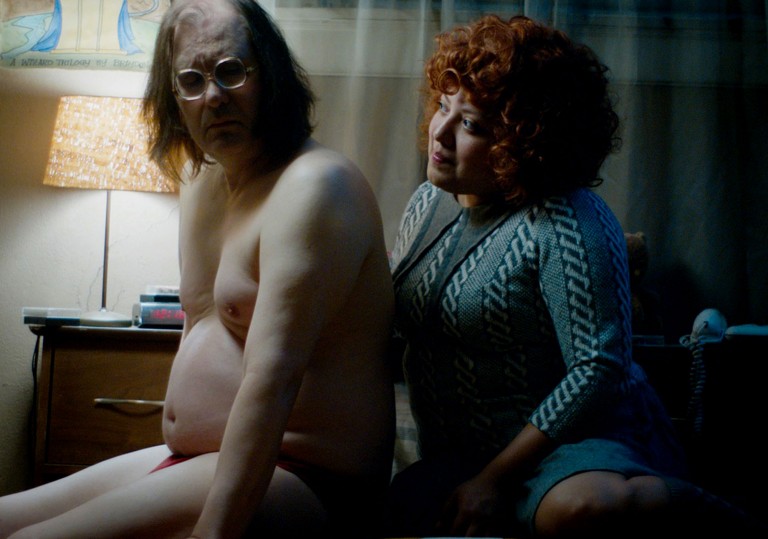 A midnight movie that’s been hyped in certain (sick) circles.

It’s like Monty Python’s Meaning of Life meets Cruising in a deep-fat fryer.

Occasionally, film marketers will produce an TV advertisement which includes footage of cinema patrons watching a movie. It’ll be in night-vision, and it’ll usually capture the moment of a jump scare where the crowd collectively jolt in their seats. It would be interesting to see one of these adverts made for viewers watching Jim Hosking’s The Greasy Strangler. Collective jolts might not appear. There would be lots of grimacing, dry-heaving, people looking away from the screen, maybe even walking out in abject disgust. There would be laughing too, but not big belly laughs, nervous laughter, like when someone comically spills soup over their legs.

Set in a concrete Los Angeles backwater, the film follows Michael St Michaels’ Big Ronnie and his son Big Brayden (Sky Elobar) as they conduct disco-themed tourist trap walking tours (dressed in matching pink hot pants) and subsist on a diet of food doused in grease. A killer is on the loose – a grease-caked monster who looks a whole lot like Big Ronnie, with his lank white hair and bulging eyes. Elizabeth De Razzo’s paunchy nymphette Janet enters the fray, initially declaring her love for Brayden, and then transferring over to her father. An Oedipal war of attrition ensues.

Everything in the film is anti-dramatic, more akin to Dadaist sketch comedy intended to exist in single, short fragments. Its commitment to incredible stupidity is laudable, and just when you think a joke has been pushed to its absolute outer limit, that it couldn’t possibly be any more sick or idiotic, director Hosking will nudge it just that little bit further. It’s a film which proves that if you’re very creative with make-up, costumes and props, then you’re half way there. You don’t need to spend ages writing clever jokes either. Michael St Michaels’ description of pasta shapes is one of the film’s dialogue highlights.

While the film isn’t about anything and has no structure, there’s a crap-shoot intrigue knowing that anything could happen next. The Greasy Strangler defies genre, western logic and it clasps good taste by the throat until its eyes pop out. Everyone involved in the production is completely on the level – they know exactly what this is. And that’s why it works. And for all those grease fetishists out there: for you, this movie is a little like winning the lottery twice on one day.

A midnight movie that’s been hyped in certain (sick) circles.

It’s like Monty Python’s Meaning of Life meets Cruising in a deep-fat fryer.