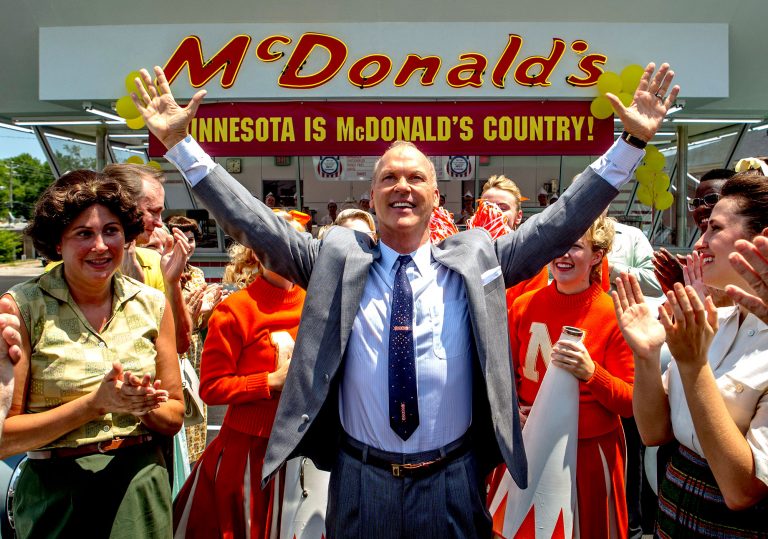 The terrible feeling that this might be another capitalist success story...

Aesthetically nothing exceptional, but the performances are great and the story just incredible.

A special, worthwhile film that promises more confrontational Hollywood films in the future.

In 2008, the financial crisis ruined the lives of millions of Americans. Then, in 2012, Martin Scorsese’s dizzying satire of greed, The Wolf of Wall Street, went widely interpreted as an inspiringly gung-ho tale of ruthless success. And only a few months separate us from the election of a well known crook as President of the USA.

Yet today, John Lee Hancock’s McDonald’s origin story The Founder presents, at least conceptually, the refreshing possibility of an unambiguous critique of capitalism. In its iconography, business model and global reach, McDonald’s represents a short-hand for the economics of American capitalism and cultural imperialism. At the most crucial moment imaginable, Hollywood has the real opportunity to explore the dark side and expose the real consequences of an industry bewitched by big business, raw profit and individual interest.

Unlike more straightforward financial satires, however, The Founder presents an alternative. The film goes deeper in its analysis, convincingly demonstrating how the pursuit of pure profit has not always been the principal goal of American business. Like all six seasons of Mad Men before it, this film conceives of that goal as a relatively recent development. Contemporary America is the world leader when it comes to free enterprise, so the film touches a pretty sensitive nerve in the context of US culture.

As the film openly and daringly acknowledges, McDonald’s today is such an integral part of American identity, so wrapped up with the concept of profit at the expense of quality, that few would suspect it did not at all start as an exercise in pure avarice.

This is the untold story of two wholesome brothers whose honest-to-goodness hamburger business was stolen from them and transformed into a global monolith. The film focuses on travelling salesman Ray Kroc (a terrifically committed Michael Keaton), the ‘founder’ referred to in the film’s ironic title. Progressively exploiting humble brothers Dick (Nick Offerman) and Mac (John Caroll Lynch) who came up with the company concept, Kroc is presented as a ruthless specimen. The film’s matter-of-factness exposes what Kroc – in pure American Dream parlance – refers to as ambition for the selfish greed that it actually is.

Unusually for what is a conventional Hollywood product (and perhaps for legal reasons) the film often lets the audience fill in blanks with odd narrative ellipses and remarks from characters that inevitably, and with a profoundly sad irony, hint at the state of McDonald’s today. When Kroc suggests replacing real ice-cream with cheaper instant solution, Dick remarks, “why not have frozen fries, too?” For a moment, a brutal shadow is cast in this otherwise mild, not particularly confrontational film.

Though it is rather blandly realised, poorly scored and perhaps not aggressive enough when it presents Kroc’s obnoxious attitude towards the brothers and his wife Ethel (a criminally under-served Laura Dern), the potential for this surprisingly little-known story to shake American culture to its core makes it a worthwhile enterprise. If this open attack on the baseness that furthers capitalist greed can touch more people that way, and at a point when the ultimate capitalist ‘success’ story has just become POTUS, then it is more than welcome on screens.

The terrible feeling that this might be another capitalist success story...

Aesthetically nothing exceptional, but the performances are great and the story just incredible.

A special, worthwhile film that promises more confrontational Hollywood films in the future.