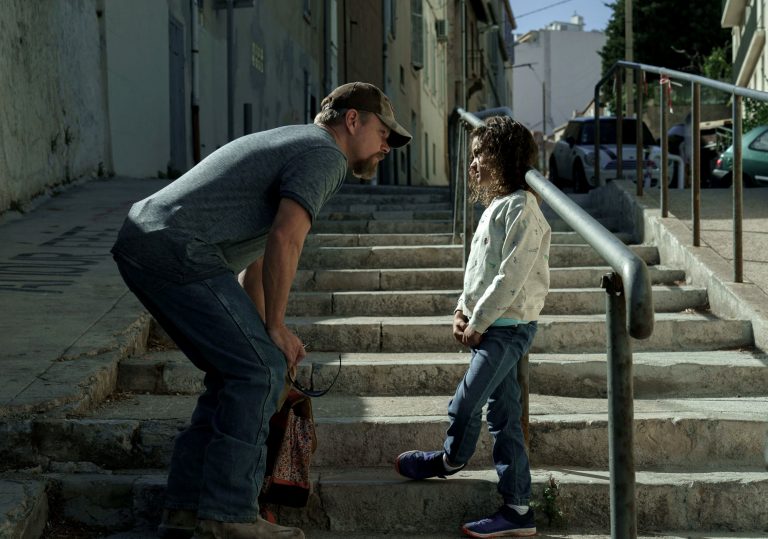 The trailer didn’t do this one any favours…

A messy, voyeuristic take on a real-life tragedy.

Matt Damon fights for his daughter’s freedom in Tom McCarthy’s turgid drama based on the murder of Meredith Kercher.

Multihyphenate movie man Tom McCarthy has a varied credit list. Notable highlights include playing a corrupt reporter in The Wire, working on the story for Pixar’s geriatric tearjerker Up, and being responsible for Adam Sandler shoe fantasy drama The Cobbler. But most know him as the writer/director of 2016’s Best Picture winner Spotlight, which portrayed the Boston Globe’s groundbreaking reporting into historic sexual abuse within the Catholic church.

Winning an Oscar isn’t necessarily a guarantee of future work, but McCarthy’s career has taken a strange turn since then. He worked on the screenplay for Marc Foster’s Christopher Robin in 2018 alongside Alex Ross Perry and Allison Schroeder, then wrote and directed 2020’s kid-friendly comedy Timmy Failure: Mistakes Were Made for Disney+. His latest project is a return to more adult territory, even if tonally it retains some of the chaotic energy McCarthy’s CV possesses.

Matt Damon plays Bill Baker, a rough-hewn Oklahoman oil worker who makes frequent trips to Marseille to visit his daughter Allison (Abigail Breslin), who has been in a French prison for several years following a conviction for the murder of her girlfriend and roommate Lina. Allison maintains her innocence, and when a new lead in the case presents itself, Bill sees an opportunity to do right by her after failing as a father when she was young. Navigating a foreign legal system proves to be an uphill battle, however, so Bill turns to his new acquaintance – single mother and actress Virginie (Camille Cottin) – for help.

Similarities with the real-life 2007 murder of Meredith Kercher are obvious from the outset, and convicted-then-acquitted suspect Amanda Knox has spoken out against the film on ethical grounds. Although Damon and McCarthy have claimed there was no singular inspiration for the story, the script (written by McCarthy, Marcus Hinchey, Thomas Bidegain and Noé Debré) touches on some of the real-life speculation surrounding the Kercher case; Bill brushes up against tight-lipped teens and dirty coppers in his pursuit of the truth, and quickly realises he’s in over his head.

If this sounds like the recipe for a fairly textbook thriller, McCarthy makes some questionable narrative choices which lead to a sense of narrative whiplash. The core storyline butts up against a romantic subplot, while racial and class tensions in Marseille are also touched upon, as well as the potential violence of white women’s tears. There are a lot of ideas crammed into the film’s 140-minute runtime, and they often compete for attention to its detriment.

A thriller exploring the weaponisation of white female fragility and white male violence is an intriguing concept (and a more interesting one than Stillwater can really deliver) but this theme is explored only as an afterthought. Bill’s relationship with Virginie and her young daughter Maya, who represent another chance at redemption, is given much more screen time, to the extent it feels like Bill forgets why he’s in Marseille for about a third of the film.

Denis Villeneuve’s Prisoners is perhaps the closest cinematic comparison, though a better-executed tale of desperation and guilt. Stillwater gestures towards prescient issues and questions that we rarely see white filmmakers grapple with, but overall the film feels unfocused and fails to pack a real punch. It’s a disappointing, uneven and overlong film, but there’s something oddly compelling about how messy the end result is.

The trailer didn’t do this one any favours…

A messy, voyeuristic take on a real-life tragedy.