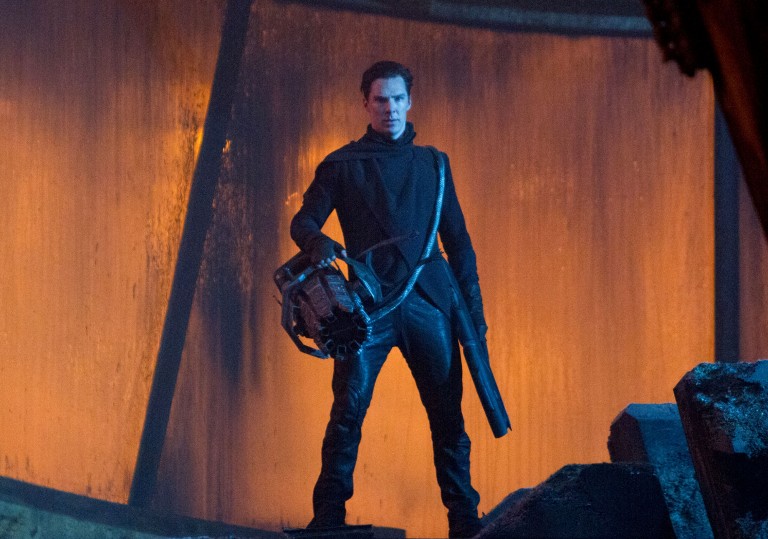 JJ Abrams can do no wrong.

A solid but infrequently spectacular addition to a rejuvenated franchise.

Will this newest crew ever hit warp speed again?

As the opening frames of JJ Abrams’ 2009 franchise reboot flashed past at bone-vaporising warp speed, Trekkies around the world, still clutching their asthma pumps in sweaty apprehension, wiped the photon dust from their glasses and breathed a heavy sigh of relief.

Jump forward to 2013 and the stakes have never been higher. Not for Starfleet’s maverick rookie captain and his loyal crew. And not for Abrams, whose own stewardship has come under increased scrutiny since rising to the unenviable challenge of re-energising another hallowed space opera. Of course, the director’s stock has risen substantially over the last few years – most recently after his spellbinding post-modern blockbuster Super 8. Even the most obstinate Star Wars fanatic would be hard pushed to argue that Episode VII looks in danger of being chebbed up.

But enough fandom pandering. Not because this isn’t the time or place to discuss the fate of sci-fi cinema’s most extensively chartered frontiers, but because Star Trek Into Darkness simply doesn’t afford you the time to do so. This is, after all, a JJ Abrams movie, and in JJ Abrams movies, breakneck pacing and breathless set pieces are par for the course. Sometimes even the characters struggle to keep up. In this instance, however, it’s our hero’s overeagerness that proves his undoing.

After pulling off a reckless manoeuvre in order to rescue his latest mission (and his best friend in the process) James Tiberius Kirk (Chris Pine) is summoned back to Earth and promptly stripped of his command. Then, just as Kirk’s bitterness turns to self-reflection, Starfleet HQ is compromised by a rogue asset and before you can say ‘tribble’ he’s slipping back into his mustard overalls and setting off across the galaxy in hot pursuit of the perpetrator.

The USS Enterprise’s new mission: to take out John Harrison, a merciless defector of superhuman cunning and strength played with thespy malevolence by “the high-cheekboned, blue-eyed sexbomb that is Benedict Timothy Carlton Cumberbatch”, as he’s gushingly described on the @Cumberbitches profile page. Revenge is high on the menu, but in order to get his man Kirk will have to adopt a more prudent leadership style, not least because Harrison has taken refuge on the planet Kronos. One thing’s for certain, Kirk can’t afford to be Kahless.

Where Eric Bana’s tribal inked evildoer Nero was largely sidelined by Roberto Orci and Alex Kurtzman’s origin script, Cumberbatch is the sequel’s MVP. For fans of TV’s Sherlock and members of the abovementioned Twitter appreciation society, this will come as sweet validation. But while Cumberbatch steals the show, it’s the central pairing of Chris Pine and Zachary Quinto that remains the beating heart of Abrams’ series.

If the first film occasionally felt like a Muppet Babies version of Star Trek, the second is more mature and – as the title suggests – darker. Possibly due to the influence of long-time Abrams collaborator Damon Lindelof, the Prometheus scribe who comes onboard as co-writer with the returning Orci and Kurtzman, the threat level is more palpable, the conflicts more personal. The characters are older and wiser too (some more so than others) and to that end it is remarkable how much the cast have grown into their respective skins. Karl Urban as the Enterprise’s resident physician “Bones” McCoy and Simon Pegg as its excitable engineer Scotty are particularly good. But it’s Pine and Quinto whose stormy onscreen bromance once again provides the emotional hook, reminding us why these iconic protagonists have endured for so long.

Conversely, it’s a shame that Zoe Saldana is given so little to do here, especially considering her rise to ass-kicking prominence in James Cameron’s Avatar. Sadly Uhura’s main contribution is to bicker with Spock; bar one uncharacteristically impassioned monologue their relationship troubles are played for laughs, the running gag being that Vulcans are hardwired to suppress their strongest emotions. New recruit Alice Eve (as Dr Carol Marcus) initially looks poised to usurp Uhura as the film’s dominant female force, but her impact diminishes over the course of the film’s two-hour-plus runtime. Effectively she’s the eye candy. But then Star Trek always was something of a boys’ fantasy.

As a refreshing counterpoint to the Christopher Nolan school of clinical sci-fi auteurism, Into Darkness is an accessible, intertextually rich and above all immensely fun addition to a franchise. There’s a self-awareness to its sense of humour, a candour to its wit. Whether it’s Bones firing off another elaborate metaphor or Scotty spitting a familiar catchphrase, nods to the original series are met with rib-nudging affection as much by the other characters as the audience.

Yet anyone still hoping for a more radical reinvention will be left drifting hopelessly through outer space. Abrams has succeeded in updating Star Trek for a 21st century crowd while keeping hardcore fans happy, but expectations were lower before and his failure to raise the bar second time round suggests he’s lost sight of the series’ original mission statement. Is Abrams a victim of his films’ success? Maybe so. Considering the talent and budget at his disposal though, you’ve got to say he’s guilty of playing it safe.

JJ Abrams can do no wrong.

A solid but infrequently spectacular addition to a rejuvenated franchise.

Will this newest crew ever hit warp speed again? 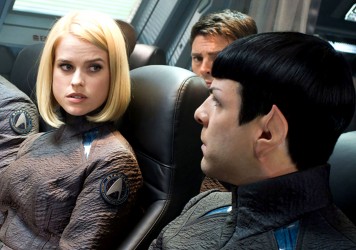 JJ Abrams’ franchise reboot is the most purely enjoyable blockbuster of the summer.