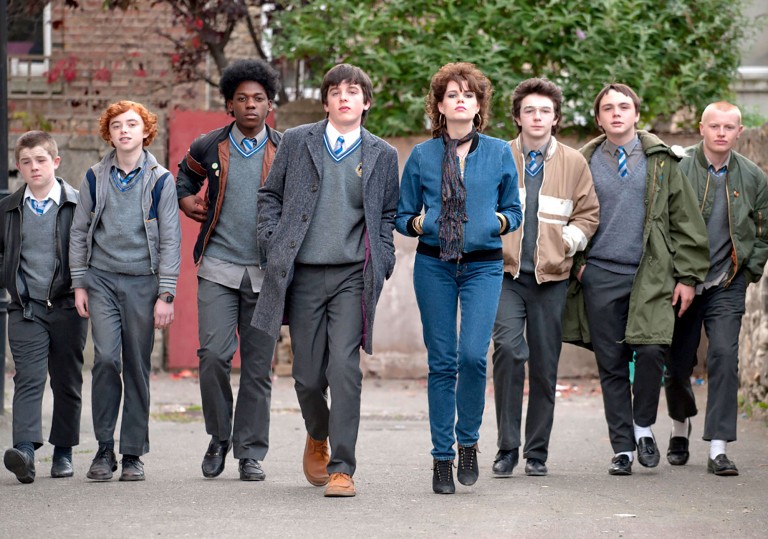 John Carney’s latest has been acquiring super fans on the festival circuit.

It’s a jolly old romp, but nothing more or nothing less than that.

Like a tie-in soundtrack album in search of a movie.

If Bratpack deity John Hughes were alive today, you could well imagine him making a film like Sing Street, a jolly if ineffectual growing pains comedy that’s liberally festooned with electro-pop chart toppers and silly jokes. Such as it is, we’ll have to make do with this version by John Carney, the director who went nuclear after his hushed busking drama, Once, captured the heart of a nation back in 2007.

Set in Dublin during the 1980s, at a time when anyone with even a scintilla of ambition or creativity had their sights set on moving to London, the film follows gawky schoolboy Cosmo (Ferdia Walsh-Peelo) as he decides to start a band. The sole purpose of his endeavour is to steal a kiss from the gorgeous wannabe-model, Raphina (Lucy Boynton), who loiters seductively on the steps of the house opposite his school gates.

And that’s pretty much it. Carney ladles on the fond period details, back-tracked with a selection of toe-tapping ditties, and merely allows the story to go exactly where you expect it to go after about the first 10 minutes. It’s a shame that Carney always shoots for the ironic or nostalgic laugh, seldom using the time and setting to actually say things about the characters. A scene in which Cosmo and his layabout muso brother Brendan (Jack Reynor) rhapsodise about the promo for Duran Duran’s ‘Rio’ as it plays on TV is merely a chance to snicker at the white bread fancy boys in their penny loafers and shark-skin suits.

The film’s best moment is a brilliant throw-away gag which unduly makes a very minor character one of the most rounded and interesting. Cosmo’s band have to rehearse in the front room of his multi-instrumentalist pal Eamon (Mark McKenna), whose father is seldom home. As the band belt out another of their sickeningly melodic party bangers, we cut away to Eamon’s mother sat on her bed, beaming at her son’s ingenuity while revving up a vibrator. The tragedy of her sexual loneliness and the odd relationship she has with both son and husband is only allowed to register for a split second, but it’s enough to imbue this character with a vibrant personal and emotional history.

Elsewhere, Carney struggles to beef up the side players: Cosmo’s bickering parents, played by two greats – Aidan Gillen and Maria Doyle Kennedy – are flickering shadows rather than fleshed-out beings. An increasingly fraught domestic situation appears to have no bearing on anyone, as Brendan continues to mope and Cosmo’s band goes from strength to strength as family ties slowly disintegrate. The general air of levity is occasionally punctured with the odd, awkward deviation into child molesting priests and the social prison of poverty.

But a rebellious, can-do spirit appears to be all that’s needed to save the day. The fun, musically-driven first half gives way to less interesting teen canoodling, all before we arrive at rather a sappy, air-punching climax. It’s all good, clean fun, but maybe a little too good and too clean. Plus, it’s hard to get over the fact that quite a lot of the music sounds like icky X-Factor cast-offs.

John Carney’s latest has been acquiring super fans on the festival circuit.

It’s a jolly old romp, but nothing more or nothing less than that.

Like a tie-in soundtrack album in search of a movie.