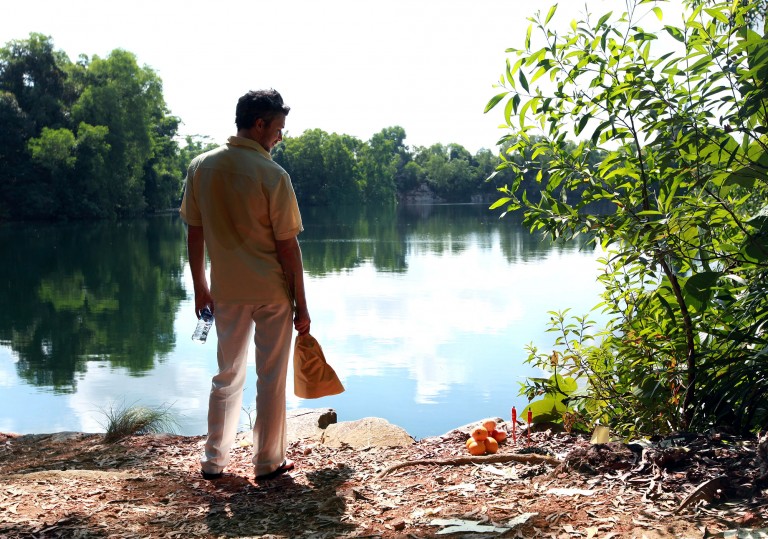 The husband-wife team behind the arty 2008 whatsit, Helen.

If Joe Lawlor and Christine Molloy’s 2008 film, Helen, was their somnambulic homage to Michelangelo Antonioni’s swinging mime-tennis classic, Blow-Up, then their remarkable, Lynchian noir-tinged follow-up, Mister John, could be seen as a cool appropriation of Antonioni’s The Passenger. It’s a film which traces the tip-toed steps of a man who is given the very real opportunity of slinking into the shoes of someone close to him who has died.

Stories in which characters switch identities in order to experience the lives of others are usually riven with conceited provisos, highfalutin existential waffle and hackneyed inevitabilities (will they get caught?!). But with Mister John, Lawlor and Molloy have somehow managed to transform this combustible blueprint into something that’s hauntingly, tragically realistic and bizarrely funny to boot.

It begins with a corpse, floating face-down in a lake. We’re told it’s the brother of Gerry (Aidan Gillen) who must immediately jet off from London to an unnamed Asian locale (Mister John was filmed in Singapore) in order to be there for his family. Gerry’s motivations for taking this trip appear benign enough; the logistics of the tragedy require a personal presence. Yet as soon as he arrives, he’s ushered down some strange psychological byways. He treats this enforced, exotic soujourn as a chance to start anew, to hastily rectify the deficiencies of his own chronically banal and sexually frustrated existence back home and a chance for him to act as heir to his brother’s impulsive and occasionally dangerous lifestyle.

From that description, it would seem a fairly easy task to join the debauched narrative dots as we observe a man defiantly rejecting cosy bourgeois politesse and allowing vice and depravity to reign supreme. But Mister John is not that film. Lawlor and Molloy have recognised the rich dramatic potential of having a man desperately attempting to stick to his ingrained puritan spirit as he is beckoned, coquettishly, to take a walk on the wild side. Even the effects of a shock snake bite appear to mock Gerry’s latent desire to play away from his wife. While it might have been far easier for them to film a daisy-chain of squalid Eastern iniquity, their choice to take the tough route of extreme inner turmoil has yielded extraordinarily emotional results.

Now some may call bullshit on the following statement, but Gillen is a performer who’s never quite reached his true potential on screen. This despite a number of charismatic supporting turns in popular TV serials (Game of Thrones, The Wire) and homegrown dramas (The Low Down, Treacle Jr). His work in Mister John, however, is far and away his strongest to date, an inverted powerhouse of brooding tough guy bravado, a tangle of jittery, barely-hidden neuroses that prevent him from putting his libido into any kind of hard action.

As a character, Gerry is not an avenging angel or sexual messiah. Cinema is a medium in which audiences are habitually calibrated to cheer the conqueror and punish the pathetic, and on those terms, Gerry sits at an intriguing impasse. It’s as if Lawlor and Molloy are content to enquire deeper into this frail human psyche than merely paint Gerry as a loveable rogue or tainted drifter. The binary concept of good and evil has been entirely excised from this film. The harsh strains of reality, though, haven’t.

The husband-wife team behind the arty 2008 whatsit, Helen.