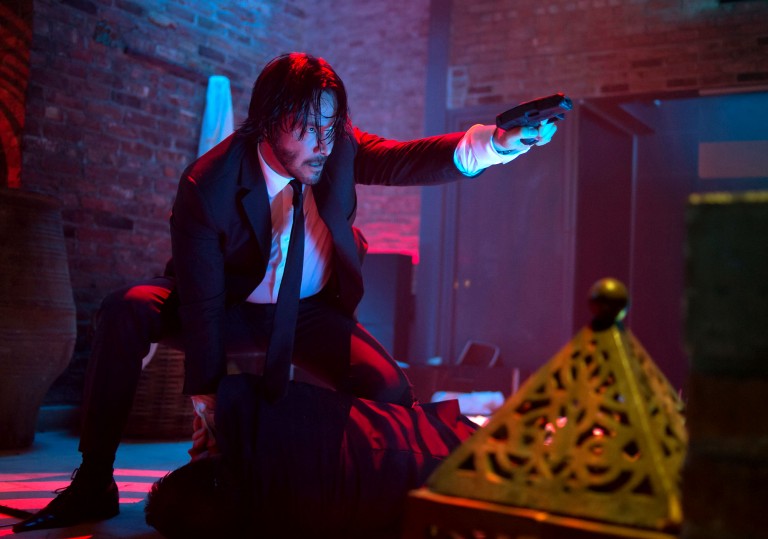 The word has been strong on this one.

Occasional bagginess is redeemed by the best fight scenes in recent memory.

Lingers for days afterward because of the care put into each step of the story and each action set piece.

Even those who encountered positive notices during John Wick’s US run can be justified in their skeptical. Notwithstanding how awful Keanu Reeves’ track record has been in recent years, the prospect of a hitman-seeking-revenge thriller directed by two stuntmen-cum-directors and written by someone whose only prior credits are tossed-off TV actioners is hardly “bright”.

Sometimes, though, the consensus is spot-on. With its cut-to-the-bone visual style and derring-do to introduce an alternate universe (in which various high-concept edges are sanded-down into simple procedures), John Wick is probably the closest any action film has come to marrying Bresson and Bioshock. Better yet that it can show a bit of humility, too.

Derek Kolstad’s script finds this seemingly impossible middle ground by starting with only the most essentially, readily identifiable pieces of character-building: John Wick, in the midst of grieving over his wife’s death, is given a new lease on life with the arrival of a beagle bought by the spouse during her dying days. When that cute dog is killed by a pack of Russian toughs, the mysterious man at John Wick’s centre – “The one you sent to kill the fucking boogeyman,” according to former comrade Viggo Tarasov (Michael Nyqvist) – begins waging war on his aggressors.

This loss of serenity becomes a fuel for anger in the action-heavy remainder, though each is imbued with the same palpable sense of compositional care. As if they’d determined tightly shot, quickly cut hand-to-hand fight scenes a prime example of what not to do, directors Chad Stahelski and David Leitch stage each of the film’s many battles with respect for their performers. It’s one thing to build a tense and lengthy life-or-death fight on the question of who can push a knife the hardest, or to have your lead blitz through a music-blaring club while wiping out a small army of aggressors.

It’s quite another to give these sequences some breathing room – most shots last for several seconds at a time, capturing multiple swift actions in any given frame – and a chance to be built toward, anticipated, and justified. The villains’ dialogue isn’t a pleasure because it’s delivered by remotely compelling characters, but because so much is devoted solely to explaining Wick’s terrifying abilities. Genuine laughs are earned once it’s clear that death at his hands is more of an inevitability than a defeat.

Better to rely on exposition here than in any explication of its sci-fi world, which confidently sidesteps certain logical gaps – from where do the hitmen’s specialised currency and personal hotel come from? – by embedding conceits into the action with quiet confidence. One of the few things John Wick shares with films of its ilk is an unfortunate tendency to go on somewhat long, yet it’s in service of something rare: an understanding of the character’s desire for closure. We could use many more efforts of this stripe.

The word has been strong on this one.

Occasional bagginess is redeemed by the best fight scenes in recent memory.

Lingers for days afterward because of the care put into each step of the story and each action set piece.