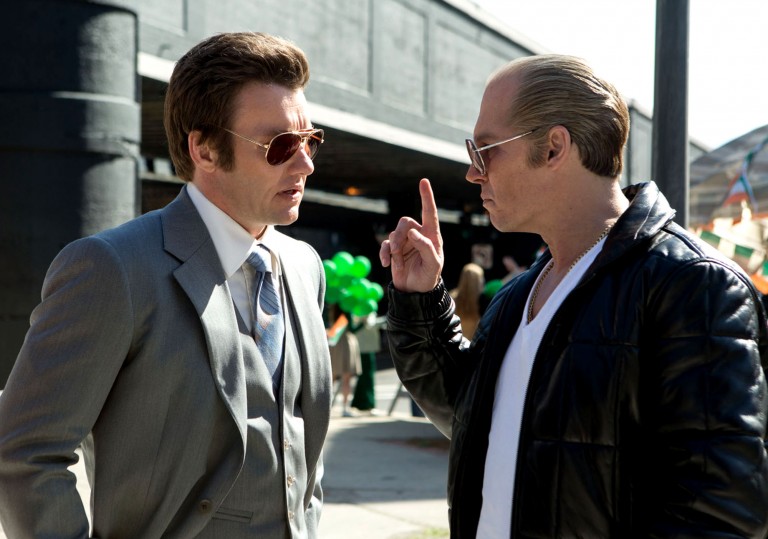 Is this the good Johnny Depp movie we’ve been promised for so long?

A compendium of dull gangster shenanigans which shirks hard reality at ever turn.

James “Whitey” Bulger began his criminal career at the tender age of 14, when he was arrested and charged with larceny; Black Mass, Scott Cooper’s stultifyingly anaemic biopic, begins in 1975, well after the time he served in Alcatraz. We know that the film is set (and was, commendably, shot) in Boston, because the word “Southie” (Bulger’s neighbourhood terrain) is said approximately as many times as “fuck” is in The Big Lebowski – the film generally takes similarly clunky pains to convince us of its veracity.

And yet this is clearly a film that is making generic, unconvincing guesses about its subject and milieu. A very pertinent example: Whitey’s one son died in 1973, but the film bumps the date up to the late ’70s, at some unspecified point (Black Mass is fuzzy on the exact progression of time, among other things) after the opening “1975” card. The collective voiceover (the tell-don’t-show screenplay is credited to Jez Butterworth and Mark Mallouk), sourced from various former criminal associates turning informants to the FBI, explicitly attributes an increase in Whitey’s ambition and sheer violence to this death, but such chronological scrambling is demonstrably a screenwriter’s lazy convenience.

This penchant for easy psychologising is especially bothersome because Black Mass reduces the exact details of Whitey’s operations to a few lines about all the rackets he ran and very little demonstration of what that amounted to; the criminal operation’s particulars are of no interest to the filmmakers. Despite its lack of specificity, the film has (still!) been heavily criticised for its remaining lack of accuracy by, among others, Kevin Weeks, a former associate whose testimony at the beginning of the film (delivered by a glowering Jesse Plemons) structures the narrative.

Weeks has numerous criticisms of particular details and general wrong-headed characterisation (the mobsters didn’t endlessly swear at each other, as they reflexively do here), but it doesn’t take a criminal record to sense that this is a film made by people guessing about the facts rather than really understanding them.

Scott Cooper’s staggeringly dull film is first a showcase for Johnny Depp. Bald and beady-eyed, Depp delivers a showily unshowy performance: his Whitey is lacking in charisma, a moody sulker with an itchy trigger finger. Depp is actually fine and convincing, but the film wants to make him as black-hole uninteresting as possible and succeeds in this dubious task. The main narrative arc is his relationship with FBI agent John Connolly (Joel Edgerton) in a mutual back-scratching deal whereby Bulger’s information about the Italian mob secured his ability to run amuck.

This, predictably, did not end well – here, again, the film is very fuzzy on the bigger picture context on the FBI’s side. Its ill-fitting portentousness is created through a tiny visual vocabulary and grimly predictable plot choices. Cooper’s signature move is to slowly draw the camera backwards after particularly momentous kills or tragedies, to underline the importance of the moment; with seemingly no other ideas, he repeats this gesture throughout, which sums up the unsurprising two hours as a whole.

Is this the good Johnny Depp movie we’ve been promised for so long?

A compendium of dull gangster shenanigans which shirks hard reality at ever turn.