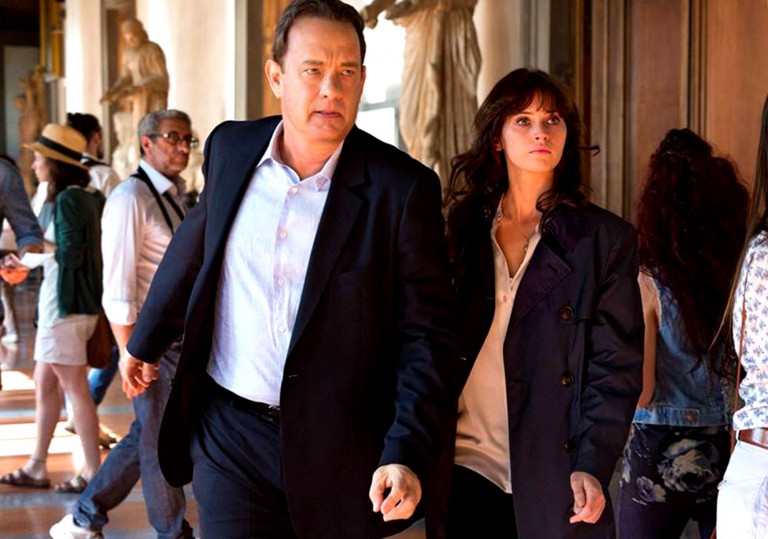 It couldn’t possibly be worse than Angels and Demons?

If you find any redeeming features here, do let us know.

Epically stupid faux intellectual Euro sleuthing, with Tom Hanks reprising his role as the dullest character of his career.

It’s people, running. And then stopping. And then talking. And then they run somewhere else. And then they talk some more. And then… Then, they run. It makes National Treasure look like a nuanced work of radical narrative sophistication. If you excised all the shots of people running in Ron Howard’s Inferno, the film’s entire run time would amount to roughly four minutes. If there’s ever any doubt, or there’s even the mildest inkling that a scene needs a swift kick up the derriere, the characters instantly remember that they need to run somewhere.

What’s most galling about a film which contains so much running is that it’s all filmed in the most boring way imaginable: fast cut medium shots and little-to-no variation. There’s also no sense of geography, with Tom Hanks’ world famous cryptographer Robert Langdon seemingly able to teleport between locations. One minute he and child prodigy, Dante scholar and medical whizz Sienna Brooks (Felicity Jones) will be making a mad dash through an ornamental garden. The next, they’ll be seen poking out of a doorway and entering into a plush gallery. It’s not that we need to be shown exactly how they get from one place to the next, but there are surely simple staging techniques which help to communicate where people are in relation to other people and places. Drama? Anyone?

Run, run, run, run, run, run, run, run… What is Hanks doing in this? This is totally beneath him. He’s a fine actor, one you draft in when you need the screen filled floor to ceiling with natural charisma, and his character here offers no opportunity for that. He’s too busy running, or spouting Wiki bombs while standing in various European tourist hotspots. But as sure as Dan Brown is punching out tawdry potboilers, Hanks will be required to get his running shoes on. Robert Langdon is an awful dullard. You can imagine him being a real stick-in-the-mud at faculty meetings, or the kind of pompous ass you’d go out of your way to avoid inviting to a drinks soiree. You’re trying to have a light chat about Bake Off, and he’s blathering on about Botticelli.

But back to the running for a moment. The running in Inferno is all at the service of saving the world from a new plague that will infect 95 per cent of the population in six to seven days. To be frank, the pair don’t run with an urgency reflective of that situation. It’s more of a workhorse canter than a desperate sprint. And neither get out of breath. When their running stint comes to an end and they’ve sneakily evaded their captors once more (blasted secret doors every time!), they launch directly into their join-the-dots art critique sleuthing. No clutching of the chest. No sipping water. No human factor. This is unfiltered, dizzy-headed tedium based on material riven with plot holes the size of a luxury hotel in Dubai. But if you like seeing people run…

It couldn’t possibly be worse than Angels and Demons?

If you find any redeeming features here, do let us know.