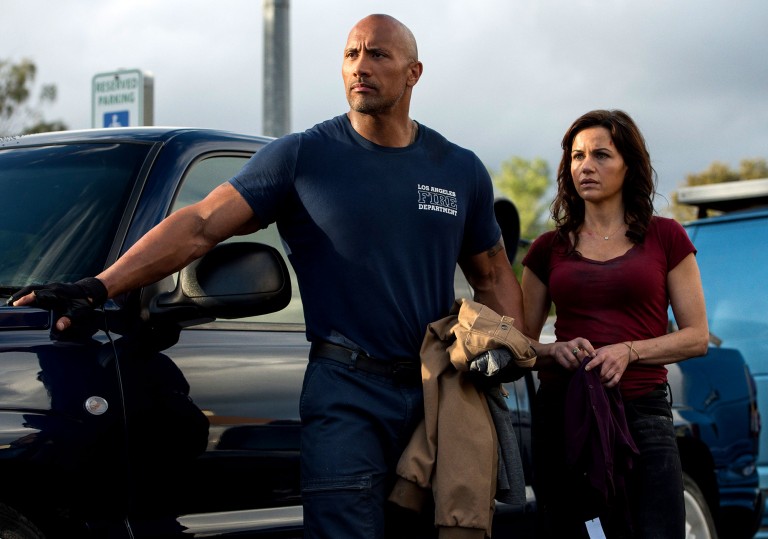 We’ll happily give a disaster movie starring The Rock a go.

Hard to ignore its faults.

There aren’t many celebrities worth following on Instagram. Dwayne Johnson (@therock) is one of them. From setting obscure world records (loves a selfie does our Dwayne) to giving motivational pep talks at the gym to showing some love to his adoring fans across the globe, his feed serves as a daily reminder of the qualities that have transformed the former WWE wrestling champ into a bonafide top-billed movie star. More than anything, though, Johnson always appears to be having a great time, as if in that exact moment there’s nothing he’d rather be doing, nowhere he’d rather be.

Which brings us on to the yawning fun vacuum that is San Andreas. It’s not that Johnson’s chiselled charisma and infectious enthusiasm doesn’t translate from social media to the silver screen (s/o Michael Bay’s criminally misunderstood Pain & Gain), more that these winning traits are surplus to requirements in director Brad Peyton’s disaster porn epic. Here, the actors’ primary function is to service the action, the characters mere conduits for the largely expositional, jargon-heavy dialogue that connects each contrived plot point like needle strokes on a seismograph. It’s mass destruction for mass consumption, cheap thrills for demolition perverts, and it’s crushingly dull.

Guiding us through the chaos and confusion are Ray “just doing my job ma’am” Gaines (Johnson), a helicopter pilot in the Los Angeles Fire Department, and Lawrence (Paul Giamatti), a surly-solemn Caltech prof who wears the permanent look of a man who’s aggrieved at being refused entry to his local Wetherspoons despite the fact he’s clearly still drunk from the night before and it happening to be Christmas Day. Though their paths never directly crossed, these men share plenty of common ground. Both are recently bereaved, both are in the business of saving lives and both thrive in high-risk situations – in this case the whole of California comes under threat when a massive quake at the Hoover Dam triggers a chain reaction along the eponymous fault-line.

For Lawrence, this means gawping in horror at various charts and computer monitors which seem to be displaying the results of a particularly intense spirograph session and making insightful observations such as “this is really bad” and “oh, shit!” while offering his best layman’s definition of a “swarm event”. For Ray, it’s about doing what needs to be done in order to rescue his soon-to-be ex-wife Emma (Carla Gugino) and daughter Blake (Alexandra Daddario), who have recently moved in with a shitbag property magnate named Daniel Riddick, played with spineless zeal by Ioan Gruffudd.

Despite his decorated service history and the fact he looks like he’s just eaten an entire bison for breakfast, Ray is presented as the kind of everyday hero you might unwittingly pass on the street one minute only to be dragged from a pile of smoking rubble by the next. An all-action, all-American family man who’s simply in the wrong place at the right time. But Johnson is no John McClane, and San Andreas is no Die Hard. (For starters it’s surprisingly light on comic relief – unless you happen to be a sucker for baseball-themed innuendo.) This is brash, po-faced spectacle cinema of tectonic proportions, a titanic Hercules vs Mother Nature clash in which any hint of authentic human drama is smothered by wave after wave of CG-driven aftershocks.

When the dust eventually settles and the setpiece stacking subsides – Los Angeles levelled, the Bay Area obliterated, our faith in Hollywood’s ability to produce original tentpole titles in ruins – Peyton signs off with an unabashed salute to the brave men and women of America’s emergency medical services. It’s a moment of shameless grandstanding masquerading as chest-thumping patriotism that would be ripe for parody had Team America not already got there a decade ago. In pure blockbuster terms, San Andreas raises the bar through the sheer scale of the havoc it wreaks, but amid all the toppling skyscrapers and tidal waves it becomes almost impossible to pinpoint the film’s emotional epicentre.

We’ll happily give a disaster movie starring The Rock a go.

Hard to ignore its faults.