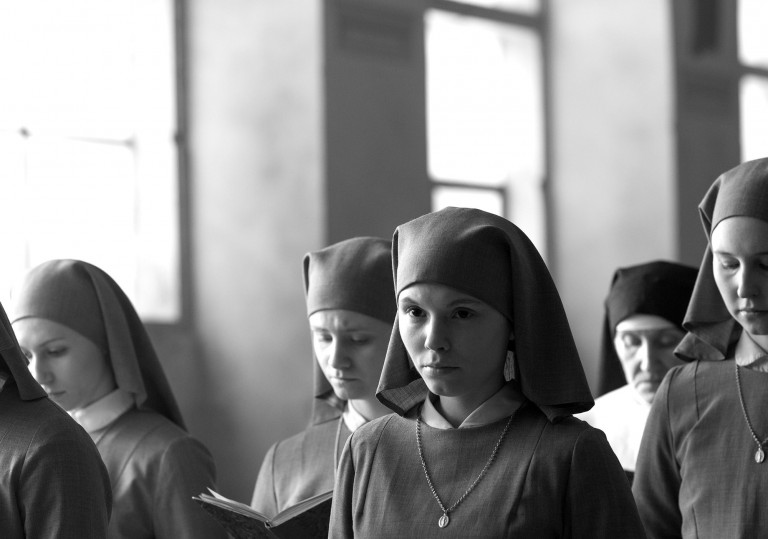 Nothing but positive festival buzz.

Faith and sin reside in the same striking, stark frame.

Powerfully lingers in the mind thanks to its treatment of trauma, reconciliation and iron will.

Earth appears slightly off its axis in Pawel Pawlikowski’s Ida. Skylines and ceilings are massive, extending the distance between man and God. The human body is often relegated to the bottom of each image, giving many of the black-and-white compositions a suffocating appeal. It’s common to find faces split down the middle by the edges of the frame, stressing the endless pull of off-screen space. One might think such jarring mise-en-scéne would inspire a sense of menace, but instead Pawlikowski’s aesthetic is primed to consider the often-rocky relationship between world conflict and heavenly grace.

For a film dealing with heavy material such as trauma, community repression and the longstanding horrors of the Holocaust, Ida unfolds in surprisingly quiet fashion. The early moments contain very little dialogue, but each glance carries weight, each action a sense of purpose. Anna (Agata Trzebuchowska) and her fellow novitiate nuns go about their daily routine at a convent in the Polish countryside without saying a word. Before taking her final vows, Anna’s mother superior suggests she visit her last living relative in the city. Pawlikowski handles the transition almost like an afterthought, but like every small shift in Ida, the subtleties matter.

Set during the early 1960s, Ida is very much a film about looking back and addressing the generational pain caused by World War Two. Up to this point, Anna has avoided dealing with the past, but that changes when she meets her aunt Wanda (Agata Kulesza), an alcoholic court judge who has spent the better part of two decades sentencing German sympathisers to prison or death. During her time with Wanda, Anna discovers that she is Jewish and that Ida is her given name. The two women eventually travel to the small town where their family members were murdered during the war with the hopes of finding closure. Instead, they discover a lingering undercurrent of anti-Semitism.

In this sense, Ida is story of ghosts and the people trying to quiet their cries. Wanda’s persistence stems from longstanding grief and an inability to let go of the past. Her family tree has been nearly wiped out and she recruits Anna to be a part of one last attempt to reclaim a sense of identity. This reunion also provides Pawlikowski the opportunity to juxtapose two very different ideologies. “Do you have sinful thoughts?,” the sexually active Wanda asks her devout niece. Anna replies in the affirmative, spending the rest of the film grappling with the complexity of her answer.

There are echoes of Bergman and Wenders to the film’s measured pacing, minimalist design and religious undertones, yet no real auteurist comparison does the film justice. Pawlikowksi has crafted a uniquely spartan film that charts the ripple effect of history on the everyday person, proving that secrets can be repressed only for so long. The film also suggests that faith and sin can exist in the same moment without shame or judgment. Reducing life to one or the other feels like a cheat.

Nothing but positive festival buzz.

Faith and sin reside in the same striking, stark frame.

Powerfully lingers in the mind thanks to its treatment of trauma, reconciliation and iron will.