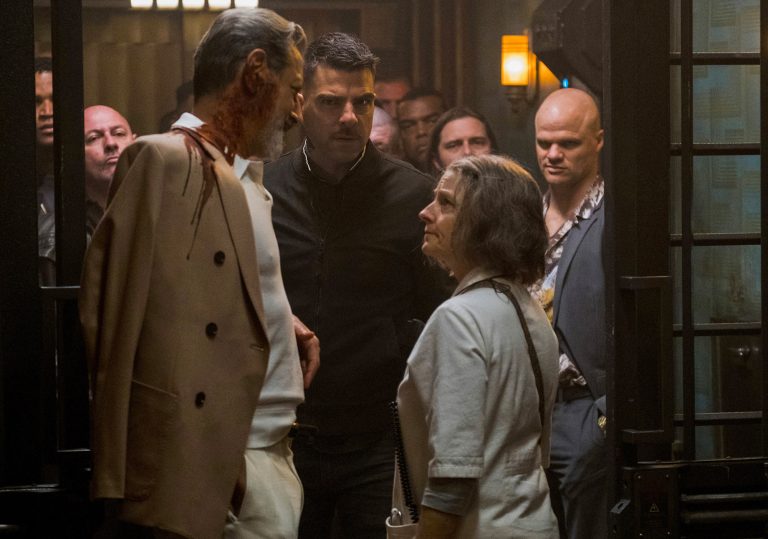 Non-sensical and over the top, and that’s just Charlie Day’s performance.

There’s still something charming about Hotel Artemis, despite its many, many flaws.

Set in a dystopian vision of Los Angeles in 2028, the titular building is a members-only hospital for criminals, run by Jean Thomas (Foster), an agoraphobic nurse with a bag of tricks and some sensible shoes. She’s assisted by Everest, a towering orderly played by gentle giant Bautista, and with riots over clean water raging in the city, the Artemis gears up for a busy night.

Residents at the hospital are known by code names assigned by room – assassin Nice (Boutella) and arms dealer Acopouco (Day) are soon joined by Waikiki (Brown) and his brother Honolulu (Bryan Tyree Henry) who arrive following a botched bank robbery. With the mysterious ‘Wolf King of LA’ soon to arrive, tensions begin to rise and tempers begin to fray, taking cues from Murder on the Orient Express and David Leitch’s stylistically similar John Wick films and Atomic Blonde.

Running at a lean 93 minutes, writer/director Pearce has his work cut out to weave together a whole host of storylines and bombastic personalities. Subplots melt away into nothing like snow on a sunny day, while the dialogue fluctuates wildly from ‘clunky exposition’ to ‘amusingly outlandish’. There’s a huge amount of silliness about Hotel Artemis, which is perhaps best exemplified by its obsessive references to 3D printing and ‘nanites’ – but there’s still something charming about it, which can only be attributed to the hugely charismatic cast Pearce has managed to assemble.

Foster (in her first film role for five years) is world-weary but sweet, a little vulnerable in her sensible shoes and scrubs, and teamed with Dave Bautista, they make for a lovely odd couple. In an early scene, Everest, full of concern for his boss, asks Jean if she’s been listening to the anti-anxiety cassette he bought her. Like a softer spoken version of his WWE colleague Dwayne Johnson, Bautista earnestly buys into his role, and provides most of the film’s funnier moments. Charlie Day (essentially playing the same role as he did in Pacific Rim Uprising) is a cut-price Joe Pesci; Jeff Goldblum plays Jeff Goldblum for approximately three minutes; and Sofia Boutella once again turns up as a mysterious femme fatal. Sterling K Brown, meanwhile, seems confused by his own presence on the set.

This flashy, violent attempt at genre-bending has a neat concept, and the film’s trailer suggests some sort of linear plot, but the film itself has a script crammed tight with too many ideas and too many characters to be corralled into coherence. Verging on entering so-bad-it’s-kinda-good territory, Hotel Artemis is a lesson in how not to edit a script, but it’s a fine jaunt if you’re in the market for some cheap thrills and bizarre non-sequiturs.

Non-sensical and over the top, and that’s just Charlie Day’s performance.

There’s still something charming about Hotel Artemis, despite its many, many flaws.