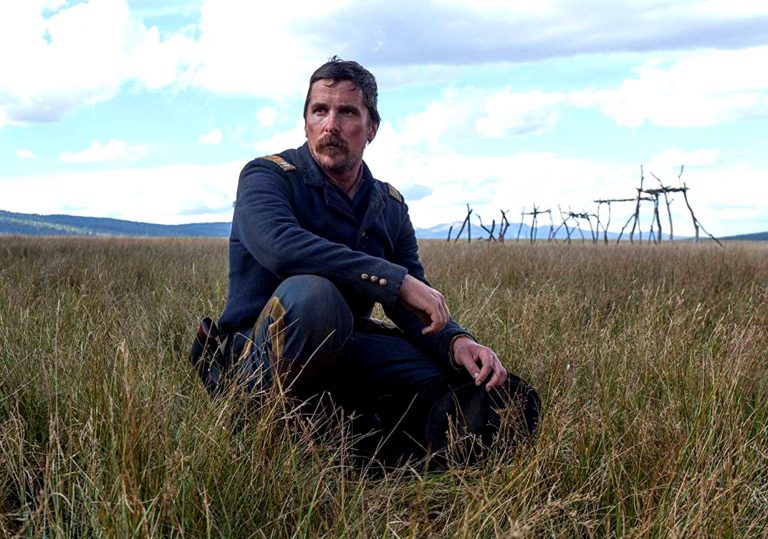 The Bale/Cooper creative powerhouse partnership has never really worked out.

Bale hogs the screen, but Rosamund Pike gets a few hard acting jabs in too.

There’s serious, there’s highly serious, there’s I’m scared to be in the same room as that guy over there picking a fight with a vending machine, there’s unmarried tax officer, and then there’s Christian Bale in Scott Cooper’s Hostiles. If nothing else, you can’t help but admire the fact that Bale wholly inhabits each role he accepts, physically relishing the romantic concept of movie acting as a type of psychological home away from home.

He is an actor for whom there must be motion in stillness, where he has to make the viewer aware that his mind is skipping over and that thoughts are being processed. And he’s reached that point where he’s not thinking how he should act, or what his next line is, or how long that pause should be, but he’s leached the actual thought patterns of the fictional form he inhabits.

Watching him work is at once awe-inspiring and infuriating, as he strives for a realness that is almost too real. There’s a poetic banality that’s anathema to Bale’s style, one which he did manage to capture as a lovelorn comedy writer Rick in Terrence Malick’s majestic Knight of Cups.

In Hostiles, he’s on the screen for barely five minutes before his patina of cool is shattered and he’s chewing out a colleague while interrupting himself to demand the tyrant wipe that smile off his faces. As Captain Joseph Blocker, cavalry man for the US army and state-sanctioned slaughterer of Native Americans, he’s seen some dark shit that no pince-nez-wearing quill-pusher could ever hope to fathom. Having been ordered by Uncle Sam to escort a small band of handily benign Cheyenne back to their sacred Montana homestead, he exits the bunkhouse to let out a silent scream during the magic hour.

While the immaculately coiffured bureaucracy might not comprehend the gravity of their humiliating demand, Rosalie Quaid (Rosamund Pike) surely does. The film opens as she’s home schooling her beloved brood on the subject of portentous adverbs, and within a flash, a hoard of Comanche warriors mosey on up with murder colouring their dead eyes. Patriarch scalped and daughters slotted, Rosalie quick-steps it to the nearby brush where she manages to evade her potential killers. But she doesn’t manage to evade the crippling emotional turmoil that comes from witnessing your entire family dispatched on the plain. Bale’s Blocker picks up the mad-eyed Rosalie and she joins his small wrecking crew, and from thence the journey proper begins.

This handsome, deadeningly earnest, ’90s-style oater shoots for (and hits) the target of galaxy-toppling high seriousness as it slowly unfurls its tale of the long, hard road to civic compassion. Though Blocker is a man who has administered his fair share of killing, it takes a close-quarters road trip to learn that, while some of the Natives may be hostile, there are others who are not hostile. In fact, they’re quite the opposite.

Cooper peppers lengthy dialogue sequences with sharp, violent interludes in which death is framed as sudden and undramatic. Pike is decent as a plucky female foil, but there’s never any doubt that this is first and foremost the Christian Bale Agony Hour, and he’s consistently favoured in terms of plot, screen time and character detail. There’s probably more footage of his palpitating cheek muscles than there is of the female lead. Just as the maestro himself performs in a manner which lightly perverts a sense of realism, the film itself draws on classic Hollywood tradition while smuggling a contemporary manta preaching peace, love and understanding. It’s probably more an elegiac drama in the vein of Dances with Wolves than it is a distant relative of John Ford’s The Searchers.

Looping back to Terrence Malick, it’s worth adding that the great young actor Timothée Chalamet has a role in Hostiles, though it’s not dissimilar to that of Jared Leto’s in The Thin Red Line. Eep!

The Bale/Cooper creative powerhouse partnership has never really worked out.

Bale hogs the screen, but Rosamund Pike gets a few hard acting jabs in too.