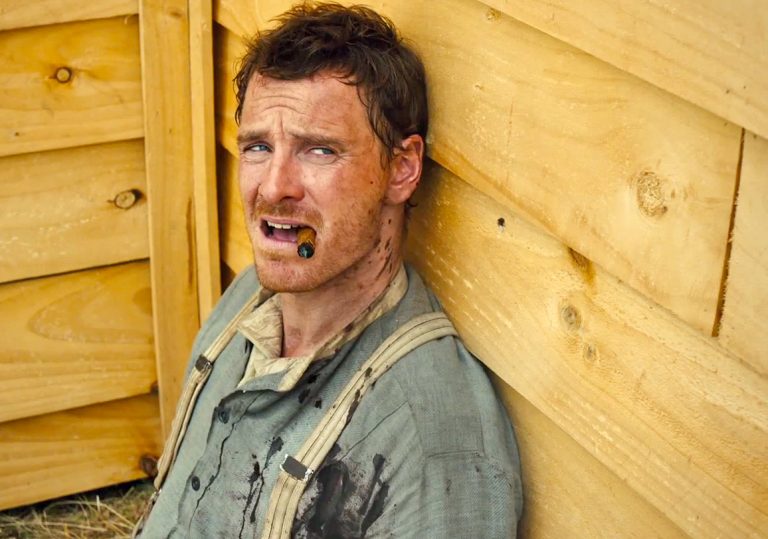 Anything with Michael Fassbender in is worth a look.

A traditionalist neo-western straight from the top-drawer.

That magical combo: a debut feature that knows exactly where it's going and leaves you wanting more.

One of the most common failings among first-time filmmakers is an inability to recognise when they’re at risk of overseasoning the dish. You see it all the time, a clunky metaphor here, a stray pop culture reference there. It’s perfectly understandable – we’re not for one second suggesting that making films is a cakewalk. But it’s true to say that not everyone succeeds in finding a healthy balance between hat-tipping and telling their own story at the first attempt. Thankfully, British writer/director John Maclean is someone who fully appreciates the dictum ‘less is more’, as evidenced by his barnstorming debut feature, Slow West, which wears its influences on its claret-flecked sleeve while managing to feel bracingly original.

This marks Maclean’s third collaboration with Michael Fassbender following his award-winning shorts, Man on a Motorcycle from 2009, and Pitch Black Heist from 2011. Here Fassbender plays Silas Selleck, a cigar-chompin’, dangerously charismatic outlaw who acts as our guide through this consummately crafted frontier western. As well as being the film’s straight-talking narrator, Silas is also chaperone to a 16-year-old traveller named Jay Cavendish (Kodi Smit-McPhee, coming of age), who has journeyed from the wind-swept highlands of Scotland to the scorched badlands of the American Midwest circa 1870 in search of his estranged soulmate, Rose (Caren Pistorius).

Trouble is, Rose and her pa have a handsome bounty on their heads, meaning every salt-lipped, shifty-eyed scoundrel in the state is also on their trail. Jay is out of his depth but optimistic, believing that his virtuous intentions will see him get the girl. Selleck, a surly, world-weary sonovagun, is compassionate enough to warn the kid not to go looking for trouble, but is happy to entertain this romantic gesture as long as he retains the upper-hand.

Another regular collaborator of Maclean’s, DoP Robbie Ryan (Fish Tank, Catch Me Daddy), makes full use of the dramatic landscape at his disposal (Slow West was primarily shot on location in New Zealand), capturing the natural splendour of the rugged Colorado prairies without resorting to filling the screen with a slideshow of stock vistas. Yet the film is at its most visually arresting when the characters venture off the beaten track.

In a bid to evade the mob of cutthroat vagrants who have begun tracking them, Silas and Jay slip away into a dense patch of sun-dappled woodland. It’s not long before the action starts up again – the threat of abrupt, Coen bros-esque violence is ever-present in Maclean’s world – but for a brief moment we are transported to a different time and place via an absinthe-laced campfire anecdote that serves as a lyrical ode to a more traditional mode of storytelling.

In the next scene, Ben Mendelsohn’s sly, swaggering villain – whose imposing bear-skin coat appears to have been borrowed from the wardrobe department of Robert Altman’s 1971 anti-western McCabe and Mrs Miller – takes advantage of an intoxicated Silas and Jay, before disappearing into the night. It’s at this point that Maclean switches focus away from the cool, hazy shelter of the woods, the subtle yet significant tonal shift in Ryan’s cinematography serving as a splash of cold water to the face after a particularly vivid fever dream. Suddenly we’re wide awake, fully cognisant of the inevitable conflict awaiting our newly bonded duo.

This is not a film that revels in nostalgia, constantly harking back to the golden age of the genre – though it must be said that Maclean does owe a small debt to the Leones, Peckinpahs and even Hillcoats that have come before him. Rather, Slow West walks its own line, embracing some of the more time-honoured western archetypes and tropes while providing enough colourful narrative diversions to throw us off the scent. Maclean hasn’t set out to make an iconic revisionist western for the ages, just a thoroughly entertaining ride across familiar terrain. A bittersweet modern ballad set to a steady, classical beat.

In pure technical terms, there is so much to admire here. But importantly it doesn’t feel like Maclean has had to raid his director’s toolkit in order to achieve the distinctive look and feel that sets his film apart from other recent neo-westerns (see Kristian Levring’s shambolic The Salvation). Clearly he’s done his research – the cinematic and historical knowledge demonstrated here lends the film an undeniable authenticity, as if the story has been plucked from the cobwebbed journal of some long-departed gunslinger. At a trim 84 minutes, Slow West is one of the most gratifyingly economic saunters into the heart of Old America you could ever hope to see. And, crucially, it feels like the work of a filmmaker who has a lot more to give.

Anything with Michael Fassbender in is worth a look.

A traditionalist neo-western straight from the top-drawer.

That magical combo: a debut feature that knows exactly where it's going and leaves you wanting more.