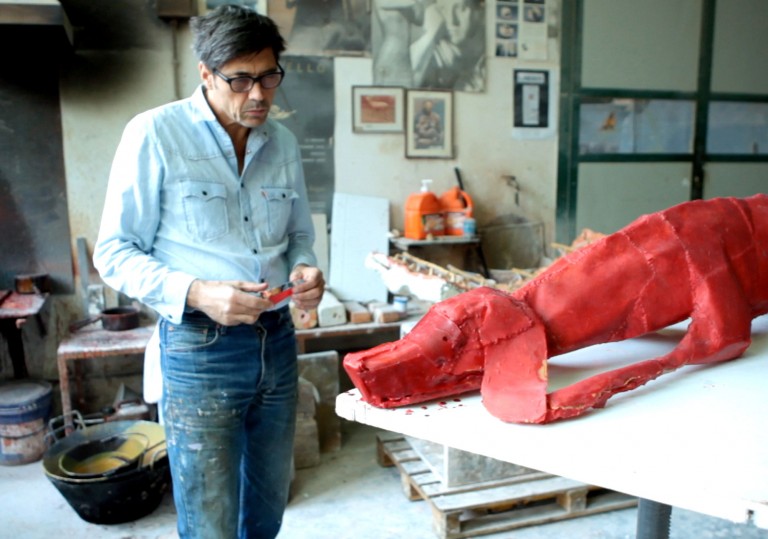 A peek inside a Milanese sculpture workshop makes for unexpectedly compelling viewing.

One to file next to such wispy, ambient documentaries as Philip Gröning’s Into Great Silence and Gideon Koppel’s Sleep Furiously, this fascinating miniature by Francesco Clerici chronicles the creation of a life-sized bronze sculpture of a dog in tired repose. The twist is that the men (and one woman, that we see) employed by the Milanese workshop at which this “event” occurs strictly abide by a production process originally devised during the 4th century BC.

Yes, there’s the odd air gun usage to remove loose debris, or a blow torch to attain a strong directional flame, but everything else is as it was. It begins with layers of red wax carefully manipulated by a sculptor into the shape of the mutt. Then an exoskeleton of plastic pipes is placed over the top and whose function only comes into play much later in the intricate procedure. A plaster casing is then produced via a series of painstaking stages, and then finally the molten bronze is slowly poured in from an old bucket.

There’s a mesmeric quality to watching these craftsman go about their intricate business, and for the first half of the film it’s entirely uncertain how this strange pink monolith they’ve produced will furnish them with a metal-based artwork. Clerici contrasts the methods we’re seeing with those contained within archive footage, sometimes even filming his subjects from identical angles to emphasise how little these techniques have altered over the ages.

And yet the film is never hectoringly nostalgic about the old ways or bothered with how such a tradition is allowed to withstand the wrecking-ball of capitalistic progress. There’s no narration, very little talking and explanatory intertitles only arrive prior to the end credits, as this is a film which celebrates a history of artisanship and memory through a single scintillating act of creation.