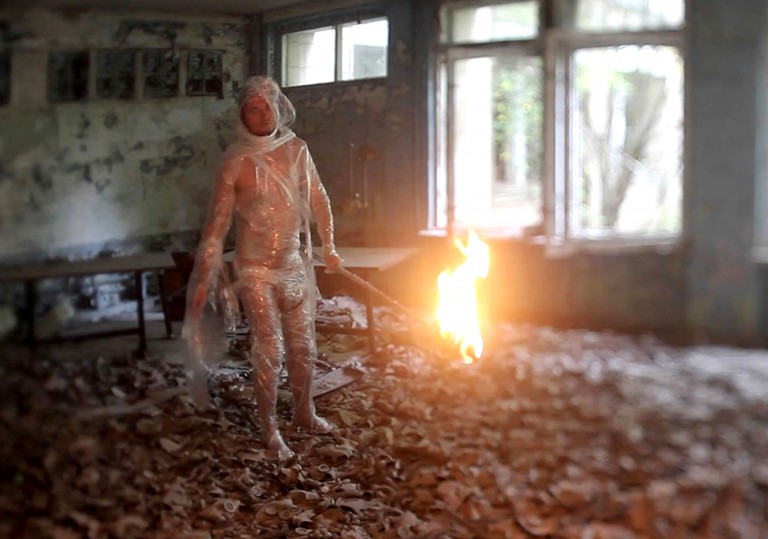 Sorry, not in the mood for a documentary about Chernobyl.

An investigative political documentary with a lion heart and a funny bone.

How to stand up for personal truth amid the danger of violent oppressors.

‘The Russian woodpecker’ was the name given to Duga-1 – a hulking silver spiderweb of a radar system that worked from 1976-1989 in Chernobyl. The radar disrupted local transmissions with a reverberating ‘tap-tap-tap’, like a mechanised woodpecker.

The transfixing infidel heart of this documentary by American Chad Gracia is an Ukrainian artist named Feder Alexandrovich. He is a theatrical poet, a knowledgable provocateur, a sad jester with a family history that includes people being shot and sent to the gulag. He was four in 1986 when the Chernobyl disaster happened. Amid the suffering and chaos, he was sent to an orphanage.

Other children told him that he would remain there forever. He believed them and has felt strange about himself ever since. This performative difference is a tonic for the eyes. At one points he stands trussed up naked in cling film, holding a flame that illuminates a decrepit classroom, carpeted entirely in children’s gas masks.

The Feder story – the hows and whys of his becoming a truth-obsessed creative – is given its dues but there are broader goals. The Russian Woodpecker is about Feder attempting to step up establishment questioning in order to link the 1986 Chernobyl catastrophe to Duga-1, and expose Soviet willingness to sacrifice human life.

Theme and tone eclipse an inelegantly jammed narrative. There are too many interviews with a slew of barely identified professionals. Letting an artist steer a political expose as opposed to, say, an investigative journalist or lawyer means a mood shaped by hands that are vulnerable and entertaining rather than slick and incisive. Our man on the frontline is not a polished tool. Feder’s fingernails are dirty and he doesn’t brush his teeth.

The most meaningful point is when he  – with his unwavering ideals forged in the fire of history – turns tail and flees.  A family is a major weak point for anyone seeking to take on a violent power and his fear is that his son will be killed by the secret police. Witnessing our hero so uncharacteristically cowed conveys the spectre of state brutality more starkly than any noble quest.

The contemporary hook and updated source of political sorrow is the upheaval that took place in early 2014 in Ukraine’s Maidan Nezalezhnosti (Independence Square). Specialised story arcs tying into theories about Chernobyl carry less power than the sight of police beating unarmed individuals and the tearful testimony of the film’s cinematographer over “the suffering of the people.”

The pay-off for more confounding moments in the film are staunch ideals that reveal themselves in little throwaway moments amid chaos. In a world in which some ruling states are armed and organised Goliaths willing to kill those that protest about them, The Russian Woodpecker’s heartfelt rebelliousness is a treasure for any David in search of a slingshot.

The film is available to watch at russianwoodpecker.com

Sorry, not in the mood for a documentary about Chernobyl.

An investigative political documentary with a lion heart and a funny bone.

How to stand up for personal truth amid the danger of violent oppressors.