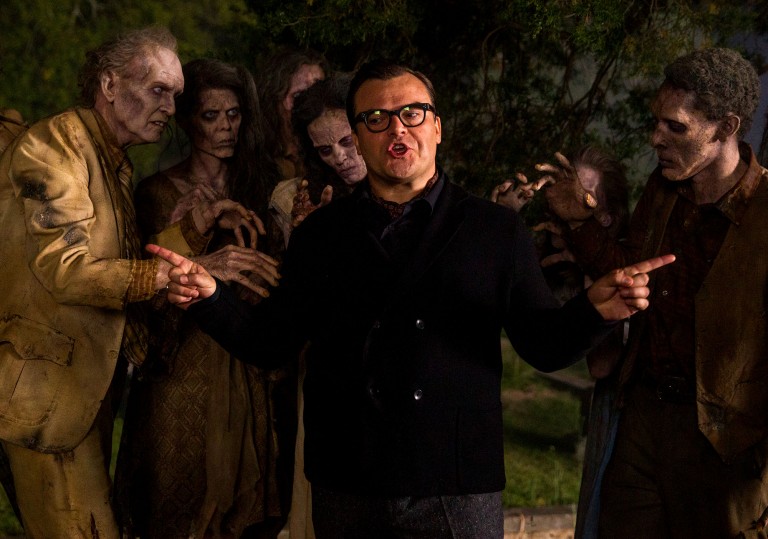 Ah, the humble pleasures of a good ’90s family film.

Goosebumps is nostalgia at its most infectious.

No one knows why a Goosebumps movie is being made in 2016. It’s a giant enigma, a nostalgic poltergeist. It’s your childhood cat that got run over, buried in your backyard and ended up crawling through your bedroom window at night like a feline Revenant. Watching a Goosebumps movie in 2016 should be such a weird, sad experience. And yet, it isn’t.

Goosebumps is a film blindly unaware of its own irrelevance. It doesn’t care that you haven’t read an RL Stine novel in 15 years, that you regularly confuse it with Are You Afraid of the Dark?, or that passing down this pop culture morsel to the little ones in your life hasn’t exactly been a top priority. Goosebumps is a drunk aunt twirling at a wedding reception: the most infectiously gleeful lack of self-awareness there is.

Such ignorance of the passing of time enables this film to infuse the revelation that Jack Black’s reclusive, curmudgeonly writer is, in fact, RL Stine with the kind of giddy awe you might reserve for the discovery that Helen Mirren is living in your basement. In the end, unbound awe seems the more profitable path to take over cynicism. Post-modern commentaries on consumerism and the media can be delicious in the right hands, taxing in others; so there’s something refreshing about a film which doesn’t attempt to communicate some vital message about what Goosebumps means today or where it sits within the wider cultural landscape.

Instead, the film’s narrative charms lie in the familiarity of its world. Goosebumps’ wants to remind you how terrified you were by Slappy the Living Dummy, and so Slappy takes centre stage as the film’s sociopathic antagonist. Sure, there are a few buzzwords – ‘twerking’, ‘Twitter’, etc – sprinkled in to reassure viewers that this is in fact a modern production and not the result of someone uncovering a dusty old film canister in the corner of the Scholastic offices.

The rest is pure ’90s – all deceased fathers, awkward teen infatuations and loud-mouthed nerds; silliness for the kids with a few clever jokes slipped under the radar for the adults (including, remarkably, a paedophilia gag). When our hero Zach (Dylan Minnette) unwittingly unleashes Stine’s creations, their escapades instantly evoke the family films of Steven Spielberg and Joe Dante. In this sense, Goosebumps reveals itself to be a film that knows exactly how to deliver simple pleasures.

Ah, the humble pleasures of a good ’90s family film.

Goosebumps is nostalgia at its most infectious.