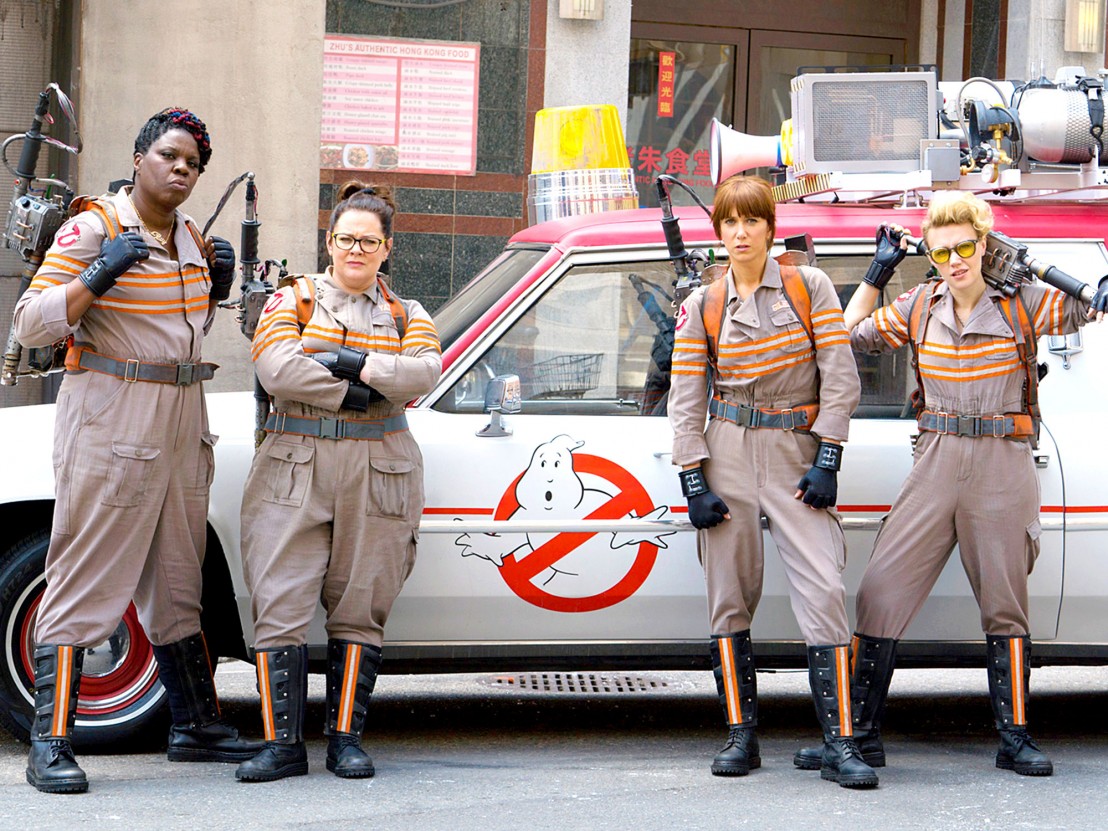 Earlier this week, director Paul Feig announced that he and screenwriter Katie Dippold are developing a new Ghostbusters movie. A third film has been mooted since the early ’90s, but it’s now been confirmed that neither Ivan Reitman, the director of the cult 1984 comedy, nor its writer-star Dan Aykroyd, will be reprising their roles. Instead, Feig will replace the original leads with a female cast. With no further details concerning the cast or storyline revealed at this stage (you just know Sigourney Weaver’s been sitting by the phone ever since Feig broke the story via his Twitter account), the question on every fan’s lips is: who they gonna call?

Here’s another, more contentious question: is this Ghostbusters reboot a good thing for women in Hollywood?

While it’s certainly refreshing to see a female-led studio comedy in the works – which, based on Feig and Dippold’s previous collaboration, the Melissa McCarthy/Sandra Bullock cop comedy The Heat, promises to be a blast – it would be premature to declare this as a victory for gender equality in the film industry. Because like it or not, the reality is that no studio operating within Hollywood’s risk-averse system would be willing to fund a project with a predominantly female cast if it didn’t come with a neatly prepackaged global fanbase. In fact, any sustained interest and subsequent financial gain generated by this new-look Ghostbusters will more than likely serve to reinforce Hollywood’s outmoded attitude towards women-fronted projects – that successful films featuring multiple female leads are contingent on slotting actresses into roles previously cultivated and inhabited by men.

In an interview with Entertainment Weekly, Feig revealed that Ghostbusters will definitively be a reboot, not a sequel: “I love origin stories. That’s my favourite thing. I love the first one so much, I don’t want to do anything to ruin the memory of that. So it just felt like, let’s just restart it because then we can have new dynamics.” This makes perfect sense, and it’s positive news in so far as Feig and Dippold will presumably be coming up with new characters, as opposed to giving the Bill Murray, Dan Aykroyd, Harold Ramis and Ernie Hudson characters we all know and love a female makeover. But it’s not the same as creating entirely original female heroes, and that’s a key distinction.

Historically, Ghostbusters is a men’s-only club, but it’s important to note that this is, and always has been, a gender neutral franchise. That is to say, not a franchise that can readily be defined in terms of its masculinity. This makes Ghostbusters ripe for a female reboot – the roles of the ‘busters shouldn’t be open exclusively to male actors because there is literally no reason why women can’t be Ghostbusters. Indeed, the decision to cast Ghostbusters with female leads is a tantalising prospect, not least because right now there are so many exceptional female comedians working in Hollywood – Melissa McCarthy, Kristen Wiig, Tina Fey, Amy Poehler and Maya Rudolph are just some of the names that have been rumoured so far; all would be excellent choices. And hey, crossing streams won’t be a problem for this new gang of parapsychologists. So what’s the problem?

Let’s be clear, there’s nothing gimmicky about the notion of a female Ghostbusters. But there is something inherently tokenistic about putting a female spin on an iconic franchise. Especially when you consider how few opportunities there are for women in original action-comedies. Bridesmaids, Feig’s hysterical directorial breakthrough from 2011, garnered huge amounts of critical and public support, backed up by a healthy box office return (although it still took considerably less at the US box office than The Hangover II). And yet action-comedies featuring female ensemble casts are few and far between. Back in October 2012, Millennium Films outlined plans for an all-female instalment in Sylvester Stallone’s Expendables franchise. If this announcement appeared to signal a sea-change, the title – ExpendaBelles – screamed novelty spin-off. In terms of progress, then, is Ghostbusters 3 another case of two steps forward, one step back?

There is a wider issue here. Put simply, there are not enough original franchises – films not adapted from a best-selling novel or comic book series – being made. Take this year’s summer blockbuster crop. Of the 10 highest-grossing summer movies of 2014 (based on worldwide gross), six were sequels, three adaptations and one a reboot. Only three of those movies passed the Bechdel test (22 Jump Street, Maleficent and Transformers: Age of Extinction), and only Maleficent featured two women in a lead role. Regardless of whether you’re looking at original franchises, sequels or reboots, the fact remains that women are more likely to be found playing stock characters (Scarlett Johansson’s leather-clad femme fatale in Captain America: The Winter Soldier, Emma Stone’s passive girl-next-door in The Amazing Spider-Man 2) than authentically progressive protagonists. Sadly, Hollywood’s idea of a top-line female ensemble in 2014 looks like this.

On a cultural level, the casting of multiple female leads in both Ghostbusters 3 and ExpendaBelles is significant, as it gives both franchises a different narrative perspective. But these films won’t necessarily create more roles for women, at least not within the rigidly male-dominated franchise format. There’s every chance we’ll see a female Dad’s Army before an original female-led tentpole movie finds its way onto a studio’s slate. A look ahead to what’s coming our way next summer and the picture becomes even more depressing – Pitch Perfect 2 is the only mainstream comedy featuring a female ensemble currently scheduled for release.

Ghostbusters may yet prove to be a step in the right direction, but if the long-term goal is ultimately equal opportunities for women across the film industry, it’s unlikely that this breed of reboot will be the catalyst for the kind of top-down mindset shift that’s required.

The first official trailer has just been released. Watch it below and let us know what you think @LWLies