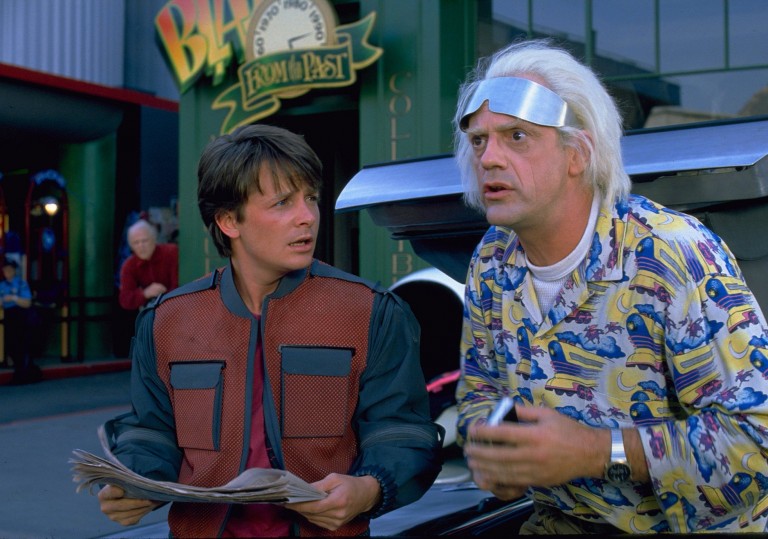 It’s always morning in America, even in the afterno-no-noon.

Like Sunny D, the memory is far superior to the reality.

As a youngster I was driven to school by a neighbour because my parents – both teachers – had to leave for work much earlier than my day officially started. The weekday regime was that we’d march out the house, head down seven doors, and then wait quietly for half-an-hour for my car pooling chauffeurs to ready themselves. Every morning we’d sit quietly on their pink sofa and, by way of pacification, they would play a VHS tape of something they’d grabbed off of TV. The rotation was pretty small, but we (my younger brother and I) were at an age where heavy repeat consumption mattered not. There was Time Bandits (which had the final scene chopped in half so Kevin’s parents never die), Animalympics, Labyrinth, Flash Gordon and Back to the Future Part II.

All of these films worked perfectly as 20-minute daily segments as they were largely episodic journey narratives which comprise of about five big set pieces. The one that we would watch the most often was Back to the Future Part II because the trilogy as a whole was considered hallowed among collected peers who all, in retrospect, seemed less interested in “fantasy” titles or, indeed, animated sports movies involving farmyard animals. We could generally get through the entire movie in a single week (fast-forwarding through ad breaks, of course) and this mode of viewing, at the time, seemed the perfect way to consume these works.

In proto-cinephilic terms, this must read like high sacrilege. A scuzzy VHS recording, with advertisements, possibly “edited for content” seeing as it likely played in a tea-time slot, and viewed not as the director intended, as a single narrative mass. Yet, this did not prevent us developing a profound adoration for the film. A Monday would get us to 2015 and we’d just about make it inside the Café Eighties. Tuesday would take us through to the re-/dehydrated pizza and “Read. My. Fax.”. Wednesday we’d make it to bad 1985 and Biff Tannen in a dressing gown. Thursday we’d be back in good ol’ 1955 and flipping through Oh LaLa magazine. And the Friday, we’d be getting the letter from 1885 assuring us that the Doc was okay.

It was a perfect set-up. In fact, it was so perfect that, years later when I developed a mild fixation with the trilogy in my early teens, seeing Back to the Future Part II in one go actually revealed how disjointed and confusing the narrative actually was, not a patch on the expert plate-spinning of the original. The razzle-dazzle production design had bewitched me in my youth. The conversational focus on the reality of Hoverboards (sidenote: a friend would repeat the constant claim that Hoverboards existed but that they were too dangerous to be released into public, and that his uncle had one) had left sane critical faculties sadly diminished. Our love for the films was such that a regular opening gambit for acceptance into our “gang” was to rank the Back to the Future films, and anyone who diverted from the standard ‘One, Three, Two’ formation, was severely chided, and occasionally beaten.

All of this aside, it’s interesting now, coming to work on the train and seeing people watching movies on phones and tablets to alleviate the drudgery of the morning commute. They, like I did so many years ago, are consuming movies in the same way that I enjoyed doing so many years ago – in bite sized chunks, only ever intervening to swipe away a pesky pop-up advertisements. The idyll of a well air-conditioned cinema auditorium and a pristine 35mm print doesn’t even enter the mind, as there are some movies which are so right, but only if you watch them in the wrong way.

It’s always morning in America, even in the afterno-no-noon.

Like Sunny D, the memory is far superior to the reality.