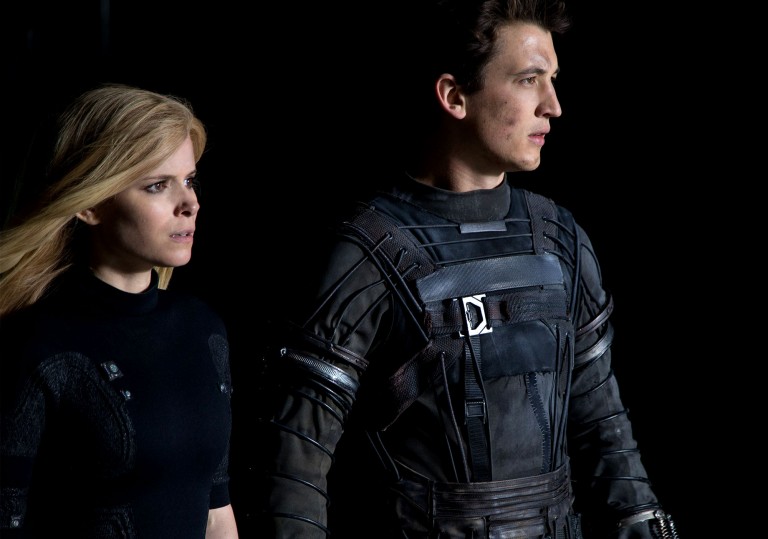 Maybe on a par with a trip to the emergency dentists.

Don't believe the anti-hype. This is a feisty B-movie that has something to say.

There's a set-up for a sequel, but if that never happens, this one will have been ample.

First the bad news… There is no Stan Lee cameo in Josh Trank’s Fantastic Four. You don’t get to metaphorically fist bump/high five/cross swords with your homeboy and/or girl in a sickening act of corporate #brand complicity, honking loudly to prove to all in the vicinity that, “I get why that’s funny”. So sorry kids. The good news is, Fantastic Four is a really good film, shorn of glib know-all theatrics, faux profundity and the spangly CG that’s usually ushered in as dramatic short hand for, “we got nuthin’.” It is, as the old saying goes, a proper movie.

It has small, meaningful character touches. It covers a spectrum of emotions in a way that is subtle rather than cloying. The characters make decisions which may appear to lack credibility, but the writing works hard to show you why these people are doing what they are doing – and it’s not just haphazard patching work, but believable reasons which build on the themes of the movie. Trank has carefully suppressed anything that might be construed as post-modern, kitsch or meta – Kate Mara’s Sue Storm spends her time listening to Portishead, a sure sign of the film’s measured throwback tendencies.

In stripping back this origin story adventure to its base elements, producing a work that one might describe as Fleischer-esque, Trank and co-conspirators actually allow ample room for deeper reading. Sure, there are times where characters state quite clearly what the thematic intentions are, but there’s always a sense that this is a sleight of hand in the writing, and that the invites to see this as something as more than it is are numerous.

This is a non-judgmental film about the vast creative power of millennials, how that power is being forcibly co-opted and skewed by older generations (aka, capitalists and militarists, mainly male), and the idealistic efforts said millennials then undertake to preserve their intellectual wares. Fantastic Four is a modern film which looks at and understands how younger generations are becoming a more dominant power base in the world, that a timeworn political hierarchy is changing as elders either scoff at the wild creations of their errant offspring, as in one scene, where they are too busy gawping at their mobile phones to spot that they are being socially usurped.

There’s a lovely moment where Miles Teller’s suburban super-brain Reed Richards invites his old mucker from the sticks, Ben Grimm (Jamie Bell), up to the highfalutin Baxter Institute in New York to be the first to test out his new invention – a teleporter that offers a corridor to a distant dimension. The first trials with live subjects have been a success, so now it’s time for some humans to make the treacherous journey.

As Reed meets Grimm in the entrance to the building, the latter is asked to go through a metal detector. Once through, the shot lingers on for a moment more than you expect it to, and Reed thanks the security guard by name. Now, that may not seem like a moment worthy of close scrutiny, but in that single line – and the jolly manner in which it’s intoned by Teller – you get a clear sense of his character, who he is, where he’s come from, and where he’s going. It’s these tiny details which make a huge difference.

Later on, once their inter-dimensional travels have transformed them into eccentric super beings, Richards asks Grimm – now a lumbering stone monster known as The Thing – whether it hurts to be inside this strange new body. Grimm’s response: “I’ve gotten used to it.” A beautiful line, suggestive that the superhero lifestyle can actually be depressing, bleak, painful, and also that Grimm has suffered a lot. This stuff is more important than all the Dolby Atmos sub-sonic rumbles you can lob at the screen. (Can you lob a rumble?)

The monomaniacal belief that energy and military might are one and the same hangs over Fantastic Four, and it’s radical in suggesting that these late-teens/early twentysomethings have partially accepted that violent conflict is perhaps all that they’re good for. They’re different films, but Fantastic Four has more in common with something like David Fincher’s The Social Network than it’s box office-dominating MCU brand brethren. The power struggle isn’t, in the end, between the newly minted quartet of wide-eyed world savers (Michael B Jordan’s Johnny Storm completing the line-up), but whether these kids will ever reach a point where their knowledge and their abilities transcend the comprehension of the generation that gave birth to them – literally and metaphorically.

The drunken justification they make for furtively hopping into their new transporter before the oldsters nab it away from them is the film’s highlight – why should others benefit from the technology they have developed? Neil Armstrong is the poster boy of the Moon landings, but what of all the brilliant people who actually got him up there? One feels that Fantastic Four is the brainy back-room boy compared to the shallow, red-carpet ready entities of an Ant-Man, an Avengers or, ugh, an Iron Man. So yeah… it’s a good film, about real things.

Maybe on a par with a trip to the emergency dentists.

Don't believe the anti-hype. This is a feisty B-movie that has something to say.

There's a set-up for a sequel, but if that never happens, this one will have been ample.