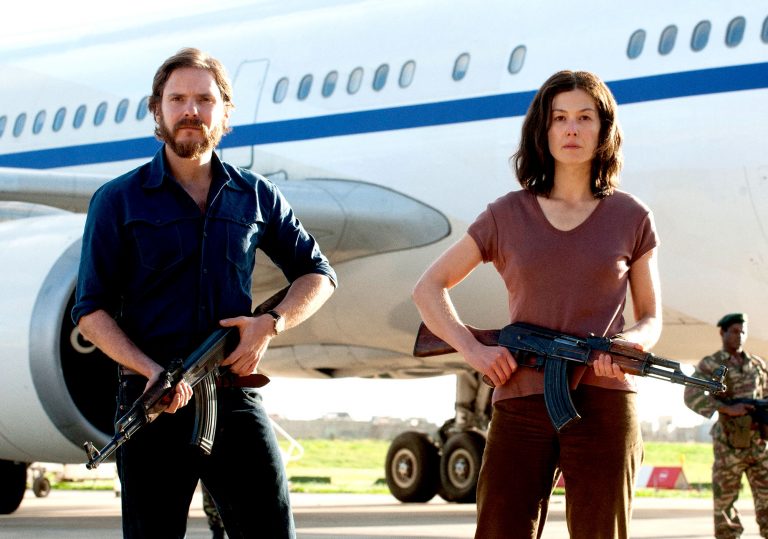 A dramatic episode in a decades old conflict.

Decent performances all round, but doesn’t have much to say.

Like the hijacking itself, you can’t help feeling it was all for nothing.

There’s a scene towards the end of this retro-styled political thriller from José “RoboCop (2014)” Padilha where Rosamund Pike’s German freedom fighter dials up her distant lover from a payphone in a Ugandan airport terminal. The setting is Entebbe, 1976, and as she issues a weary yet defiant auf wiedersehen down the receiver, you can feel the weight of history bearing down on her.

Then, in a twist that wouldn’t feel out of place in a Two Ronnies sketch, Padilha and screenwriter Gregory Burke torpedo the emotional centre of their movie by having a kindly airport security guard inform Pike’s character that the telephone she’s using – the one she’s just poured her heart out into for two straight minutes – is out of service, but she’s welcome to try again from the bank of phones over in that corner.

It’s a baffling moment and evidence in microcosm of the film’s basic futility. Because while Entebbe is a competent enough dramatisation of the audacious hijacking of an Air France flight and the even more audacious rescue mission that followed, the wider significance of this true story is never really explored.

The film operates chiefly as a character piece: on the one side is a group of left-wing radicals fronted by Brigitte Kuhlmann (Pike) and Wilfried Böse (Daniel Brühl); on the other sits Israel’s top brass including Prime Minister Yitzhak Rabin (Lior Ashkenazi) and Defence Minister Shimon Peres (Eddie Marsan, late for his The Death of Stalin audition); and in the middle Nonso Anozie emphatically steals the show as Uganda’s chuckly despot Idi Amin.

Owing to the highly sensitive and ongoing nature of the Israeli-Palestinian conflict, it’s perhaps understandable that Padilha reconstructs this controversial incident without comment. As a result, though, it feels like an opportunity missed.

A dramatic episode in a decades old conflict.

Decent performances all round, but doesn’t have much to say.

Like the hijacking itself, you can’t help feeling it was all for nothing.